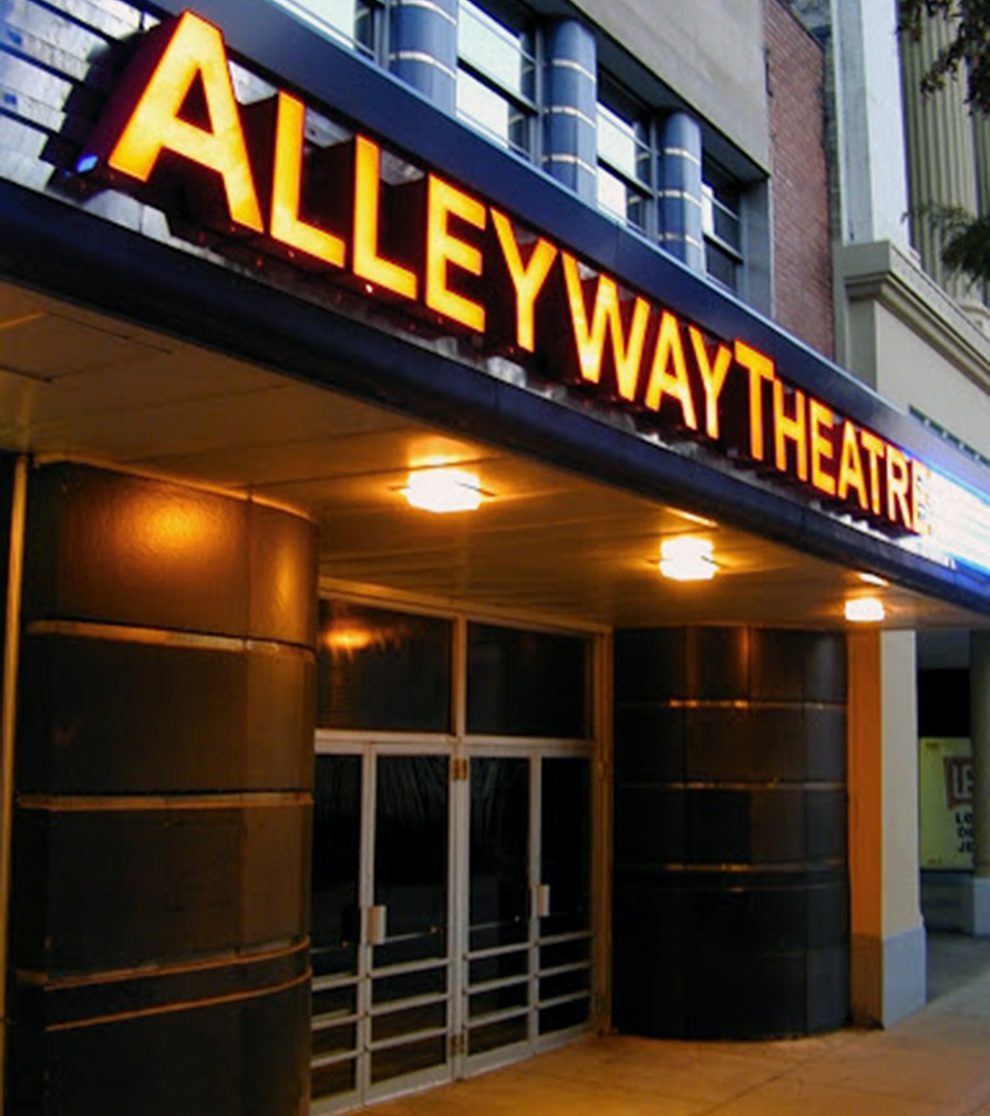 In 1980, Neal Radice founded the Buffalo Theatre Collective, a small group of theater artists who were basically a gypsy company performing in various locations. The company’s mission was primarily to produce new works, and it remains true to that mission to this day. They finally found a permanent home in 1983 after Radice negotiated a lease for part of an old Greyhound Bus Terminal on Main St. in downtown Buffalo. The building has an alley running between it and Shea’s, hence the name Alleyway Theatre. The rest of the building was occupied by the Buffalo Police Dept.

In April 2001, following the departure of the Buffalo Police, the company took exclusive occupancy of the 34,000 sq. ft. building. The $1.5 million renovation of the historic Art Moderne structure was completed in September 2005, resulting in the creation of an impressive grand lobby and the 70 seat Main Street Cabaret. Since 2014, gay oriented BUA has often used both the cabaret and main stages.

Alleyway Theatre is celebrating its fortieth anniversary with a change in leadership. This past May, founder and Executive Director Neal Radice departed from Alleyway Theatre after forty years. The plan for this transfer of leadership was set in motion two years ago, and in that time, Radice has been training Chris Handley to take over for him. Handley has been working as Associate Artistic Director at Alleyway for the past two years, and said that taking on the role of Executive Director is “a dream come true.”

Radice said, “Stepping back is my decision, and I don’t like it. However, it is the right thing to do for the further health of the organization. I will be leaving Alleyway in every way. I feel it is important not to put the new leadership in the position of having me looking over shoulders.” He is confident in Handley’s ability to lead the organization. He said that he has the comfort of knowing that the organization he has dedicated so much of his life to “is in good hands” and said that Handley “is multi-talented. He is well-liked and has an even disposition.” Radice looks forward to “sit[ting] back and watch[ing]” what Handley does for Alleyway.

Handley plans to maintain some of the beloved traditions that Radice has built up over the past forty years. This includes Buffalo Quickies and the annual performance of A Christmas Carol. Throughout April and May this year, Alleyway put on virtual Buffalo Quickies (short plays written by Buffalo locals) during their 6-week series of weekly Live Brunches. The videos are available for free here on Alleyway’s website. Unfortunately, A Christmas Carol will not be able to run in person this year due to the Coronavirus, however, the tradition will continue in future years.

One thing that will be changing at Alleyway is the Executive Director’s approach. According to Handley, Radice “did everything” at the theater, from writing the shows to designing and directing them, while Handley himself says that “I don’t do everything that Neal does, but I do have a network of people who are really great at what they do… collaboration is a huge part of what I do.” As such, Handley will be expanding the crew that works on any given production, bringing on people such as lighting and set designers. In order to afford to bring in more people, Handley said that he plans to “continue building on Alleyway’s history and reach out to new audiences.”

Reaching out to new audiences might seem like a big lift but Anthony Chase, founder of the Artie Awards and cohost of WBFO’s Theater Talk is optimisitic.

“Neal leaves Alleyway Theatre both on very solid footing and with great potential for growth,” said Chase. ” Neal earned the theater a strong reputation for stability and as a starting place for countless theater artists.  Chris has a chance to build on that. Chris is not locked into anything except a commitment to new work. When he tells you that he wants to take an important look at what stories Alleyway is telling onstage, and whose stories they’re telling, and why they’re telling them, I think you should take him at his word and consider that literally. At a time when theaters are examining their commitment to diversity and access, Alleyway has rich potential for development and growth. The theater is well-positioned in its downtown location, right next door to Shea’s, on numerous transportation lines, and smack in the middle of East Side and West Side. I expect that Chris will quickly give Alleyway a new sense of, to use one of his favorite words, “relevance,” and stronger connections to cultural richness and diversity of Buffalo.”

Handley said that Alleyway’s focus will continue to be performing new plays, and he wants to lean into that creation. He said that “it is really important that Buffalo has a place where that development process [of a new play] can happen” and he wants Alleyway to be that place.

To support this, another tradition that will be continuing is the Maxim Mazumdar New Play Competition. While there has been an entry fee in the past, Alleyway eliminated that fee this year which, according to Handley, well over doubled their number of entries. He said “that means a lot more work on our end, but it is work worth doing in order to find the right play for the right moment.”

In that vein, the Fall season for Alleyway, which will feature only online performances, will have a focus on the current time and the way that people are dealing with current struggles. There will be a new works festival including four projects that Alleyway is commissioning. One will feature local artists in solo performances, and the other three are designed specifically to be digital, whether on Zoom, Twitch, or any other social media video platform. This is the kind of adaptation to relevance that Handley is bringing to focus.

Alleyway Theatre will miss Neal Radice’s leadership, but Chris Handley will lead the theatre into a new chapter of growth and adaptation.