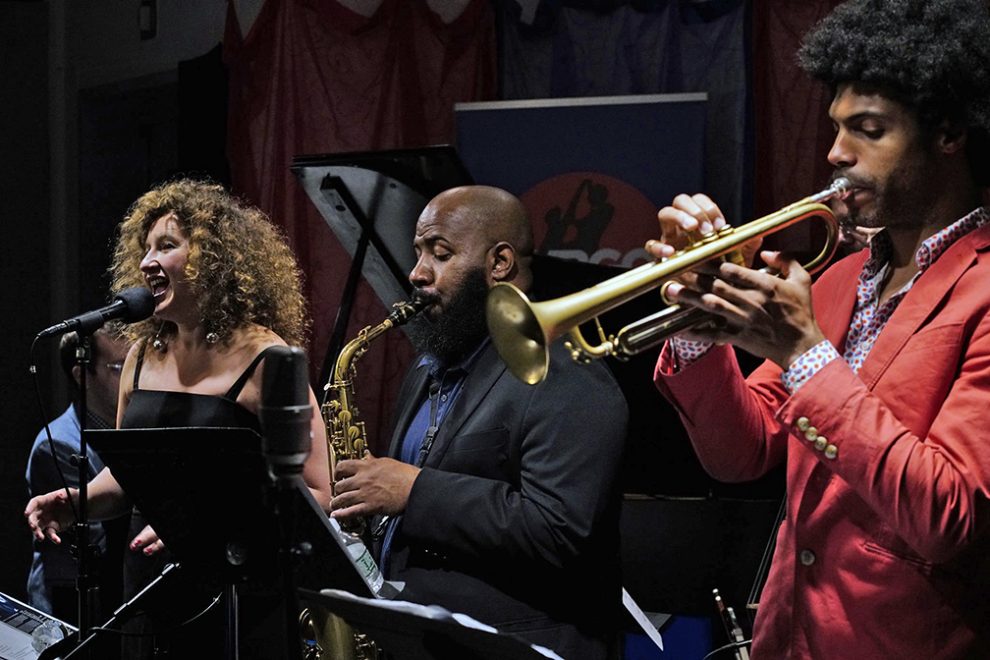 In the face of multiple concert cancellations and postponements, Artpark has been actively developing new and adapted programs that will bring the community both relief and inspiration while practicing social distancing and all COVID-19 related precautions to keep visitors safe at all times.

Music in the Woods is a series of FREE, eclectic and intimate Sunday performances set outdoors in Artpark’s scenic Lower Park Emerald Grove area, overlooking the Niagara River. While fully-adapted, or in some cases specifically designed for social distancing, the concerts will present a slate of major national and local talent in concerts ranging from jazz to baroque and new music. All events, unless noted, will be held in Artpark’s Emerald Grove (South 4th Street Entrance).

The series will kick off with a series of drum circles led by Stephen Bell of Unity Through Rhythm. Chairs and drums will be provided. Participants are also welcome to bring their own.

Stephen Bell is a retired educator having spent 32 years in education, the final 21 years as Middle School principal in the Springville-Griffith Institute CSD. Forty-nine years ago, he was introduced to hand drumming and the mesmerizing pulses of African rhythms. The enjoyment Steve received in working with staff and students and his life-long involvement with percussion led naturally to facilitating drum circles – a perfect melding of two passions. He has pursued training in facilitating circles for wellness and full participatory enjoyment. This comprehensive training has included workshops in rhythm circle facilitation, sound empowerment, and drumming for wellness, leading to his accepted membership in the International Drum Circle Facilitators’ Guild. Through an intense two-day training Steve recently received certification as a Health Rhythms Facilitator.

Attendance is limited to 25. Visitors are asked to RSVP at least 24 hours prior to: artpark@artpark.net

Back by popular demand after their Artpark performance in 2018 and Jazz Buffalo’s presentation in 2019, Svetlana & The New York Collective is one of New York’s most beloved swing bands known for their signature vintage-inspired sound, foot–stomping groove and exciting stage presence. Svetlana and her band have released the chart-topping Night at the Movies (debuted #1 on the US Billboard Traditional Jazz Album Charts / #2 on Jazz Album Charts) in 2019 and have headlined sold-out shows in premier US venues and abroad. “Outstanding band” (Wall Street Journal) and “NYC darlings” (TimeOut) “Upper Echelon of Joy” (Pop Matters) “Exuberant foot–stomping music that combines New York swing with pop singer/songwriter sensibilities.” (WPIX 11) http://svetlanajazz.com/. Attendance is limited to 50.

The UB Faculty Jazz Quartet (Bobby Militello – sax and flute; George Caldwell – piano; Sabu Adeyola – bass; John Bacon – drums) features some of the most experienced jazz musicians in the WNY area. Their credits include Dave Brubeck, Ahmad Jamal, Maynard Ferguson, Count Basie and the Duke Ellington Orchestra. The group performs music from the Great American Songbook and jazz standards. For this program the group will feature vocalist Alex McArthur, a rising star on the local scene, who is a former student of the quartet members in the Jazz program at UB. Attendance is limited to 50.

Described by The New York Times as “…one of the most vital and original ensembles on the American Music scene,” Alarm Will Sound (AWS) will present John Luther Adams’ Western New York premiere of “Ten Thousand Birds” written especially for AWS. The piece is based on the songs of birds that are native to, or migrate through the area in which the piece is performed. It explores the connections between nature and music, a topic that Pulitzer Prize and Grammy Award-winner John Luther Adams has pursued over the course of his remarkable career and is a common theme in Artpark’s programming.

“We’ve designed this performance so that the musicians and audience can move around each other, always at a safe distance, listening from changing perspectives while surrounded by the music.” Alan Pierson, Artistic Director, AWS

“One of my greatest hopes for my music is that it may be of use. So I’m thrilled that Alan and the musicians of Alarm Will Sound have found such a creative use for “Ten Thousand Birds.” At this difficult moment, it’s more important than ever for us to remember our connections with the larger-than-human world, and to celebrate the never-ending music of this miraculous planet that is our one and only home” said John Luther Adams.

The performance is funded in part by Mid Atlantic Arts Foundation and Music in the Woods series funders New York State Council on the Arts, Thomas B. Burrows and HSBC Bank

This delightful and unique Baroque program with a theatrical flare will feature an eight-piece ensemble led by music director Moshe Shulman with some of the best WNY musicians and special guests countertenor Eric Jurenas, pianist Sergei Dreznin, and a very special surprise by artist Uta Bekaia. The program will include some of Baroque’s most romantic arias such as Purcell’s “Dido’s Lament,” Vivaldi’s “Sileant Zephyri” and J.S. Bach’s “Erbarme Dich” and more.

American countertenor Eric Jurenas, praised by The New York Times for his “beautiful, well-supported tone and compelling expression,” has been featured on some of the world’s largest and most reputable stages. His dedication to Baroque-era music, newly-created works, and everything in between, has established him as an influential voice. http://ericjurenas.com/bio/

Sergei Dreznin is a Moscow-born, New York-based pianist and composer. Trained in Russia’s finest music schools, he has won prizes and critical recognition in Russia, Europe and the United States. He is one the world’s most versatile musicians, with 17 music theater productions realized in Vienna, New York, Madrid, Moscow and Paris. The New York Times recognized Mr. Dreznin’s “virtuosity… grace, pliancy and confidence” and “seemingly limitless reserves of volume.” He appears regularly at the prestigious music festivals including Bard Music (New York), the Sviatoslav Richter in Tarusa, Russia and Annecy Classic in France.

The Buffalo Jazz Composers Workshop performs all original modern Jazz compositions and has collaborated with writers, poets, actors, singers and other artist to create their own unique sound. With the pandemic quarantine the group has continued to meet remotely and has collaborated on a series of new compositions related to the challenges of this time. This will be the first public performance by the group in many months and is sure to express the unleashing of their collective creativity. The band includes: Sara Rogers – vocals; Tim Clarke – trumpet; Nelson Rivera – saxophone; Ken Kuriscak – saxophone; Alec Dube – vibraphone; Jared Tinkham – guitar; Joe Goehle – bass; John Bacon – drums.

Attendance is limited to 50

These programs are limited to a small capacity and patrons must reserve their attendance in order to ensure a spot at least 24 hours prior to each event by emailing: artpark@artpark.net

Adjacent to the performance area Art Bar will be offering snacks, beer, wine and other beverages.

All concerts in the Music in the Woods series are FREE. Artpark is a not-for-profit organization and COVID-19 has significantly impacted our events and greater mission of creating, nurturing and presenting the arts in its many forms. Artpark asks patrons to consider contributing to Artpark Live: A campaign for a vibrant future: https://www.justgiving.com/campaign/artparklive

Artpark and all above listed programs are complying with current COVID-19 safety guidelines, required by the Federal and the New York State authorities. We will ask our visitors to exercise social distancing practice, wear masks, use cleaning stations available throughout the park and follow Artpark attendance guidance during the programs.

Please check artpark.net or consider joining the Artpark e-list for updates on these and coming events.

Interview: Jano Manzali on Making Film Scores Sound Fresh and Unique
How to Find CBD Oil That can Help De-Stress