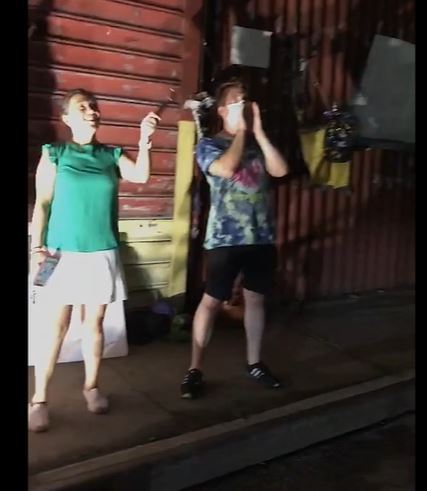 Taking a shift in tactics – the weareasyou dance protest group [AKA The Forgotten Ones] has admitted their Nxivm connection. In addition to one of their founders, Eduardo Asonsolo, disclosing it on a podcast, the group has issued a press release on their website issued admitting their relationship with Keith Alan Raniere, the Nxivm leader.

In my opinion, it is an excellent thing that the Forgotten Ones have admitted their association with Raniere. Now, they can protest and dance without misleading others. Their ostensible cause is a good one.  This is one of the more honest statements made by anyone connected to Nxivm seen in a long time.

In their press statement, they say that Raniere has been punished for the dance group and moved to a different cell so he cannot see the dancers.

Here is their press statement:

On July 3, three friends visited the parking lot of Metropolitan Detention Center (MDC) in Brooklyn to wave to their friend Keith Raniere, who has been detained there since April 2018.

Those incarcerated at this facility have had very limited communication and experienced harsh restrictions due to COVID-19 lockdowns. At first, they were given only five minutes outside their cells daily to shower, make a phone call, buy from the commissary, etc. And yes, it’s as impossible as it sounds.

Eventually this time was extended to an hour, and now three, but they still haven’t been allowed any visitors, including attorney visits, since March, and have been told that may continue until next year.

In addition to being deprived of basic medical attention or proper COVID precautions, the men are subject to invasive raids and violent and punitive treatment. The conditions inside are worse than what most people would accept for their pets.

During that first visit, it was evident that the conditions and scarcity of communication with anyone on the outside made every little gesture that much more meaningful and precious.

In the absence of humanity, even a flickering light in the distance can be a beacon of hope. At first it was just waves and flashing lights, then one of the friends did a moonwalk and more men started to come to their windows. The subtle feeling of connection was so uplifting, she cranked up the car stereo and started to dance.

Suddenly there was a cacophony of banging on the windows and, in that moment, the movement was born. Every night since, more people have been showing up to dance and show support for those who have mostly been forgotten. The movement is intended to honor the humanity of all the forgotten ones, starting with those behind bars.

The team receives messages and phone calls every day from friends and family who are being told by their brothers, husbands, cousins and fathers that there are people dancing in the parking lot and how much they love the show.

In the midst of bad news, like court dates being pushed indefinitely, the dancing and human connection is a welcome reprieve. Also, loved ones who haven’t been able to visit, or who live far away, are touched by the gesture and the ability to feel closer through the Instagram livestream.

The gratitude, while heartwarming, exposes issues within our culture and justice system that should be unconscionable in a so-called civilized society. Treating anyone as less than human, no matter what their circumstance, background or belief system, goes against the very foundation on which this country was built.

While the spirit of these gatherings is one of service, without political agenda, the response is already shining a light on the oppression within our system that is otherwise hidden. What happens from the time of arrest, to trial, to sentencing and thereafter in this country is largely under veil. There is a deep need for transparency and accountability on an individual level because the transgressions taking place within the system are an effect of personal decisions.

Rather than asking, how did this happen? We should be asking, who made this happen? For example, because of the prejudice in the media against Keith Raniere and his friends, individuals armed with hate and lies are trying to hijack this peaceful movement and make it into something it’s not.

Keith was promptly punished for writing an email about how wonderful it was to see his friends connecting with and recognizing the men inside. Keenly aware of the dire need for humanity inside, Keith encouraged the movement to expand, with the hope that anyone with friends or family who are incarcerated could gather and dance like this at facilities across the country.

Although Keith was moved so he could no longer witness the dancing, his friends and others continue to show up because this is about restoring humanity to the people inside and bringing joy to the forgotten ones. For this reason, the show must go on, and the punishments that run rampant within our prison system must be seen and addressed.

While speaking up about these issues is highly dangerous, both for people inside and outside, it is a moral imperative for anyone with a voice and a conscience. The individuals who enact these crimes against humanity behind closed doors must be held accountable and it is up to the public to say “enough is enough.” It is equally important to remind the recipients of this oppression that they are not forgotten.

No matter what amount of hate, fear or prejudice is unearthed in this process, what matters is that we show up and not get distracted. Love and human connection conquers all, and through these acts of joyful expression and humanity, we hope to inspire others, whether they have loved ones inside or simply love in their hearts, to join these efforts.

Honey Traps and Kompromat — a Closer Look at the Life of Ghislaine Maxwell and Her Father, Robert Maxwell
Nxivm’s Eduardo Asunsolo, Appearing on Podcast, Admits Nxivm Connection to MDC Dancers – Calls Out Attorney and Media for Persecuting Nxivm Like Nazis Did to Jews