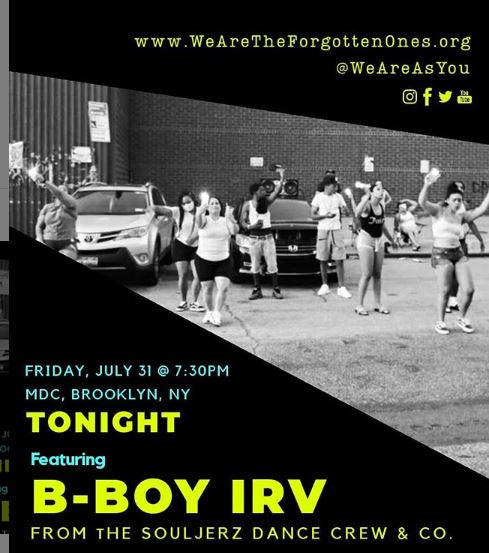 The Forgotten Ones are no longer dancing nightly in front of, and behind, the Brooklyn Metropolitan Detention Center.

Their switch from front to back seemed suspiciously like they were following a switch of cells for Keith Alan Raniere, a detainee at the MDC, who the dancers follow as their leader.

But they will be dancing tonight!

“Aaaaaaand we’re back! @bboyirv and the Souljerze Dance Crew will be turning up the heat again with drumming and break dancing. Join us tonight at 7:30 at MDC Brooklyn or here via livestream. See you then!”

They will start at 7:30 pm tonight and dance for one hour.  After that, they promise they will dance at least once per week.

But don’t count on it.

The Forgotten Ones, who started out with the nameWe Are As You, began their nightly dancing on July 3, and danced every night straight until July 25. They came out at 8 pm and danced until 9. Usually, there were anywhere from four to 7 or 8 dancers.

On July 25, the dance-protest group announced that, after due consideration, they would reduce dancing from nightly to at least once per week:

“As is essential for any new movement, we are taking the time to process the past few weeks, listen to feedback from those we serve, and evaluate the best way forward. In order to sustain the momentum for the time being, we will be showing up at least once a week and continuing to offer support to those inside and their families.

“As is essential for any new movement, we are taking the time to process the past few weeks, listen to feedback from those we serve, and evaluate the best way forward. In order to sustain the momentum for the time being, we will be showing up at least once a week and continuing to offer support to those inside and their families.

“Our next dance event will be this Friday, July 31 starting at 7:30pm.

“Dancing outside the prison each night has inspired a type of connection and joyful celebration that stands in stark contrast to the conditions and oppression experienced by incarcerated populations across the country. In just three weeks, we’ve connected with countless people inside and outside the prison walls; we’ve celebrated birthdays and witnessed reunions; and, most of all, we’ve connected with the deep need for change that will fuel all of our future endeavors.

“If you are interested in joining our efforts and being a part of this growing community of people affected by the criminal justice system who wish to see change, we would love to hear from you.”

According to one of our MDC sources, Raniere has been moved to an inner cell and cannot see the dancers and they can’t see him peering from his prison window. It appears Raniere was moved deliberately by prison officials.

The Forgotten Ones also confirmed Raniere was moved. They wrote in a press release:

“Keith was promptly punished for writing an email about how wonderful it was to see his friends connecting with and recognizing the men inside. Keenly aware of the dire need for humanity inside, Keith encouraged the movement to expand, with the hope that anyone with friends or family who are incarcerated could gather and dance like this at facilities across the country. Although Keith was moved so he could no longer witness the dancing, his friends and others continue to show up because this is about restoring humanity to the people inside and bringing joy to the forgotten ones. For this reason, the show must go on, and the punishments that run rampant within our prison system must be seen and addressed. While speaking up about these issues is highly dangerous, both for people inside and outside, it is a moral imperative for anyone with a voice and a conscience. The individuals who enact these crimes against humanity behind closed doors must be held accountable and it is up to the public to say ‘enough is enough.’ It is equally important to remind the recipients of this oppression that they are not forgotten.”

But the show is not going on now – at least not nightly anymore.

It is curious also that in The Forgotten Ones’ statement that they mention they “listen[ed] to feedback from those we serve.”

Who do the Nxivm DOS slaves serve other than Raniere?

It’s also curious that the group is now using the following domain name: wearetheforgottenones.org – which would suggest that they trying to portray themselves as a non-profit entity.  Raniere loved to use non-profit entities to hide some of his most  dangerous activities.

Meanwhile, tune in tonight on Instagram for a live feed for what may be the last dance for Nicki Clyne and the other Forgotten One dancers.

Ghislaine Maxwell Vs. Virginia Giuffre: The Making of a Sex Slave and Her Escape
MDC Dancers May Impact Raniere’s Sentence, as Well as Prison Placement
Comment