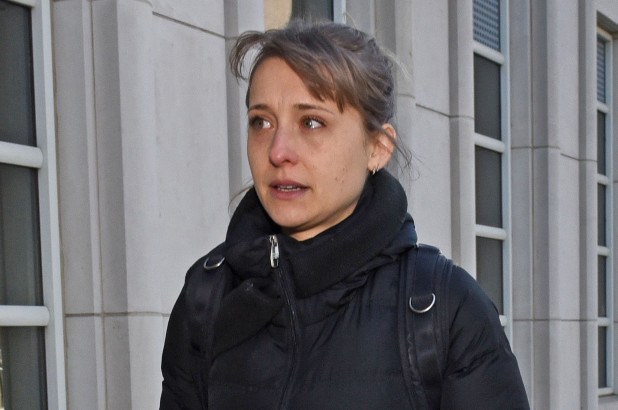 The other day Frank Report noted that DOS slave Michele Hatchette was wearing Allison Mack’s white dress – when Michele announced on Instagram that the Forgotten One dancers would not be dancing nightly at the Brooklyn Metropolitan Detention Center as they had been doing for weeks.

Normally, at these MDC dances, Michele dressed casually, if not provocatively, [considering she was dancing for male prisoners who have no contact with women] in shorts and a tank top, but when she made the announcement, she was wearing a white dress, which seems to be the same dress her slave master, Allison Mack, had formerly worn.

After Frank Report published the photo of Michele and commented that it was apparently the same white dress Allison had worn, some speculated that Michele was sending a message to Allison, perhaps in response to Allison’s communications with their group.

It is possible, some speculated, that Allison, living at her parent’s home in Los Alamitos, California, subject to home arrest, has access to a computer and can get online to see her old slaves – Michele and Dr. Danielle Roberts – and her legal spouse, Nicki Clyne. She might even be able to glimpse her slave master, the Vanguard, peering out of his prison window.

Allison may have indicated, through some form of communication to the slaves, that she is still a loyal DOS member, despite her repudiating Keith Alan Raniere, her sex-slaver master, in her allocution before Judge Nicholas Garaufis when she pled guilty to two felony counts of racketeering and racketeering conspiracy in April 2019.

She may have needed to repudiate Keith to try to lessen her prison sentence.

One of Allison’s defenders wrote in a comment on Frank Report, denying speculation that Allison is communicating with Nxivm or DOS members.  The commenter wrote,

She is not [a DOS member any more ], and she can’t have access to that info… She is still forbidden to use the internet. She is done [with Raniere] and I doubt this dress means anything but some kind of present for Raniere himself. Reminder, this dress might have been worn by Allison but nothing proves it’s hers. It was used during an event …to please Raniere.

This may be true. But Mack’s defender does not say how he or she knows that Mack is done with Raniere or not in communication with anyone in Nxivm.  Maybe Allison is fully out of Nxivm. But we have evidence to the contrary.

A former Nxivm member, who is also a former friend of Allison’s and a completely reliable source – and who has given me numerous leads, every one of which wound up being totally true – told me that Allison is in communication with at least one Nxivm member.  My source knows this because she is in communication with various members, ex-members, and those who are on the fence.

It seems, that some of them, and at least one directly, have been working on Allison – and apparently, this little girl is still conflicted.

According to my source, on some days she is angry at Keith for his letting her get into this horrible position. She trusted him and now she is about to go to prison. She is infamous throughout America and other places in the world. She got more publicity than anyone else in the cult. And it embarrassed her and her family. She is angry with Keith over that.

On the other hand, she misses him deeply, misses her life with him, and misses her sister-wives and the joy of being a slave and slave master. She had hoped one day to have his babies and raise them along with his other children with his other wives – all together. A brood of Raniere children.

She misses Jness and the women gathering together and supporting each other, learning more about what it means to be a woman, all of them united with the single goal or empowering women by being subservient to one beautiful man.

Of course, if it is true that Allison is in touch with anyone in Nxivm, she is in violation of her bail conditions and if the feds find out and can prove it, it may go harder on her when she is sentenced.

I think that would be unfortunate. I think she deserves mercy.  If she is still talking to a Nxivm member, it is possibly because she is still brainwashed.

Allison Mack is going to be sentenced. She is likely going to prison. She probably needs mental health help more than she needs incarceration.  Still, her sentencing will probably not take place for several more months at the soonest. She has a lot of time on her hands subject to home confinement and a lot of time to think of the past.

She would be well advised, even if she longs for the good old days when Keith was her sex-slaver master, to cease communications with Nxivm members. If I know about it, through the Nxivm network, then others know about it also, and that includes the Feds.

My advice to Allison is simple: Don’t make a terrible mistake and wind up getting a harsher sentence. Talking and texting on Telegram on a burner phone may not be sufficient to eliminate the chance of being caught, especially since the other party may also be caught and the Feds may be looking at this too.

Do yourself a favor. Get sentenced. Do your time and then, if you still have a compulsion to rejoin Nxivm, do it when it won’t cost you added prison time.

Unsealed Transcript of Giuffre Phone Call With Lawyers Paints Lurid Picture of Debauchery of Maxwell and Epstein — But Is Giuffre Telling the Truth?
Ghislaine Maxwell Vs. Virginia Giuffre: The Making of a Sex Slave and Her Escape