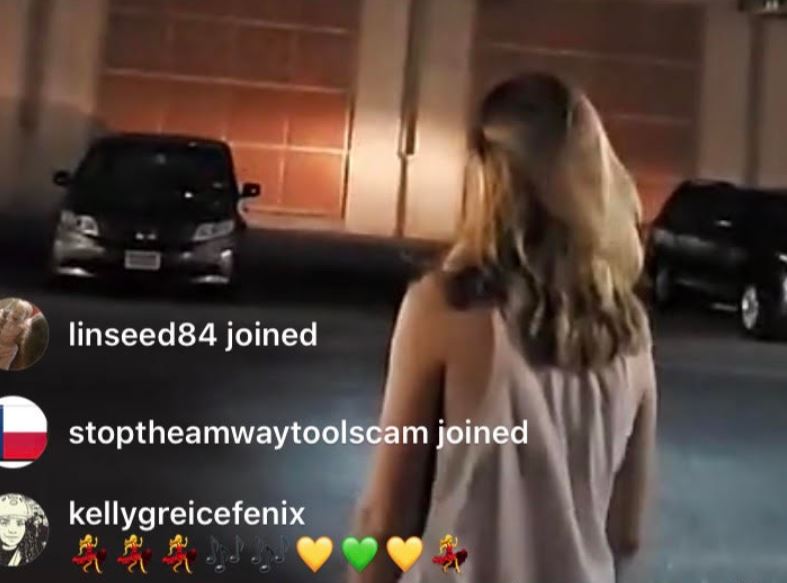 The Nxivm dancers – known alternately as #weareasyou and The Forgotten Ones – helped reveal to the public that Nxivm is alive and well and still headed by its imprisoned leader, Keith Alan Raniere.

For that reason, as we begin our series on “Who’s Still in and Who’s Out of Nxivm” – sort of a “Where are they now” retrospective – I think it is only fair to begin with them, the dancers.

The dancers, who for several weeks went nightly to dance in front of the Brooklyn Metropolitan Detention Center where Raniere is in custody, at first did not mention their association with him. Later, when increasing media coverage occurred – and identified the dancers as stalwart Nxivm members – the group admitted they were “friends” with Raniere.

The dance leader, Nicki Clyne, a first-line DOS slave master, denied to the media she was ever in a sex cult, preferring to claim she attended courses called Executive Success Programs, and was merely a student in an amazing course gearing one toward executive success.

Nicki’s executive success has been rather meager. She started taking courses when she was a successful actress on a hit TV show in Vancouver and wound up, at last notice, as an unemployed [corona-sidelined] manager/bartender at a small vegan bar called Izzy Rose in Brooklyn.

She arguably reached the height of her success when she was chosen to be part of a group blow job – with Lauren Salzman, Allison Mack, Daniela Padilla and Loreta Garza – to be performed on the spectacular Keith Raniere.

But the best laid schemes o’ slaves and man gang aft agley. Her Vanguard was arrested before she could plant, along with four other sister wives, her succulent lips on his flaccid and worshipful member.

She is still faithful to her Vanguard, that’s evident. More than two years after his arrest, she is out there dirty dancing for him [while denying she was ever in a sex cult.].

See video of Nicky shaking it up below the MDC.

Of course, we should be a little patient. Everyone has to wake up themselves in their own time and at their own pace to the falsehood that is Nxivm. We ought to be patient with Nicki and the remaining dancers and, for that matter, all those who remain in Nxivm.

But still there is an important balance to be achieved. That balance is hoping that the Nxivm members will wake up and give them some privacy until they do versus realizing that they are in a cult led by a pernicious leader and the need to protect the public from their recruiting others into the cult.  This is the reason I have named Nxivm members, including DOS slaves: In order to make their names available on search engines so that when they try to fulfill their directive to recruit women as slaves, an intelligent online inquirer can easily find out that branding and blackmail may be in their future.

In addition to publishing their names for the protection of others, it has proven at times to help the slaves themselves. More than a few former slaves told me that they were at first offended by Frank Report and what I wrote about them but later got to thinking about it and, through introspection, realized that most of the world would think them fools. This has helped some, I was told, to get out of Nxivm and DOS. I’m proud of that.

There are others too. And in our next post, we will explore other current members of Nxivm.

Right now, it could be argued, as the dancers reduced their nightly dancing to just once a week, that they are just pathetic. They are, after all, not likely to win many converts, and everybody is watching them dancing, knowing that their dance is for Raniere.

Later, perhaps, they will repent their dancing and repudiate him.

Finally a word on Nicki Clyne. Sources have said that she is ready and willing to go to prison for her Vanguard, to be a true martyr for the cause.  That may be true or not. Allison reportedly said the same thing but when faced with decades in prison, she quickly took the best available plea deal and repudiated her master. {We will explore in a subsequent post whether or not that repudiation still holds true.]

But not too long ago, Nicki, during a Nxivm Halloween gathering, prior to Raniere donning similar garb following his arrest, came costumed as a prisoner.  It was perhaps meant as a joke, but there is still a chance, however remote, that she might yet be arrested for her role in racketeering and trafficking sex slaves.

Stay tuned for Part 2 of Who’s Still in Nxivm….

Click here to post a comment
Raniere’s Mind Bending Was Designed to Deeply Damage Nicki Clyne and Allison Mack’s Sense of Self
Life After Nxivm? Emiliano Salinas Has New Business Plan – to Get Electricity Contract for Baja Mexico – as He Walks From Nxivm Unscathed and Untouched