Award-winning producer Sarah Verstraete is no stranger to technical and logistical challenges. You could even say that she enjoys taking on projects that require new ways of thinking and the discovery of innovative solutions to whatever problems may arise.

Verstraete has been a producer with Neymarc Visuals for almost ten years, during which time she has produced commercials and short films, several of which have garnered industry attention and several awards as well.

But the short film ‘Happy Valentine’s Day’ remains one of her favorite projects. The short has racked up hundreds of thousands of views online and was shortlisted for a Cannes Lion award, among other honors that Verstraete discussed during our interview.

When we spoke with Verstraete, we asked all about the short and what it took to take the concept from the drawing board to the stunning final product.

If you’d like to watch the short for yourself, you can find it here. Otherwise, we hope you’ll enjoy our conversation with Verstraete, which you’ll find below.

We’d like to talk about your short, ‘Happy Valentine’s Day’. When you first had the idea for this short, did you have any idea that it would become so popular?

When the Neymarc Brothers told me about this idea they had for a short, I read the script and immediately fell in love with it and was convinced from the start that this short would distinguish itself because the story is told in one camera sequence, in reverse, and in slow motion.

That being said, I couldn’t have anticipated it would go viral on Facebook, receive a Vimeo staff pick, become a finalist for a Cannes Lion, and lead to the directors being signed by WME in Hollywood.

Those are some of the happy consequences of pursuing this dream of seeing our story come to life.

About how long was the pre-production phase for this short?

We produced this short film independently with a minimal budget which means every resource we had needed to be allocated in the right way, which required a lengthy and strategic pre-production process of six months.

Due to budget constraints, we couldn’t afford to block an entire New York City intersection, so we had to completely create a New York City street in CG.

To properly integrate our real actors into this virtual environment, we had to custom build a 360-degree green screen arena that enabled us to control all aspects of the lighting and of the background elements. 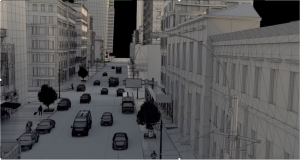 We knew it was going to be a tremendous technical challenge so we established all the details down to the millimeter at the animatic stage during pre-production. Six months is a long time but when you’re dealing with such complex elements to figure out, it’s the time you need to take to make sure you get everything right on set!

Were there any specific images you didn’t know how you would be able to achieve?

The fall sequence when our hero falls upwards after having crashed into the taxi was a scene I was most concerned about.

We had to bring in a taxi to be shot over green-screen and had to rig our actor, Alexei Bondar, on stunt cables. The complexity of shooting this scene was in finding the right balance for the falling motion of the actor who was suspended in midair, hooked to a stunt vest.

The actor had to simulate falling over thirty floors but only had five feet range of motion. Typically, a production like this would require a large studio with a very high ceiling made for an actor to perform the stunt practically in order to achieve realistic results.

We had to get creative and use large fans to simulate the wind and use precise rotation to trick the shot. Thankfully we had a great stunt coordinator, Drew Leary, who helped us achieve the desired look.

Was this your first time producing something that required so much green screen and VFX work?

This project is the first big project I ever produced. Everything that is seen on screen has been entirely and meticulously modeled, textured, composited, and rendered in 3D.

We wanted to create the most accurate world so that it looks stunning and flawless, and matches the different emotions the story tells. My entire team at Neymarc Visuals is self-taught so it was definitely a learning experience for all of us.

It was scary for me at first as well as stressful along the way but in the end, it felt so empowering to have succeeded in my mission and to have acquired new skills in the process.

My favorite productions so far have been the ones that had challenges I doubted I could overcome because those are the ones where I learn and grow the most.

What was the casting process like for ‘Happy Valentine’s Day’?

Casting for ‘Happy Valentine’s Day’ took about two months. Since the short has no dialogue and the set was mostly green screen, each cast member needed to deliver a very visual performance in a non-immersive environment and in just a few seconds.

So it was important to take the time we needed for the auditions to figure out which cast would be the best fit.

The roles for the tackle scene and for the man that gets cheated on were the most complex to cast.

For the tackle scene, we needed to match the right cast together to be able to show the most chemistry on screen in such a short amount of time so that the audience understood that a new couple was about to form. As for the man who gets cheated on, we needed an actor that could deliver the right amount of emotion so that the audience could experience the switch from excitement to heartbreak through him.

Alexei was the perfect match for this. The performance he was able to deliver with the subtle smile he does when hearing his wife laugh makes what unraveled right before this scene so much more heartbreaking. It gives the ending this perfect bittersweet moment.

What was the biggest challenge of shooting the short?

The greatest challenge of this piece was to accomplish a very long and complex camera shot in a very small space.

Because of the studio’s spatial constraints due to our budget restrictions, we had to split up the film into four separate sequences that would then be stitched together later. Months of pre-production were spent calculating where the camera would start and end for each sequence so that the transitions would be seamless.

Our transitions were made thanks to the completely virtual, CG New York City street, which we modeled, textured, and animated from scratch ourselves over the course of six months, with only three artists, led by Michael Tan, VFX Supervisor.

An amazing technical feat that got noticed! The short was shortlisted at the renowned Cannes Lions in the Visual Effects category.

It’s a huge honor to have our short considered and to have been judged amount the giants of creativity, advertising, and filmmaking! ‘Happy Valentine’s Day’ was screened at the electronic theater of Siggraph Los Angeles, the biggest annual computer graphics conference in the world.

After all of the short’s success, have you considered creating another short in a similar style?

Not in a similar style per se because I like producing content that adds something new each time so I have my sights set on something I have never done before: producing a long narrative format.

I am excited to say I am currently working on producing the feature film script written by the Neymarc Brothers, called ‘Timeless’.

‘Timeless’ is a drama with a touch of sci-fi, in the vein of ‘Her’ and ‘Ex-Machina’. The story is about a future where advances in medicine allow the talented to stay young forever. A woman exempt from aging struggles to give her beloved twin sister the same opportunity.

This film’s story spans a century, so it will definitely have its fair share of challenges!