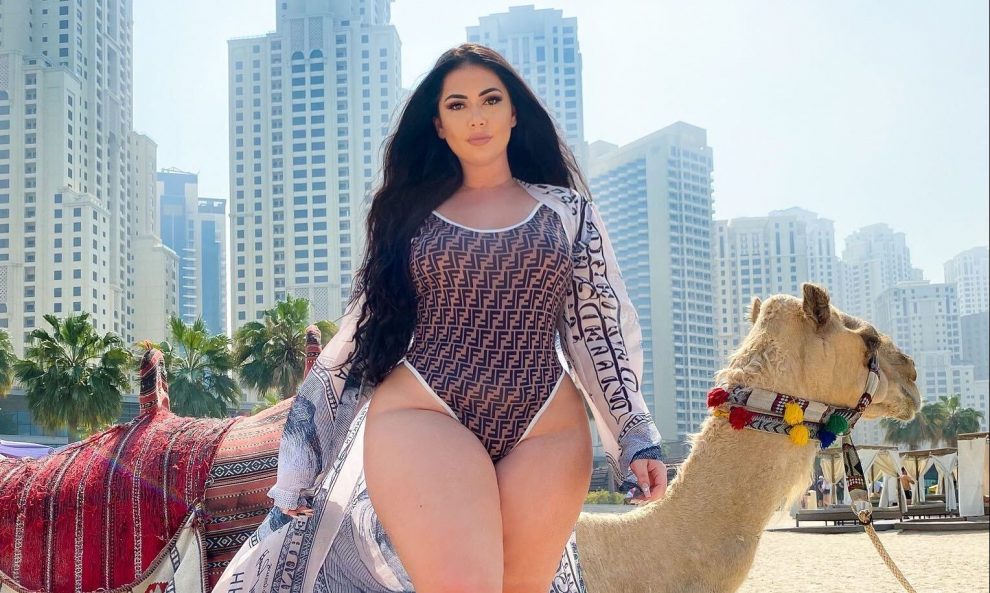 It’s rare that it reaches 100 degrees in the suburbs of Portland, Oregon.

Even rarer still is the presence of an all-gold Dodge Challenger, its reflection giving the appearance of a bejeweled shooting star pulling into the parking lot.

This one also has a vanity license plate – “Sammyy” – that enhances the car’s extraterrestrial appearance.

The Challenger’s occupant exits and joins me at a table. As she takes a seat across from me, a group of 20-somethings not too far away becomes intrigued.

More stares start to accrue from the outdoor mall goers. Next up is a young couple pushing a stroller, followed by the employees at the coffee shop I had just exited.

A minute ago, neither myself nor the table I was at seemed to warrant much, if any, attention.

You can get the sense that “somebody” just entered the premises, even if they’re not quite sure who that somebody is.

I can tell that the attention phases me more than my recently-arrived guest. Despite the now fishbowl-like dynamic between the two of us and the mall-goers, she seems to barely notice.

Then again, when you have more than 2.5 million followers on instagram and nearly half a million more on Tik Tok, being recognized by random passerby doesn’t come as a surprise like it would for most.

I distinctly remember the plethora of classmates I graduated high school with who promised to one day grow up and become “rockstars.”

Unsurprisingly, I haven’t heard from any of those classmates since. What is surprising is how anachronistic the notion of being a “rockstar” has become.

The reality is that “rockstar” should probably be replaced with a new term – ”influencer.” Sure, it’s not quite as catchy, but it’s far more accurate when describing the world’s latest (and perhaps most enviable) celebrity class.

These days, very real rock stars have nothing on the modern day Influencer.

Influencing by the numbers

What little data on the subject tells us is that, in 2016, social media influencing was just under a $2 billion industry ($1.7B, for those with a penchant for exactness).

In 2020, estimates tell us that the sector is likely to surpass the $10B mark. 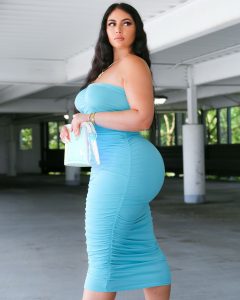 While that may not seem like a lot of money, think of it this way – in a little under 4 years, the size of the influencing industry grew 500%.

Should the industry continue on its current growth trajectory, it will become a $50B industry by 2024.

To put this in perspective, Goldman Sachs estimates that the total value of all recorded music streaming will grow to about $30B by 2030. That means that it will take some years for music to reach just half of what influencing brings in annually.

By some metrics, influencers have become more relevant as celebrities than their musical counterparts. It’s happened quickly; adults who use social media religiously often can’t see it.

But real professional influencers are out there. As a crowd begins forming near our table, I begin to witness firsthand what these ridiculous financial statistics truly mean.

Since 2014, Samantha Krieger has gone by a number of different names. These days, she’s known as Sammyy02k.

Despite her reluctance to do in-person interviews, she’s agreed to be the subject of an Artvoice feature on the rise of social media influence.

And while Krieger can exercise her massive reach with just a few taps of a smartphone, a lot of misinformation about her continues to circulate.

As part of her agreement to the interview, I offer to help clarify the basics about just who exactly she is.

Samantha Krieger was born in Portland, Oregon. For some years, she was no different than you or me, working tedious retail jobs and driving a non-gold car.

At Lakeridge high school, she was dealt with taunts from wealthy classmates. It’s likely these experiences would activate whatever latent stardom was already within her.

After graduating from Portland State University in 2014, Krieger had a vision.

She suspected, correctly, that it doesn’t take much to at least get started as an influencer.

You need photos and/or video, sure… but given the prevalence of acceptable cameras on the backs of phones, finding a suitable recording setup was simple.

The second ingredient Krieger inferred was something less tangible – the courage required to be exceptional.

Despite her natural shyness, she had ambitions that extended beyond what she thought her bachelors degree would help achieve. Then, one day, it clicked.

“You could say I decided to become an ‘antisocial social media star.’”

“I did what I wanted to do, and I knew there was going to be a way to make it work for me.”

Like any new profile, at one point, @Sammyy02k had 0 followers.

While impressive to most, Krieger knew there was more to be gained.

At 500k followers, the contracts rolled in. 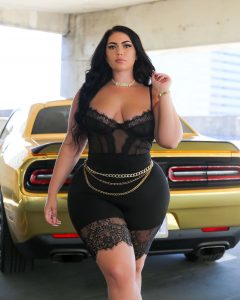 Krieger’s first contract of note was in Spring 2018, a lucrative deal with clothing brand Fashion Nova.

Now, instead of developing a brand on her own money and time, Krieger had companies competing against one another for the privilege of paying her to do what she loved.

The Fashion Nova contract was quickly followed by others, and within just a matter of months, Krieger’s lifestyle had changed dramatically.

She quit her last remaining part-time gig and moved into a luxury 2-bedroom apartment in Portland’s famed Pearl District.

With newfound status, however, came the need for significant soul searching.

Not too long after inking the Fashion Nova deal, Sammyy02k was offered to do a paid appearance at a party in downtown Portland. While there, she got a call from the police.

A gray Dodge Charger registered in her name had crashed into a median in China Town. The driver had fled, and the car was totaled.

Krieger immediately had a suspect in mind: a reckless boyfriend who had started taking advantage of her recently-acquired celebrity status.

Boyfriends weren’t the only concerns that Krieger had to deal with – even some of her own friends had started to become jealous, the relationships turning toxic.

To her friends, Krieger was still known as just “Sam”. People in her circle had difficulty comprehending the controlled entrepreneurism required to run @Sammyy02k.

They’d ask for shoutouts or suggest off-brand posts, not understanding that the Instagram profile required attention to detail and discipline.

For a young adult who now could command thousands of dollars for just a few minutes of work, it was reality.

The type of loneliness that hides in shadows of success began to stretch further and further into Krieger’s personal life. The totalled car was the last straw.

While on the phone with the police at her first paid party appearance, Krieger took a deep breath and decided that staying on her desired path would require serious changes.

“I saw this as an opportunity where I could come back, and make a statement.”

It turned out that ditching the car (and the boyfriend) would be one of her best career decisions yet.

A car is born

A few weeks after the incident, Sammyy02k returned from a luxurious all-paid overseas trip to the Seychelles with a new travel sponsor. Krieger decided that she “needed a new whip.”

By now, Krieger had registered an LLC in her name. Business was coming fast and steady, and it wasn’t uncommon for her to be recognized on the street – not only in Portland, but in Los Angeles and even cities as far away as Kansas City.

“At this point, I was really stepping into my role as an influencer. This is when I really refined my style, my brand, and my image.” 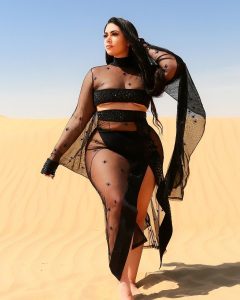 For you and me, “refining your style” might mean picking up a few shirts from a department store.

To Krieger, it meant buying a brand new custom Dodge Challenger R/T wrapped in metallic gold with scissor-doors, the kind you’ll find on a Lamborghini.

According to Krieger, the car represents the essence of her brand, and the luxury of travel. It’s now one of the most recognized facets of her style.

Sammyy02k all over the world

With sponsorship deals taking her to the Seychelles, Dubai, Abu Dhabi, and beyond, she is now recognized in 4 continents.

She prides herself on showing her fans different places around the world. The path less traveled, the freedom to be everywhere, the luxury lifestyle that many in our always-connected society dream of.

“I feel connected to the road, and traveling to exotic locations”

The opportunities that sudden stardom has afforded her seem almost surreal, even to her. Normalcy is a mirage in the rear view mirror.

In mid-2019, Krieger was the main guest on a Portland Fashion Week panel. Already an influencer to influencers, she insisted that whatever secret ingredients success exist come naturally.

During a Q&A, she fielded numerous questions regarding her chosen career path. Not all of the questions were softballs.

Some questioned the materialism and sexuality often used by influencers.

The response was simple:

“Your opinions don’t pay my bills.”

Always on the go

With more followers pouring in every day, Sammyy02k stays busy. She recounts tales of distant travels, and the types of perks that I thought were originally reserved for a few select people who orbited high above in the LA movie industry.

Thirty minutes into the interview, I notice that a distant crowd has accumulated around our table like rings around Saturn.

Krieger barely seems to notice. A reminder goes off on her phone, a notification about another engagement she has back in the city. 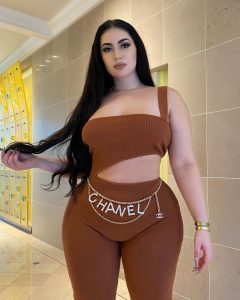 After a polite exchange of thank yous and goodbyes, she heads back to her car.

I hear the exhaust note of the Challenger float away from the parking lot as I gather my notes and get up from the table.

As I glance up, the crowd has already dispersed. The only people left pay me no mind as they stare at their phones.