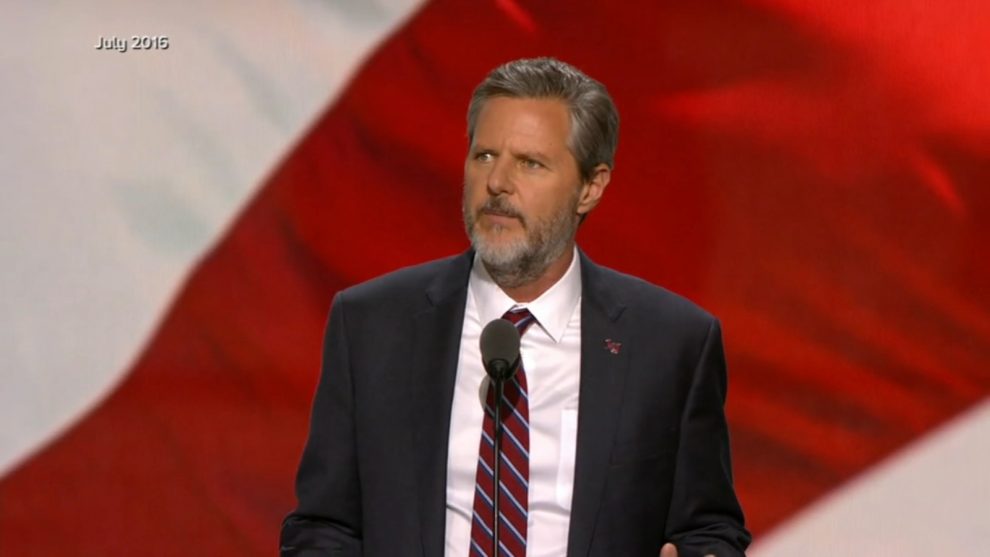 Evangelical leader and Trump backer Jerry Falwell Jr. was forced to resign as president of Liberty University after posting a photo of himself with his zipper down with a woman, not his wife, also unzipped. It later emerged that for seven years there was a sexual relationship between him, his wife, and a pool boy. Reportedly he liked to watch them have sex.

Larry Flynt: My Final Farewell to the Falwells

by Larry Flynt – Published by the Daily Beast

When I heard that Jerry Falwell Jr. had resigned the presidency of Liberty University in disgrace, it struck me as the belated ending to a long personal saga with the Falwell clan—and an essential footnote to the role of religion and free speech in America. For those unfamiliar with ancient history, it began in the 1970s, soon after I started publishing Hustler.

Jerry Falwell Sr., then head of the Moral Majority Christian interest group, sued me for libel and the “intentional infliction of emotional distress” over a Hustler parody of a Campari ad that used the liqueur’s slogan: “You’ll never forget your first time.” The parody featured an interview with Falwell waxing nostalgic about his “first time”—with his mother in a Virginia outhouse.

The legal battle lasted five years, from 1983 to 1988, including three decisions against me in federal courts. There was an important principle at stake: the right of artists, writers, and publishers to satirize public figures. Finally, I was vindicated by the Supreme Court in a unanimous decision written by conservative Chief Justice William Rehnquist. This case is often cited as a landmark ruling for the preservation of our First Amendment rights to free speech.

Ironically, Falwell Sr. and I actually became friends later. We enjoyed many cordial visits, participated in debates across the country, and even exchanged Christmas cards. I have to concede that his friendship with me proves that, for the most part, he was practicing an essential tenet of his faith, forgiveness, and was a sincere Christian.

Which is more than can be said for many of his fellow televangelists—the sorry parade of charlatans like Jim Bakker, Jimmy Swaggart, Paula White, and all the other prime-time Elmer Gantrys—including the son, Jerry Falwell Jr. They’re obsessed above all with sexual behavior, ignoring and subverting the core message of Christianity—humility and compassion for the downtrodden—while embracing “prosperity gospel,” which is to say the gospel of greed above all other values.

They support Republican politicians eager to gut Social Security, Medicare, Medicaid, welfare and other programs designed to do what Jesus Christ strived for: the reduction of human suffering in this vale of tears. They live in multimillion-dollar mansions and fly around in private jets, while fleecing their flock for “prayer donations” guaranteed to cure incurable diseases and afflictions. They forget that Jesus Christ only lost his temper and acted violently once: when driving the money-lenders from the temple. But they are not troubled in the least by the banksters on Wall Street, who hoovered up millions from middle-class Americans, granting the 1 percent a get-out-of-jail-free card to do it all over again. Instead, these evangelists reserve the whip for gays, women who want to control their own bodies, pot smokers, and other “heretics” who are only trying to lead fulfilling lives. They actually work to increase the sum of human suffering. They are peddlers of religious snake oil.

Eventually, the gross hypocrisy catches up with many of them. Such is the case with Jerry Falwell Jr., now accused of having engaged in a seven year-long cuckold relationship with his wife and a Miami hotel pool attendant. Jerry Jr. acknowledges the affair, but claims that he was “not involved.” The pool attendant, Giancarlo Granda, disputes this, stating that they invited him to a hotel room and offered him a partnership in a real estate venture—perhaps a strange offer for one cleaning swimming pools for a living. The scandal has been out there for a while, but it was given renewed attention by an Instagram photo that Jerry Jr. himself shared: of Jerry and another woman, not his wife, standing side by side with their pants unzipped. Before this, Jerry Jr. was forced to apologize for a tweet portraying one person in blackface and another in a KKK outfit.

Which brings us to Donald Trump. If there is one person who could be said to have lifted the orange buffoon over the hump in 2016, it’s arguably Jerry Falwell Jr. The evangelical base, crucial for the election of any national GOP politician, was not warming up to Trump in the primaries, for good reason. Here was a man who had violated almost every principle of the Christian faith: he was married three times; accused of multiple extramarital affairs; repeatedly defrauded investors, contractors, and students; habitually lied; and practiced thinly disguised sexism and racism.

But Jerry Jr. assured his nervous flock that Trump “lives a life of loving and helping others as Jesus taught in the great commandment.” After the Access Hollywood tape came out, with Trump bragging about grabbing women’s pussies with impunity because he’s a rich bastard, the flock started getting cold feet again. But Jerry Jr. came galloping to the rescue with these choice bits of flimflammery: “God called King David a man after God’s own heart even though he was an adulterer and a murderer. You have to choose the leader that would make the best king or president and not necessarily someone who would be a good pastor.” And this: “It’s such a distortion of the teachings of Jesus to say that what he taught us to do personally—to love our neighbors as ourselves, help the poor—can somehow be imputed on a nation. Jesus never told Caesar how to run Rome.”

Many of the flock were not convinced by these rationalizations. Dozens of graduates from Liberty University returned their diplomas in protest, accusing Falwell Jr. of having corrupted the university’s “core mission and defiled its core beliefs, substituting the worship of power and influence for the worship of God.” Another former Liberty student, Kaitlyn Schiess, summed it up best in a recent New York Times editorial: “At Liberty, our minds may have been receiving correct content, but our hearts were being trained to love wrongly: to love political power, physical security and economic prosperity as higher goods than they are… A thirst for political power—and sometimes, obtaining that power—begets more than corruption: It often involves sexual immorality, degraded moral judgment and financial malpractice.”

It’s possible Jerry Falwell Jr. will find forgiveness from his flock, but even if he doesn’t, the $10 million severance payout from Liberty University will surely ease his pain. As for the rest of the country, I repeat the sentiment that has guided me for decades: If there were ever to be a Second Coming of Jesus Christ, I have no doubt that his first order of business would be picking up a whip and banishing forever all the hucksters and false prophets who have perverted his message.