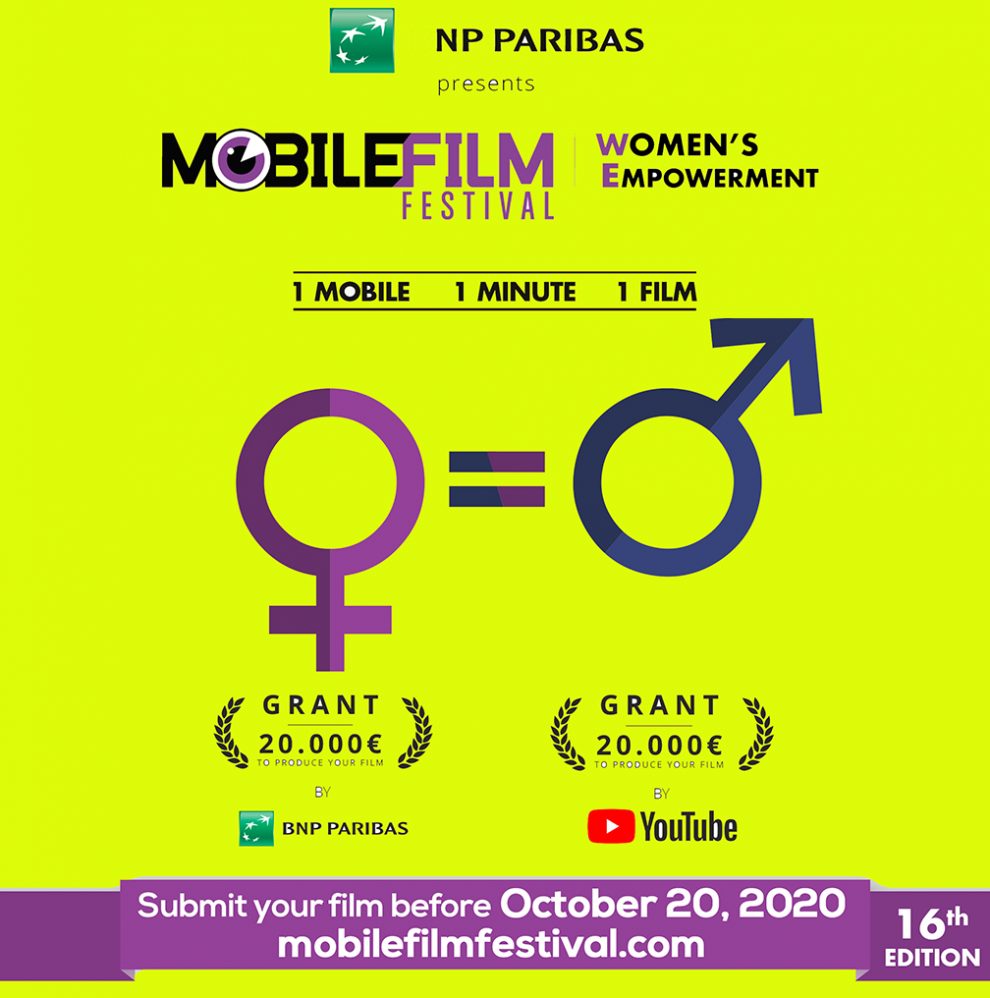 The filmmakers are invited to create films according to the unique format that has made the originality of the festival for 16 years : 1 Mobile, 1 Minute, 1 Film.

The addressed questions in those films may be specific to the filmmakers? country, to their culture or religion; these questions may concern the family, profession, or intimate universe; the films will report unacceptable situations for women that still too much present in the world today and they will also propose some concrete actions to ameliorate the situation; they may be global or local and especially they will highlight the fights of the feminist movement throughout the world for a real equality search.

For this feminist edition, a jury of cinema professionals, activists, of women and men of exception will select the winners among the fifty films in the official selection. This jury will be presided by Agnès Jaoui and is composed by Chiara Corazza, David & Stéphane Foenkinos, Anastasia Mikova, Tania de Montaigne, Marine Périn, Oxmo Puccino, Justine Ryst, Florence Sandis, Aloïse Sauvage and Anne-Dominique Toussaint.

The Mobile Film Festival?s objective is to reveal and to support the talents of tomorrow by helping them to become professionals. By giving the word to the filmmakers of all geographical and cultural horizons, the festival shows strong, committed, and plural films. The Mobile Film Festival is every year more and more international with participants originating from about a hundred of countries.

For 16 years, the Mobile Film Festival has defended the values of equality and accessibility by removing the economic constraints thanks to the use of the mobile phone as well as the free registration, while enhancing the creativity of filmmakers which must tell a story in one-minute maximum.

This year, the Mobile Film Festival will give 7 prizes, and in particular 2 grants to produce a film in an amount of 20.000 € each ($23,684) through its partners: BNP Paribas, that will support the International Grand Prize, and YouTube through its programme #EllesFontYouTube, for the French Grand Prize. These two grants of 20.000 € will permit the award winning directors to direct a short film in one year with professional resources and the help of a producer.

The Mobile Film Festival invites you to be creative, imaginative and activist through all forms that the cinema offers us of which the humour, the suspense, the science-fiction, the documentary… to promote Women’s Empowerment!

Re-created in Animal Crossing, Sylvan Esso’s alternate music video for “FERRIS WHEEL”
A Guide to Hemp Flower and Its Uses