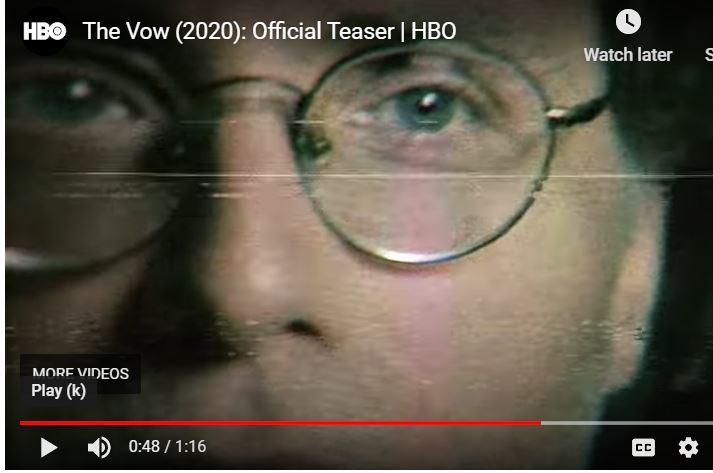 The HBO 9-part documentary, the Vow, is premiering on Sunday, August 23 at 10 pm.

The Albany Times Union obtained copies of an email sent from and to followers of Keith Alan Raniere, asking them to send emails to HBO.

Here is the email sent to followers of Raniere:

“From the trailer for the soon to be released HBO documentary, The Vow, it is obvious HBO has obtained a large amount of footage that was taken at ESP/NXIVM events. If you do not want to be in this documentary, you can send the email below (or a version of it) and a picture to outreach@thevowseries.com.”

“Dear HBO, I understand that the trailer for the HBO series, The Vow, featured several NXIVM events that I may have attended. I also understand that footage from other NXIVM events may be included in the upcoming series, which premiers on Aug. 23rd. I hereby request that my name, likeness, and/or voice are not included in the HBO series, The Vow, or any other HBO production or promotion.

“I did not and do not issue consent for my likeness to be used for commercial purposes, and therefore, I do not consent for HBO to use footage of me for any reason without my prior written permission. I have attached my picture. Please reference it against the footage in The Vow to ensure my likeness does not appear in the series, or otherwise.  Thanks, Your name.”

The documentary was directed by Emmy Award winners Jehane Noujaim and Karim Amer, who have been nominated for Academy awards. They attended Raniere’s trial and spent more than three years making the series, having begun prior to Raniere’s arrest on March 26, 2018.

It is not known how many followers of Raniere sent emails to HBO or what, if any, impact this will have on the show.

With the show about to air in less than a week, my guess is that lawyers for HBO have cleared every second of the footage and Raniere’s followers will not prevail [much like they never seem to prevail at anything, anyway.]

In a previous post we revealed there are still dozens of Raniere followers and I think it likely that Raniere is directing his stooges to email HBO.  [See Who’s Still in Part 4:]

The Vow’s nine episodes will air between August and October:

I have not seen any of the footage, other than the teaser, but I suspect this documentary will be significant and well received.  I suspect a lot of Nxivm members will appear in the series, including Raniere, Nancy Salzman, Lauren Salzman, Clare Webb Bronfman, Sara Rosner Bronfman, Allison Mack, Nicki Clyne, Emiliano Salinas and other Nxivm members.