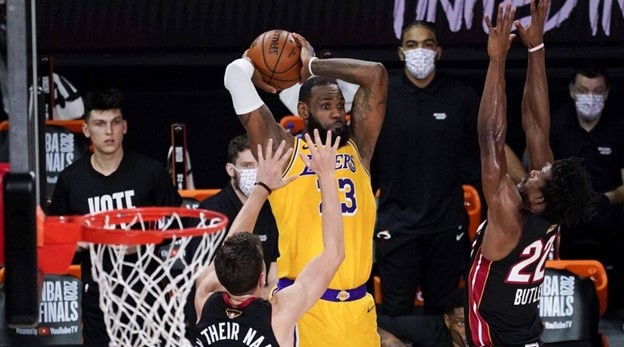 The NBA Finals are underway and LeBron just shrugged at the fact he’d be participating in another run at the NBA title.

The Miami Heat were missing Goran Dragic and Bam Adebayo and they still managed to a nearly 30-point swing in their Game 3 win compared to their Game 2 loss. Jimmy Butler had an incredible showing, putting up a triple-double that included a scoring explosion of 40 points.

We’ll we see another double-digit win by one of these teams in Game 5, or will it be a close one? Let’s take a look at Bovada, it has the Heat as +7 -110  point underdogs, nothing to be surprised about it, with the recent victories of the Lakers, the chances for the Hears seems to be slim for but the war is not over yet.

Oddshark’s simulations have the Los Angeles Lakers winning by a score of 113.7 to 111.1. Sportsline projects the game to play out around 112 to 106, also in favor of the LA Lakers. Team Rankings has the Lakers with an 80.8 percent chance to win the Finals. Their stats-based algorithms predict the Lakers will cover in Game 5, but it’s just a one-star lean. So, confidence is not too high.

It’s funny that Oddshark’s projection is almost exactly the same as the adjusted offensive totals for each team. At this point, the Lakers are averaging 113.56 per game and the Heat are averaging 111.97 per game. I almost feel like Oddsharks predictive models just phone it in, and with that said, I wouldn’t trust their predictions with my money. However, It’s good to see data, and free data is even better!

Defensively, These teams are pretty close. The Lakers average just 107.51 points allowed and the Heat 108.97. So, if we’re looking at pure averages, this game has a backdoor cover for the Miami Heat written all over it. That said, it simply doesn’t work like that. On most nights, the Lakers are a matchup nightmare for the Heat. This fact is proven by looking at the last ten meetings between the two teams. The Lakers own an 8-2 advantage in their series and are 6-1 in their 7 against the Heat. That said, the Lakers have not covered the spread well against the Eastern Conference or South East Division teams. In both scenarios, LA is just 1-5 over their last 6 AST. 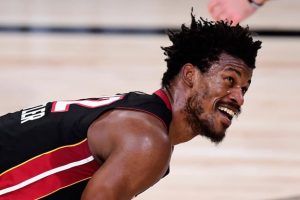 The big difference in Game 3 was the Miami Heat’s first-half performance. In Games 1 and 2, they were down by double digits going into the second half. In Game 3, they led by 4 points, 58 to 54.

On Game 4 the trend continues with the dominance of the Lakers, they won 102 over 96 over the Heats, It was just not possible for Anthony Davis to punch his chest out joy by getting more closer to another title in 10 years.

I expect the Lakers to play hard in the second to try and enter the locker room at half time with the lead —especially if they are outscored in the first quarter. The Lakers have had a tough time ATS against teams out of the East, so my official NBA Finals Game 5 Pick: Take the LA Lakers -1.5 in the second quarter at Bookmaker.

At Bookmaker, the Lakers are significant favorites to win the NBA Title, at -1000 to the Miami Heat’s +701. Considering, the Lakers are going into Game 4 up 2-1, it makes sense that they are getting a lot of chalk. At -1000, there is no value in betting on them to win. Perhaps, you could take a punt at an exact series play, like the Los Angeles Lakers to win 4 games to 2. There are usually plus-money prices for these types of plays.

Profiting in the Industry of Bitcoin Trading
NEW MUSIC: Jeremy Ivey’s new song “HANDS DOWN IN YOUR POCKETS” addresses insane flood of news