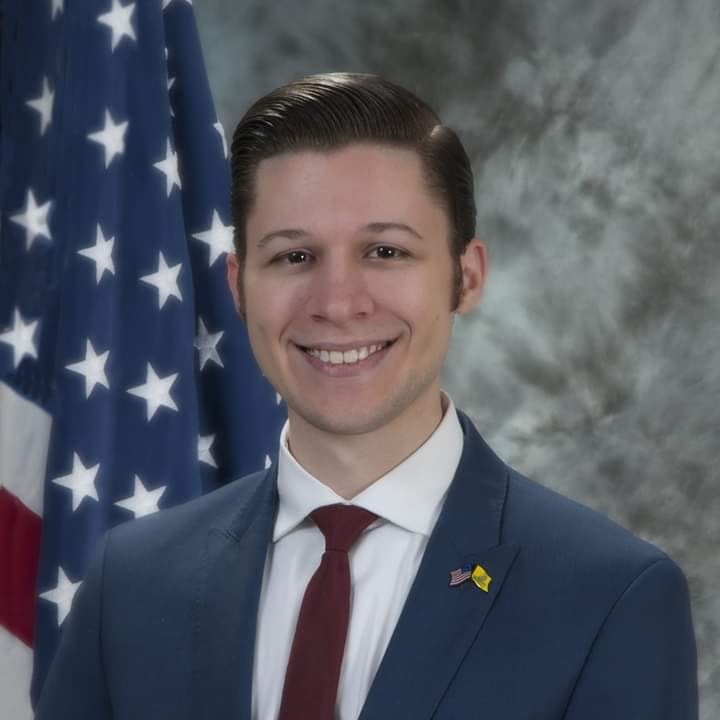 “Let us not seek the Republican answer or the Democratic answer, but the right answer.  Let us not seek to fix the blame for the past. Let us accept our own responsibility for the future.” -John F. Kennedy

Frank Smierciak is not only young, bright and articulate, he is also driven and committed to make positive change in the world.

When asked what brought him to the race for public office, without pause he responded by saying that he saw a congressman doing things which were not entirely above board  He knew he had to change that so decided to run for that congressman’s seat.  He and his father collected 1300 signatures themselves to qualify for the race.  He did not win that race, but it did not deter him in his quest to be the lever to move things in the right direction.

He set his sites on a seat in the NYS Assembly in the 143rd district which encompasses Lancaster, Cheektowaga and Sloan.

Incumbent, Monica Wallace has been at the helm of bad choices and has been steering the boat of her district right into the rocks.

“The safety of your family and our communities is of utmost importance.”

The Bail Elimination Act of 2019 puts the police, your family, your home and YOU at risk.

Originally, the intention of the bill was to reduce the number of people jailed while they waited for trial because they couldn’t afford to pay bail, however what emerged was a cheap substitute for justice which puts everyone in NYS at risk.

As a co-sponsor of this bill, Monica Wallace with a smiling face proudly proclaimed that she ‘supports the police’ while at the same time pushing a bill which effectively decimated the justice system and gutted the front line security that we have with the police.

The bill, speciously referred to as bail ‘reform’ by its proponents is a travesty which in fact makes a mockery of the concept of ‘reform’.

This type of duplicitous behavior must be purged from Albany and replaced with real human beings who have the purpose of serving the people they represent rather than trying to gain recognition with the party they are involved with.

This puts the victim in the horrific position of having to defend himself after being victimized!

Imagine your home being broken into and your valuables stolen.  The police apprehend the suspect and because of this law, he will go to court, be let out on his ‘promise’ to show up in court. To make matters worse, the perpetrator has the right to come back to YOUR HOME to collect ‘evidence’ to defend himself.

This is a mockery of the justice system and a blatant attempt to destroy law and order.

After enormous backlash from judges, law enforcement and society, the bill was amended in April with the changes taking place on July 1.  Now, judges can impose cash bail in some circumstances.

“The surest way to raise revenue for government is to cut taxes and deregulate business because it allows businesses to flourish and more jobs to be obtained.”

A huge part of Smierciak’s platform is the cutting of taxes.  Following John F. Kennedy’s lead, he feels that creating more jobs is the best way to raise revenue – not raising taxes.

Gov. Cuomo has presided over the largest exodus from NYS in the history of this country.  His model is to continue to raise taxes.  It is not working.  OBVIOUSLY.

The debt in NYS has risen astronomically under his rule from a whopping 6 billion to a staggering double-digit deficit somewhere in the realm of 56 billion and it does not look like it is going to stop any time soon.  This is the result of bad economic policy of raising taxes to solve everything.

NYS is one of the highest taxed states in the nation and people are leaving in droves. California and NY are neck and neck for first place in failed policy, loss of population, indebtedness and taxes.

Smierciak says if you lift the burden on the businesses and the people, everyone will win.

“We must fund the police. I support them. They are the front line between us and chaos.”

Including an A plus rating from the NRA, he has earned the endorsements of the NYS Fraternal Order of Police, Unshackle Upstate, WNY Association of Retired Law Enforcement, as well as the Good Government Club of WNY.  Frank Smierciak is not afraid to stand up in support of Law Enforcement.

We must Defend them, not Defund them.

As if Bail Reform were not enough to change your mind about Wallace, she also voted to defund the police. This further emasculates the duties of a police officer and contributes to the rise in crime.

If you have noticed a change in your feeling of security of late, look no further than brown nosing politicians like Monica Wallace.

Did you know that Wallace accepted the endorsement of the Working Family Party who supports the defunding of the police? The WFP is a far left organization that, according to an article in the Atlantic by Molly Ball in 2016 they plotted to ‘take over America’ by ‘targeting a class of Democratic elected officials who, in the view of many liberals, seem to listen more to their moneyed donors than to the left-wing rank and file’.

Monica accepted this endorsement on one hand and then smiled for the cameras while she proudly stated that she defends the police.

This is a blatant contradiction in facts which signifies a lie.

“I want my children to grow up in a world fueled by the American Dream.”

Another part of Frank’s platform is to help existing businesses during the recovery period of this pandemic of failed leadership in NYS.

He says, “Let’s get the businesses opened! It’s hard to survive without customers.”

His plan is simple: Make it easier to do business.  Cut taxes and regulations, put more money in people’s pockets.

“I want my children have a chance at a better life and I want to have the opportunity to give it to them. I want them to know the VALUE of this country.”

America is the greatest country on earth.  If America goes by the wayside, so goes the world.

Smiercziak wants to help to save this great republic and part of doing is that to protect the future generations.

That is why he is pro-life.

He does not believe in the heinous bill that allows for babies to aborted right up to the time they are born.

Monica Wallace believes that it is ok to kill your baby right up to birth…but she will not admit it. She voted for it.

The law which was celebrated with a party after it passed in the NYS legislature last year, decriminalizes abortions after 24 weeks, therefore it is legal right up to birth.

Monica lied and said that was not true and in fact, she called Frank a liar.  Wallace either did not read the bill that she voted for or is trying to mitigate the fact that that is murder of the defenseless.

Either way, it is not becoming of someone who is supposedly working for the people.

Monica has been promoting herself with commercials on family values.  How can someone who condones abortions up to birth, and egregious laws which make communities unsafe, lecture anyone on ‘family values’?

“Families matter.  Safety matters.  The safety of your community matters.  Pick an issue and I will be on the right side of it.”