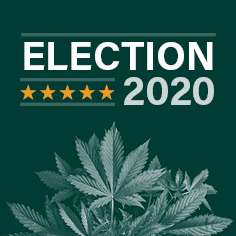 While the pandemic and economy are at the forefront of the presidential election, on a state level, cannabis consumption is on the minds of perspective voters. That means several more states might be added to the long list of places where medical marijuana is fully legal. Here’s a quick look at some of the most active locations in the U.S. when it comes to both medical and recreational marijuana laws.

In 2016, the recreational-use ballot measure was narrowly defeated. Arizona has already legalized MMJ. In the past four years, advocates have been working hard to gather enough signatures to put an adult-use question on the November, 2020 ballot. They succeeded. For now, it’s anyone’s guess about the likelihood of passage. If the measure does go through, the Grand Canyon State will join 11 other states where adults can legally buy and use marijuana without a prescription.

New York is already a medical-use state, which means applicants face a very easy process to become official MMJ patients. For example, getting a medical marijuana card in Utica entails a few minutes of online interaction with a certified physician. After a short evaluation, our customers can speak with a service specialist if they have any questions. The entire process is quick and hassle-free. Best of all, you can join patients who are already in the state’s MMJ program. So, if you want to feel better, apply from Utica or anywhere in the state.

Montana is in the same category as Arizona, but for different reasons. Advocates have been trying for years to get an adult-use measure in front of voters but have been unsuccessful until now. The 2020 election will be the first time the state’s residents have had the opportunity to say yes or no to fully legal usage. A co-measure includes details about who can buy, whether in-public consumption will be allowed, and how the substance will be taxed. Montana is one of the many states that has a mixed cannabis situation, meaning that medical use is okay but recreational use is not.

Like Montana and Arizona, New Jersey is a mixed state. Medicinal use is fully legal but recreational use is not. In November, 2020, voters will decide whether NJ joins the growing list of adult-use jurisdictions. Of note is the fact that advocates have been careful to change official legislative wording on ballots. No longer do they use the term recreational use, instead opting for the more neutral-sounding adult-use. Some voters recoil at the idea of people using the substance as a form of recreation, but are alright with allowing use.

South Dakota has the harshest drug laws in the U.S. Residents of the state can be forced to take drug tests and jailed for up to a year is their blood contains illegal substances. This draconian penalty applies even if the citizen legally consumed marijuana in a state where the activity is fully legal. Cannabis advocates have made extra efforts to legalize both medial and recreational use in South Dakota, and both measures will appear on the November ballot at the same time, a national first.

What is Binge Drinking?
Changes in the Financial Sector During Covid-19
Comment