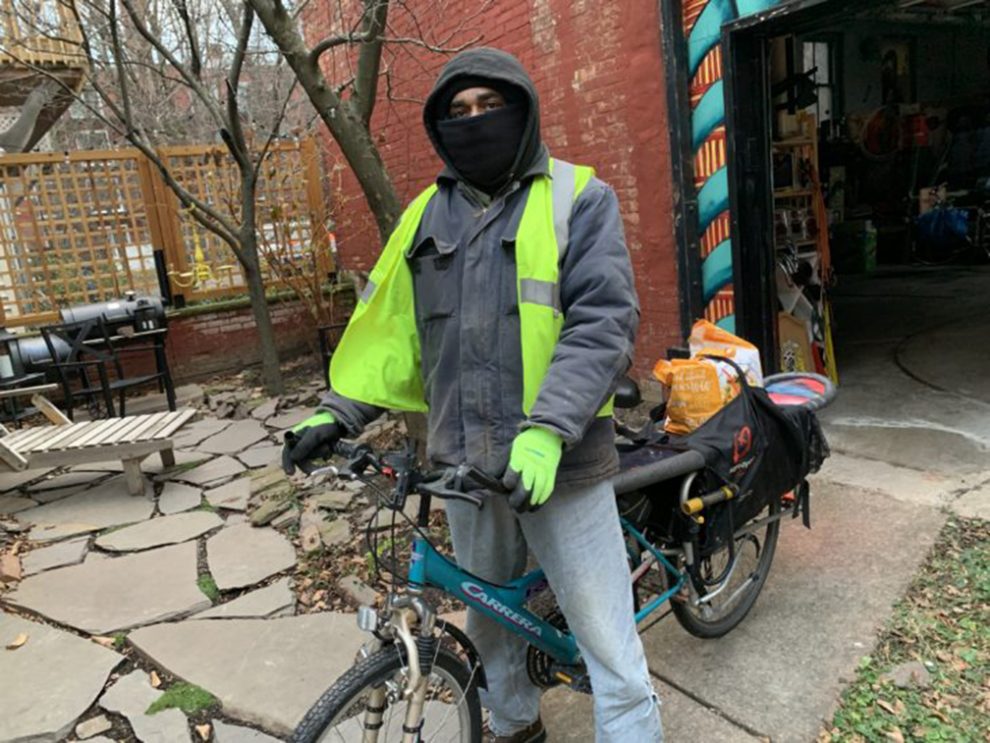 Chances are that you don’t know what it’s like to be homeless. I’m not talking about being down on your luck, I’m talking about having no reliable roof over your head.

The other day I was speaking with Eddie Ice Cream Jones (lead image), a bike advocate in Buffalo, who told me that if I ever came across any small grills along the side of the road, to let him know. I asked why, and he told me that he collects them for the homeless so that they can cook their food and warm their hands during the wintertime. I asked Eddie how he ever came up with the idea, and he said, “Years ago, I found that I had no food in the house. I’m talking, not a thing. I had a month’s worth of food for the dog, but nothing for me. So I went to the food pantry and they gave me a meal. Then they gave me some food to take home. I thought about how lucky I was to have a home, and a stove, so that I could heat up the food – chicken, canned vegetables, etc. Then I thought about my friend Jason who was homeless. The next time I saw a small grill on the side of the road, I put it on the back of my bike and when I saw him I gave it to him, along with some charcoal. It’s amazing what a difference it can be to have something that means the difference between a cold bite to eat on a winter’s day, and a warm meal. After that, I decided that I would continue to do the same thing for other homeless people – I’ve been doing it for six years now.”

Along with giving them the grills, Eddie tells the recipients about the importance of safety – to not use the grills inside temporary shelters, such as tents and boxes, for fear of fires, or smoke inhalation. “But they pretty much know to keep the grills outside,” Eddie reassured me. “They pack them up when they go from place to place. A small grill doesn’t mean much to most people, but to people living out on the street, it’s a big deal. And items like this typically get tossed curbside, which is when I grab them.”

It would be great to see this effort steamroll into a more cohesive program, but for now it’s really just Eddie who is making it happen. “I want to talk to Friends of the Night People about being a drop-off center for the grills,” Eddie told me. “Right now, people can drop off their small grills to the Little Africa Cultural Club – 356 South Elmwood. St John’s Baptist Church also distributes them. Toss a bag of charcoal inside if you can. The most important thing is, don’t throw them out in the trash if there is more life left in them. People want to feed the homeless, and clothe them, but Buffalo winters are cold, and a small grill can really make a big difference to someone who could use it during the wintertime.”