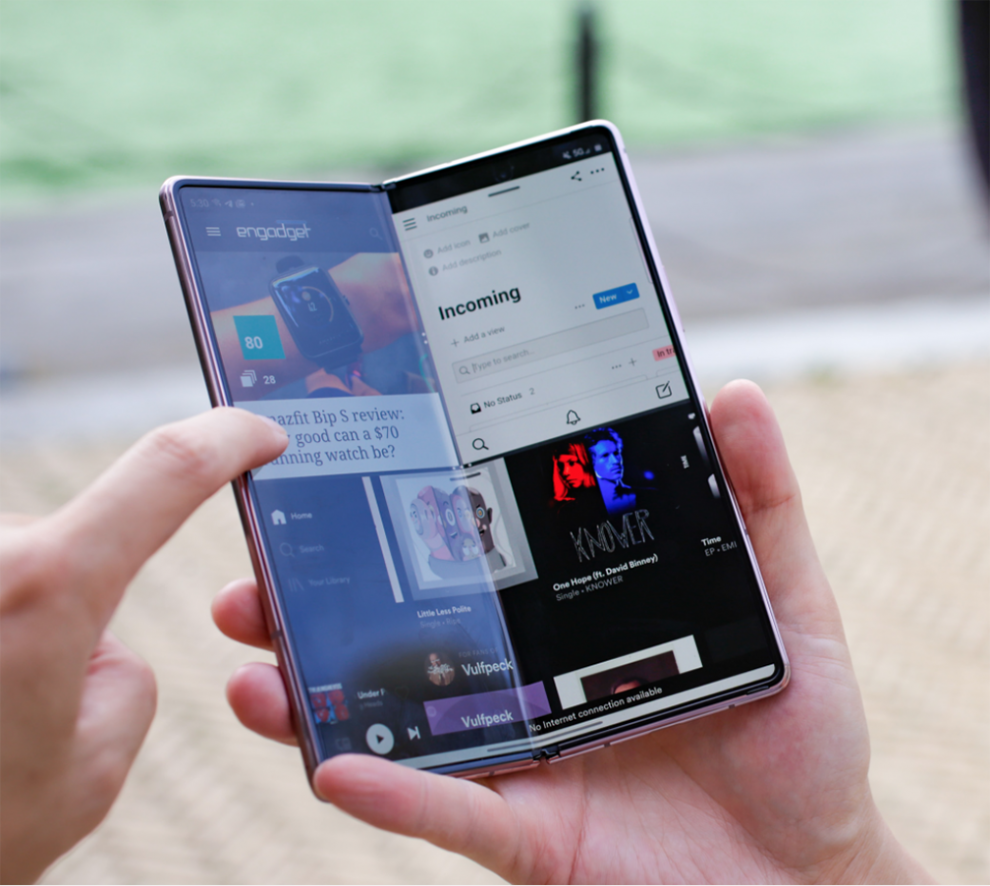 Foldable phones were the big thing a few years back. It seemed like at the time that every big phone brand was going to come out with at least some type of foldable phone.

There would be massive advancements like phones that can be rolled up into the size of a pen or something. Of course, as you may or may not know it wasn’t exactly the progressive jackpot it was originally made out to be.

The Samsung Fold, which was the biggest foldable phone coming out at the time, was hyped up way too much and was incredibly lackluster at launch. The phone was absolutely filled with flaws and crappy design features. The screen was one of the most easily scratch-able screens that phone reviewers had ever seen. Even someone’s fingernail could scratch the screen. This honestly isn’t that surprising. The screen was made of completely different materials from most normal screens because of the fact that it needed to fold and those materials were much lighter and softer than the glass your screen is usually made of. But an easily scratchable screen wasn’t all of the Samsung Fold’s problems.

The Samsung Fold was priced at just shy of two thousand United States dollars when it was first released. 2000 dollars. That is even more than what was called the more overpriced phone at the time which was the iPhone X at only a measly one thousand dollars.

On top of being one of the most expensive phones released at the time and it was also extremely fragile and completely not water proof. Because of the bulging hinge going down the center of the phone, there was no way at the time it could’ve been sealed. The phone can’t touch really any water and any dust or particles that get into it could destroy the hinge mechanisms easily. Overall the phone just wasn’t good. The folding screen was more of a nuisance and an impedance than anything close to useful. And the entire phone practically needed to be baby sat all day to stop it from being completely destroyed within a few days.

Other than the Samsung Fold the other big folding phones that were announced at the time were the Huawei Mate X, a folding phone released by Samsung’s competitor Huawei.

Unlike the Samsung Fold, which folded closed like a book, encasing it’s folding screens inside, the Huawei Mate X folds outwards. The phone has three different screens and they fold towards the back of the phone, like a book with the paper on the outside.

The phone also doesn’t just fold once like the Samsung Fold, but three whole times. This meant that you folded the phone out once for a slightly larger screen and then again for a full tablet-sized screen. The whole phone was still designed to be used with one hand, even in full tablet mode, so it has quite a few design features around that.

One of those being the ergonomic handlebar thing on the back of the phone when it’s completely folded out into tablet mode so that it’s comfortable to hold in one hand. How you’re supposed to reach across an entire tablet screen easily with one hand I don’t know but whatever.

The phone also had quite a few flaws like the Samsung Fold, with the biggest being there wasn’t much use for a folding out screen. The hardware was advancing but there wasn’t much on the software side to make the advancement useful. Along with the fact that it also cost an arm and a leg at once again a whole two thousand United States dollars, there’s no wonder it wasn’t a mainstream success.

Obviously, most of the news surrounding foldable phones has kind of been overshadowed nowadays with more pressing stuff in the news. You know, with the global pandemic and everything.

Have new foldable phones been coming out?

Almost every big phone company except Apple at this point is releasing some form of a foldable phone. Some of them are definitely better than others, there’s no arguing against that, but most of the new phones are still bringing something unique and experimental to the table.

That’s probably one of the biggest takeaways from all these new phones is just how experimental they are. This is new ground for the phone industry with something completely different than what we have currently.

The phone companies simply don’t know what will work and what won’t. A lot of the new phones they’re putting out are tests and attempts at different things and designs. It’s obvious that each phone has probably gone through hundreds of iterations in development and they probably have entire teams dedicated to figuring out what would be the most practical use of a folding screen.

That’s also one of the biggest challenges to overcome when designing one of these phones. How practical is a folding screen? Is it really nicer to have to fold open your phone for a little extra screen space? Obviously, the phone is going to have to be much bulkier to encompass the new screens that folding phones add.

That problem is easily solvable as technology advances but the question is whether the practicality of fold-able phones is also going to be able to be solved too. But hey, I’m just ranting now.

Lots of new foldable phones have been coming out and some of them do seem to be getting close to the realm of practicality but whether or not you think the gimmick of a folding phone is worth the very high price point of some of these phones is something you’re going to have to decide for yourself.

These phones might remain very expensive tech examples for at least a bit longer.

After the mediocre reviews of the previous Samsung Fold, they went back to the drawing board and came up with a large variety of innovations to fix the problems the old version had with the new one.

In fact, the Galaxy Z Fold 2 has almost none of the design flaws that plagued the first model. The hinge mechanism has obviously been almost completely redesigned to be more durable and reliable.

The screen size on the front unfolded side of the phone is even larger than the last model and is almost a full-sized phone by itself. It clocks in at 6.2 inches long with a resolution of a beautiful 2260 by 816 pixels. This would certainly be a passable phone so far especially with the Snapdragon 865 Plus Chip, 12 whole gigabytes of RAM, and 256 gigabytes of storage.

And I haven’t even gotten to the folding part. The phone unfolds to a screen twice the size in width, about five inches across.

The hinge mechanism is much better in probably every way since the previous Samsung Fold which makes opening this new phone a beauty. It automatically transfers whatever you had on the outside screen to the inside so there’s no need to reopen apps when you fold the phone open.

On top of being able to continue whatever you were already doing on the other side of the phone screen, the Samsung Galaxy Z Fold 2 also comes with brand new multi tasking features. It has great features like the screen being able to be split into zones, where three different apps can be open and used simultaneously, along with a whole of other quality of life features made to make using the folding features an enjoyable experience.

The downsides of the phone easily start with the price, once again hitting that two thousand dollar mark. This is still very expensive, at least in my opinion, for any cellular device. This is mildly understandable, considering. The phone has practically three screens built in along with the newest generation of hardware inside of it. It’s no surprise that all come with a very hefty price tag.

The phone is also quite hefty, especially when compared to the other flagship phones coming out. It weighs a whole ten ounces. Personally, I think that’s a perfectly fine weight for a phone, especially one that’s also a tablet at the same time, but there are people who go crazy over weight and bulk so I’ll let you decide what an acceptable weight is.

All in all, with even the flaws in mind this is easily the highest quality fold able phone on the market currently. If you don’t care about price and just want the best folding phone then this is the one you should buy.

Taking some tips from the phones that were popular almost two decades ago the Samsung Galaxy Z Flip when folded is half the size of a normal phone, instead of a normal sized phone that folds into a tablet, it folds upwards. Flipping out into a normal-sized phone.

While the phone is in the closed position there is a much smaller screen on the front of the phone that you can use. It’s not very big at all, only about an inch big with a measly resolution of 300 by 112 pixels. This screen can be used for a few things though, it’s a good solution for checking notifications while the phone is closed.

The small screen can also be used for the camera while the phone is closed. Obviously, the resolution of the camera is much higher than what this screen can produce but when you quickly want to take a picture without having to open the entire phone I’m sure the screen is a great solution.

The main phone screen itself is quite large, coming to a really nice 6.7 inches. This isn’t quite the largest phone screen on the market but it certainly is a nice sized one. The phone also features the same multitasking features that came out with the Samsung Galaxy Z Fold, even though I imagine they’re a bit less useful considering it’s just a normal phone sized screen. But that doesn’t mean they aren’t nice to have!

The phone obviously has some flaws. The biggest being the phone’s quite bad battery life. The phone only has a 3,300-mAh battery, which is still a nice size. Especially for a folding phone with visibly, not a lot of room to spare.

The Samsung Galaxy Z Flip will only last a few hours on a single charge, but there are certainly quite a few things inside the phone that could be eating up that charge.

You have full 5G internet data along with 8 whole gigabytes of RAM, 256 gigabytes of storage space, and a Snapdragon 865 Plus chip inside of it this isn’t in any way a weak phone.

With a slightly cheaper price, as in six hundred dollars cheaper, than the previous phone at only 1400 US dollars, the Samsung Galaxy Z Flip is certainly one of, if not the, best phone on the market if you want a flip phone in 2021.

Steps to Take to Deal with Abusive Phone Calls
Reading Ahead: COVID-19 Will Continue to Impact Book Sales in 2021