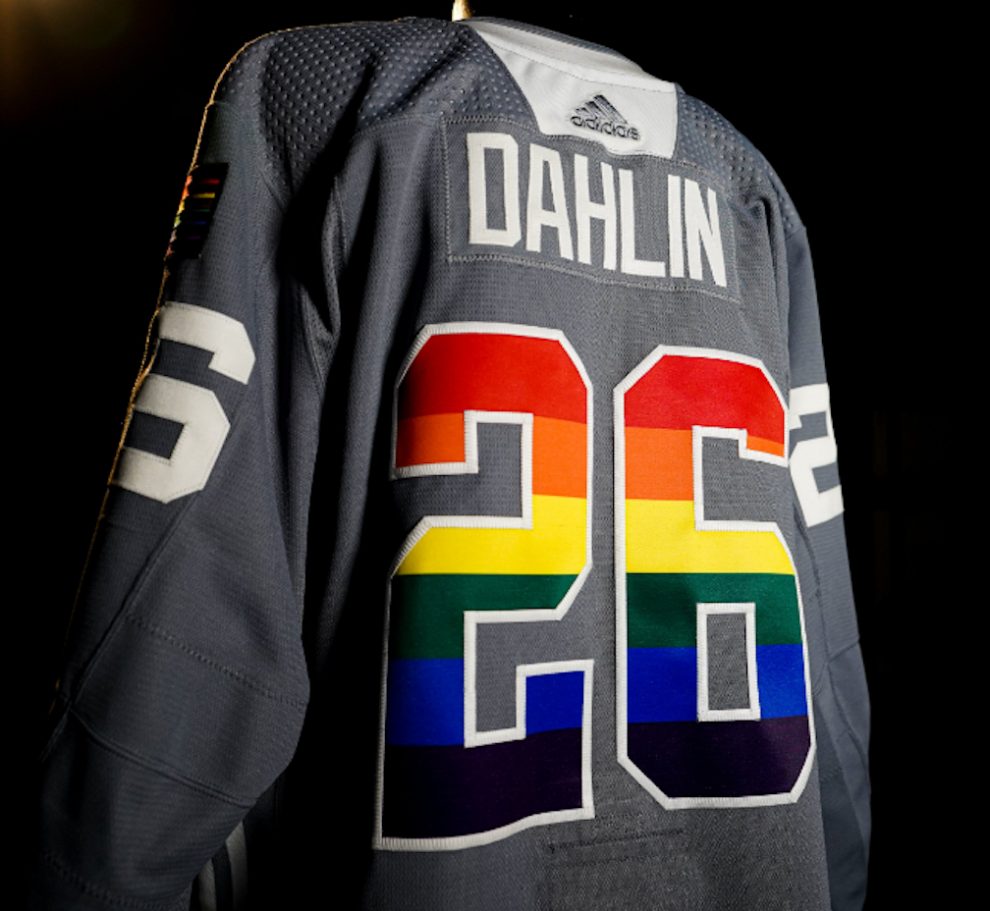 From the standpoint of Pride events staged as part of a professional sporting event, this one was hardly unique.

Scoreboards and ribbon boards festooned in rainbow colors, local LGBTQ organizations being recognized and honored as part of the event, the anthem (or in our case anthems) being sung by gay-identified artists, and the game ops crew going full thumpa thumpa house mix music bumps, recreating the feel of a full-on, full energy gay dance nightclub.

And so it was, this past weekend, as the Buffalo Sabres and Pittsburgh Penguins presented what was a sports first – the first-ever “joint” Pride event sponsored by both teams taking part in a professional sports contest. The promotion received significant coverage on NBC, which broadcast the game nationally.

Sabres interim head coach Don Granato stumbled around the word “gay” when asked on Friday how significant such an event would be and the significance of the promotion. “I think that’s part of hockey. I’m excited for it it’s an NBC game. We get excited just for NBC games. Coaches have been talking about what suit to wear since it’s an NBC game,” said Granato, never once acknowledging the very community that the event was intended to support.

Judging from Granato’s awkwardness, it could be implied that rainbow colored neckties weren’t in the plans for his assistant coaches. As he meandered trying to answer the question, the “ick” factor was evident and palpable.

Nonetheless, it is the National Hockey League that took first steps to address the issue of homophobia in sports. The You Can Play Project, a social awareness campaign was co-launched in 2012 by Patrick Burke, now a scout for the Philadelphia Flyers and son of Penguins president Brian Burke. The Burke family tragically lost their brother and son Brendan Burke, an openly gay athlete, who died in a car accident that year. The elder Burke has been a staunch advocate for LGBTQ inclusion in professional sports since then.

At the game, a promotional video showcasing the joint Pride celebration was headlined by a message from Burke, amongst several players from both teams offering words of support and affirmation for the community.

Following the presentation of the anthems by members of the Buffalo Gay Men’s Chorus, with the backdrop of the Peace Bridge between the USA and Canada, it was time for puck drop, and what better a song bump to open a game than Lady Gaga’s “Born This Way”.

Setting aside Granato’s discomfort even blurting out the word “gay” to a question, there is a gamut of opinions within the athlete community about the inclusion of gay players on teams and in the locker room, and that conversation continues to this day.

Within the Sabres organization, former player Jason Pominville was one of the loudest voices in the room offering his support for the LGBTQ community, taking on the role of team spokesman for the You Can Play Project and participating in local Pride events.

Sabres goaltender Linus Ullmark took it one step further, painting a rainbow flag on the back of his goalie mask and displaying it for almost a full season. Ullmark has been famous for his goalie mask art, even painting his favorite Minions characters at one point. When asked about the significance of wearing an LGBTQ symbol, Ullmark was unapologetic and reinforced his support of gay fans and fellow athletes.

Ullmark hails from Sweden. Many of today’s NHL players come from countries where being gay is no big deal. Even today Canadian players still dominate the league. Canada’s Charter of Rights affirmed marriage equality way back in 2005, eleven years before the United States did likewise in the bitterly divided 2016 Oberkfell v Hodges decision before the Supreme Court.

Dance mix music blaring through the arena during every media TV timeout. Is it enough?

Roughly 4000 athletes are under contract with 123 teams in the four major North American sports – the NHL, NBA, NFL and Major League Baseball. Not one. Not even one, openly identifies himself as being gay.

Not one gay player? Really? It is an anomaly that is statistically impossible. That among the ranks of all these players, not even one would be comfortable enough within his skin to share his personal life on a large stage and do so openly, without scorn, without judgment, without disruption to his teammates and the organization to which uniform he wears.

In the past decade, two prominent cases of gay athletes “coming out” became major news stories. Neither ended well.

In 2013, NBA player Jason Collins came out in a story released by Sports Illustrated. The announcement was groundbreaking at the time, and as he headed into free agency that off-season, no team came calling.

He ended up signing a 10-day contract with the Brooklyn Nets in February of 2014, and on February 23 of that year, stepped onto the court thus becoming the first gay player in major sports history to play in a four-sport event.

Six months later, with no team willing to sign him, he retired from the sport after 13 seasons.

The story of Michael Sam is that much sadder.

Sam was a standout defensive end for the University of Missouri Tigers and was projected as a third round pick in the 2014 NFL Draft. At the conclusion of his time in college, he came out to his teammates and his university community. The support for his decision was tremendous.

The NFL, anxious to promote itself as a league of inclusiveness and diversity, put Sam and his partner front and center in their elaborately staged draft show. And then Sam, and the rest of us waited. And waited. And waited for his name to be called.

Sam was eventually picked by the St. Louis Rams. He was the 249th of 256 players selected in the draft that year. He appeared in three preseason games, was cut by the Rams on final cut down day, then ended up on the practice squad of the Dallas Cowboys.

By 2015, Sam was playing the Canadian Football League, for the Montreal Alouettes. debuting in August that year but appearing in just that one game. He left for home, claiming a sore back, but later admitted that the strain of all the attention focused on him as a gay player was taking a toll on his mental health. He retired from the game at the end of the season.

So forty-plus hockey players this past Saturday. Doing their pregame warmups in specially designed rainbow jerseys, set to be auctioned later with proceeds supporting LGBTQ charities. Is it enough?

It is 2021. Marriage equality is the law of the land. Same sex couples are raising children and running their families. Serving in top roles in government (hello Secretary Pete), business, commerce, education, health care and the arts. Gay and lesbian athletes craft their skills across the gamut of many sports at many levels, whether professional or in school.

Yet take one look at the social media comments when a team like the Sabres or the Penguins announce a Pride event.

Littered amongst the many messages of support are cruel and hateful comments, which would make the MAGA crowd proud.  Read through them and imagine the same vitriol if these platforms existed when Jackie Robinson took to the MLB field back in 1947. You get the picture.

Joint Pride. Is it enough?

The entire game and presentation this past Saturday, with its message of affirmation and inclusion, was greatly appreciated. With the Covid restrictions and the hoops one has to go through just to enter the arena, it was a shame more fans couldn’t be there to take part.

But until the day comes when a player, and not just any player hanging on by the skin of his teeth, but an every day player with solid credentials and performance skills, can be comfortable being out, not having to hide his life, and it NOT be a story. That is a day when it will be enough.

Chances are, when that day comes, it will start in the NHL. If Granato is still around with the Sabres, hope he can blurt out the word. “Gay”. There may even be a gay or lesbian sports reporter or two in the scrum, happy to share that story.