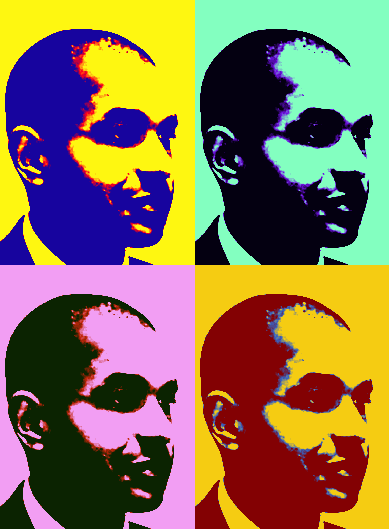 Echoes of ‘New York, New York’ resound in my mind, while shadows of a man in a fedora dance on the wall. Echoes and shadows are what most of us are left with in Gotham. Gone are so many shops, so many parties; happy days have disappeared as a virus, the lowest of life forms, takes for its prey Homo sapiens. Eating them alive and turning entire cities into ghost towns, it mutates as we develop vaccines. The little worm bites deep into the Big Apple. It has made its way to the core.

Businesses, especially those that involve social interaction – eateries, clubs, spas and cinemas – all sit boarded up.

Traders continue to work downtown, plying their trade for clients who may have never been to this metropolis, and other industries have found ways to work by means of the world wide net, but the internet is no safety net; the government provides scant relief with stimulus subsidies, sometimes delayed by politicians. Nothing can replace a real job.

In the midst of this surreal reality New York is in the throes of an election, or rather, elections, with 51 council seats to be decided, along with five boro presidents, a mayor, a public advocate, and a comptroller.

This last seat is key. Whoever presides over the public purse is perhaps the most important person in town.

That individual will be handling a budget of hundreds of billions, with city pension funds, city payroll, investment decisions, and 850 employees to oversee.

Having lived in this city since 1963, and having been politically active since 1970, when, as a third grader, I wrote a letter to then Mayor John Lindsey, I take some interest in this. I live here now and intend to be here for some time.

But I might not get to stay if things don’t improve. Crime is staggering – people get slashed in the face, punched in the face, kicked in the face, pushed onto subway tracks, mugged, beaten at random – it is becoming a mine field. Last week a young man sat charging his phone at the Port Authority with an AK-47, an ammo clip with live rounds, and a gas mask. Cops spotted it and prevented something bad from happening.

Many have tossed their hats in the ring for comptroller – with no less than 40 hopefuls for the Gracie Mansion seat; from Fernando Mateo, former TLC commissioner, and national bodega association head, to Paperboy Prince, yes, that is his name on the ballot – they are vying for your vote.

Fewer vie for the comptroller position. Among the smaller handful, there is one promising candidate – Daby Benjamine Carreras. He is certainly qualified, he presently handles many millions of dollars at a top firm on Wall Street, with, of course, a Series 7 Securities license, and other certifications. Hundreds of clients entrust to him their pensions and their dreams, and he has made them handsome returns.

And he is honest.

In this election, he may be the only honest and qualified candidate to run.

Presently Scott Stringer is the comptroller, while nearly $1billion is missing in a fund headed up by the mayor’s wife, and he seems at a loss to comprehend it. This I state not as a general observation but rather from first-hand experience as I questioned him about this in March when he came to upper Manhattan to get the Latino vote.

After he gave his speech in front of a park, which, incidentally, the present administration allows to be illegally locked from the public by a select group of individuals who put a gate up and closed it off from other taxpayers – I asked him if he knew where the missing $ was. He tried to turn away, and claimed he did not understand the question.

Daby understands it, and answering it will be part of his job. If the funds are not embezzled, as they appear to be, then they at least need to be found, if for nothing else, to dispel the conspiracy theories.

Should he get elected, each and every one of the 850 employees in his office will be reached out to – personally interviewed – and if need be, investigated. The good ones will stay, the bad ones will be shown the door. That’s how the private sector operates, and there is no reason a public office ought not to follow suit. The public has a right to get the most for their money, and to know what happened to the funds not accounted for by Mr Stringer.

Daby is also bringing to that office a great set of skills – he has been involved in a number of successful funding operations – such as Mama Leone’s Meatballs and Gregory’s Coffee (about 32 branches in NYC) – has met personally with over 300 CEOs, has done IPOs, and has extensive knowledge of many market sectors from metals to biotechs.

But Daby is not limited to finance; he is a multi-level individual, and my relationship with him is on many levels; I am privileged to be working on his campaign. But I am also his stamp dealer, creating for him a unique collection with an emphasis on the nations in his background – Benin, Cameroun, Congo, Cuba, France, Mali, Poland, Puerto Rico, Spain, Togo and the United States.

Some days we spend hours looking at these treasures he acquired as a child, working for them sometimes rather than cash. Tens of thousands of stamps are sorted by us, with most going to a pile that he will give away to families that can use them as educational tools. He started this and other giveaways right on his block, handing out toys, clothing, food and other items to those in need twice a month. The stamp idea is well received, as parents are able to keep their offspring busy while teaching them, and learning themselves, from the stamps. On a larger scale schools could be using them, there is a certain charm in stamps that textbooks lack, and a teacher can make lessons fun and interesting in a unique way with stamp packs. US presidents, wars, politics, science, inflationary periods and propaganda in over 100 languages with images to accompany the ideas they portray, who could ask for a better learning tool?

We pour over the history and languages of these nations, which is not just interesting background but of current use. His role as money manager focuses his attention on the resources that change hands in today’s market. Gold, silver, graphite and cobalt – Daby has his eye on all of these, including the latter, which he predicts will be grabbed up by developed nations. I too have my eye on cobalt, and other metals, as the basis of pigments, which I acquire at Kremer, the specialty artists’ supply shop on West 29th Street in Manhattan. We swap notes on the elements and their role in art and commerce.

His broad ranging interests include music – he plays the trumpet and grew up listening Verdi, Puccini and other opera composers at the Met. On a daily basis, he grooves to house and hip hop, bringing him into contact with the likes of A$AP Rocky of East Harlem and Crown Royyaltyy; Mogul Tree Mike (MTM) is a good friend.

He and his fellow brokers can be seen around town at the Ukranian Institute for art openings, or out on Staten Island at Big Angies, to which he was introduced by fellow securities broker turned thespian, the late Tony Decicco (Tony D of Staten Island Hustle, which aired on CNBC.)

Much of this art and music world, now closed in so many ways, he finds on a site called Clubhouse – on which he will was interviewed on Monday, 19th April from 7-8pm EST. Check him out on that site and learn more about him.He’ll be doing another interview there in May.

Some Artvoice readers already know about him from two previous posts – one last year and the second in January of this year – and will see him as a philanthropist and civil rights activist. Epoch Times/NTD TV likes to talk to him and film him at protests in NYC.

But some might ask why a comptroller need understand the arts or be concerned about civil rights?

For NYC, the arts are a major industry. Tourism is the #1 business of this town, and tourists expect to be entertained. Daby has a vision of working closely with them, talking already to club promoters and artists about how to get back to work. As comptroller, he can allocate funds to the arts, and to such projects as UV cleansing systems – already in place in some places around the city – which would help fight the virus and give people the confidence to visit again. Once in office, he plans to reach out to such leading men such as Sir Cameron Mackintosh, who has had many successful shows on Broadway and has thus brought much to this city. Talking to him and the other producers and media heads will be a priority.

Civil rights might pale in comparison to re-invigorating industry, but part of the job of comptroller is overseeing investments. Presently, too much of the budget is invested in countries where people are forced to slave away, where people are killed for their political and religious beliefs, where women are forced to have abortions based on their race, where racism is enforced; some say Tammany Hall is in bed with 21st century nazis. What a shande for Mr Stringer who ought to know better.

But this is just history repeating itself. Many New York politicians were once ready to support the Axis when Hitler’s pal William Randolph Hearst held court in this city, twice winning a congressional seat and once running for president.

And that is not just ethically bad, it is bad for New York. Not just the city of New York, but the state. Investments can be better made in New Yorkers – not in foreign states with dictators who suspend elections – Daby has a record of investing in New York – check out the aforementioned Mama Leone’s Meatballs and Gregory’s Coffee. He has a desire to invest more – researching UV light factories with local new Yorker James Behr – which would create jobs and vocational training opportunities for high school students.

Everything is inter-related. Safety, health, education, art and the economy are all spokes in the wheel. Having a comptroller who is also a philanthropist, musician, opera lover, house music fan and arts lover with an office on Wall Street is the equation that the Apple needs to bring it all back. This year I’m supporting the person whom this city, and this state, needs: Daby Benjamine Carreras.

EARTH DAY: Let’s use up the planet and bless the future with its corpse
NEW MUSIC: Pop Folk artist and Kardashians bud Harry Hudson releases ‘TAKE MY TIME”