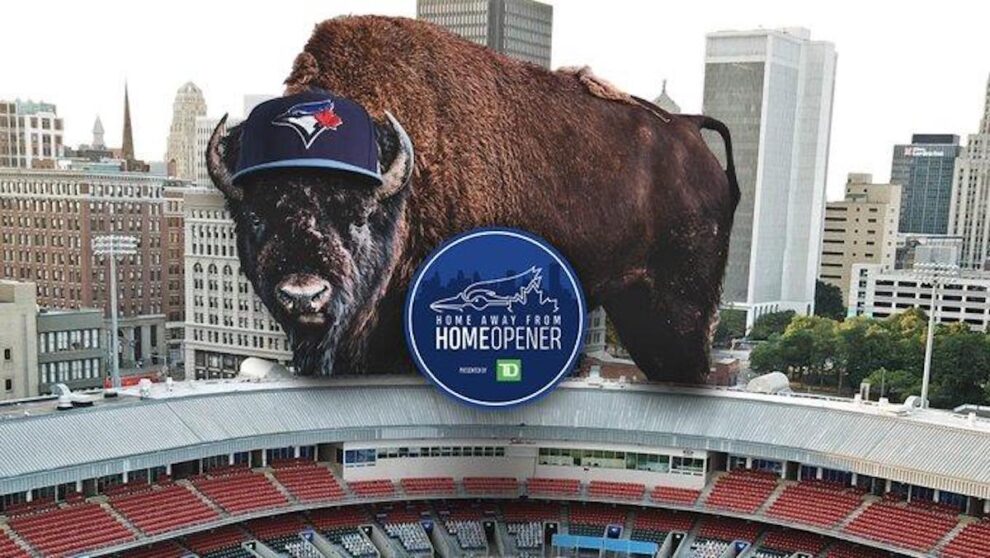 With fans in the stands, Buffalo is finally a Major League City

2020. The Year of the Pandemic. The Toronto Blue Jays, turned away at the Canadian border and forced to find a temporary venue, landed here in Buffalo, the home of their AAA affiliate.

Those games were important. Placed in the record books for posterity that official Major League Baseball games were played here in Buffalo. The first games played in the Majors in our city since the Federal League folded in 1915, sinking Buffalo’s franchise hopes with it.

Yet last year had a weird feel to it. Sahlen Field was not only closed off to fans, but completely walled off from any peering eyes. The only place to get a glimpse of the playing surface was from the I-190, while traveling at 50-55 MPH, or from one of the windows high up in the One Seneca Tower, for the few lucky enough to have connections with those in charge over there. For the rest of us, hearing the strains of  “OK Blue Jays”, the team’s forever 7th inning stretch anthem, or snagging a baseball, would have to be experienced from the other side of Oak Street. And even there, police officers came by from time to time to shoo people away.

The Canadian border remains closed, although it appears that talks are stirring to finally begin planning for the phased reopening between the two countries. With strict Covid policies in Canada still in place, the Toronto Blue Jays were forced to again find temporary quarters in the States.

They started the regular season in Dunedin, Florida, their spring training home in a small bedroom community suburb just outside of Clearwater. Crowds were sparse and dispassionate about the Blue Jays. Would the team get a better reception elsewhere?

That question was answered this past Tuesday. Just under 6000 fans, the maximum allowed under the ever changing Covid guidelines, “packed” Sahlen Field to be a part of history. The Toronto Blue Jays squaring off against the Miami Marlins.

The changes in the ballpark were evident everywhere. Much of the concourses were emblazoned in fresh blue and white Blue Jays murals, along with signage in the team’s distinctive font. And lo and behold! Our 33 year old ballpark finally… finally!… Has real bullpens. When the MLB expansion committee toured our ballpark way back in 1989, they chided and tsk-ed tsk-ed the Buffalo organizers for the little league bullpens sited along the basepaths and within the field of play.

Now the stadium boasts a two tier bullpen in right center field which has every bit the feel of any major league installation.

The fans here have been into it during all the games, with Vladimir Guerrero Jr. the undisputed fan favorite. He did not disappoint, blasting a three run home run on the first pitch of his second at bat this past Tuesday, powering the team to a 5-1 win over the Marlins. Fans were ecstatic, hanging on every pitch and up on their feet during the 9th inning when the Marlins loaded the bases and had the tying run at the plate but did not convert.

Same on Wednesday when the team roared back from a two run deficit in the 9th inning to plate three runs and steal a 6-5 win.

These are the Marlins, by the way. Yes the same Marlins, who with then owner Wayne Huizenga waving his checkbook and promising robust TV ratings and premium ticket sales from a wealthy south Florida market, snagged one of the two expansion teams in 1993 that Buffalo had been competing for, perhaps dooming Buffalo’s MLB aspirations forever.

The Blue Jays have not officially announced playing dates here in Buffalo beyond the July 4th weekend, although even if the border were to reopen this month, it would be a while before the team could transfer their entire operation back to Toronto and their home stadium. So look for the Blue Jays to be here until at least the end of July, and if the (Canada Prime Minister) Justin Trudeau Covid Carousel continues, Buffalo may enjoy having Major League Baseball for the full schedule of 59 home games right up to October 3.

So what else should the Blue Jays do during their time here?

This past week, the stadium was opened to roughly 6600 ticketed fans, with vaccinated fans sitting side by side on the third base side, while unvaccinated fans scattered in socially distanced pods down the first base side. Cardboard cutouts of virtual fans graced the 200 level. The attendance will increase to a maximum of 7600 ticketed fans next week for the much anticipated Yankees series.

In an ideal situation, the Blue Jays, working with New York State health officials, would declare the entire stadium a vaccinated section and tell everyone else to stay home. A month ago County Executive Mark Poloncarz floated the premise of not allowing any unvaccinated fans into Highmark Stadium or Key Bank Center this fall, and of course, got some pushback from the usual detracting corners of society.

Poloncarz was right and should keep the pressure on. These vaccines work. If everyone had the shot in their arm by now this would all be over. Those who choose not to get vaccinated and in some cases brag about their defiance, often because of their rabid political leanings, end up causing the rest of us potential harm and needlessly extend this pandemic and all the protocols that are still in place.

Don’t want to get vaccinated? Fine. Then stay home. You forfeit the privilege of attending a Blue Jays game (or Bills or Sabres or concerts or Shea’s). Stand on that hill and fight your fight. Or die on that hill, as some of you surely will.

Since the Blue Jays most likely will not outright ban unvaccinated fans, here is an idea that should be implemented as soon as possible. Declare the entire 100 level the vaccinated section and open up all the seating for ticketed buyers. Then set up the socially distant unvaccinated seating on the 200 level. Ditch the cutouts (those are soooooo 2020 anyway). Unvaccinated fans would enter via the left field Oak St entrance or right field Washington St entrance only and be directed up the stairs, not permitted to enter any part of the 100 level concourse.

Ticket prices for the unvaccinated 200 level should start at $150 each. Stop by the pop up vaccination site out on the plaza on your way into the ballpark, get your Covid shot, and $100 of your ticket price will be refunded.

Short version of all this… GET YOUR DAMN SHOT!

This plan would safely increase capacity to about 13000 fans.

The Promotions and Mascot

With the team spending millions to update and retrofit Sahlen Field to their standards, including new lighting, outfield turf, the bullpens, top notch clubhouses and training areas and of course the signage and paint, little attention has been paid to the promotional aspects of the event itself.

It is not too late to bring dollar dog nights, fireworks on Friday nights, dollar at par nights (yes many of us Americans have drawers full of loonies and toonies that we have not been able to spend so throw us a bone here). We need Ace the mascot and the dugout dancers to lead the fans in the 7th inning stretch. There is a distinct choreography to the Jays fight song and Buffalo fans need only a tutorial to get it down.

Major League prices? Yes folks we are now in the stratosphere of $11 craft beer. Yet the lines at the concession stands were long and robust throughout the concourses this past week, and fans were eagerly gobbling up merchandise at the Jays Team Shops. What was missing? Some of the specialty stands behind home plate were closed. And our favorite Canadian dish, Poutine, which is on the list of concession fare at Bisons games, was nowhere to be found. This needs to be fixed.

Small distinction. The music bumps and game day presentation last season in front of a closed stadium had much more of a Toronto feel. DJ Tiesto and house mix dance music, and we then gave props to announcing weather conditions in Celsius and wind speeds in kilometres. Tweak this and perhaps the presentation of “Oh Canada” in an English and French mix and we’re on our way.

Blue Jays flags ringing the outside plaza were decorated in rainbow pride, and a pride logo on the left centerfield wall also emblazoned with the stripes of transgender rights and dignity. It was the Toronto Blue Jays who first introduced the concept of Pride Nights back in 2004, recognizing and supporting the LGBTQ community. Thanks Toronto for your support and affirmation.

Remember them? Our AAA Buffalo Bisons have relocated their home to Trenton, New Jersey, which used to house a AA team until a massive minor league reconfiguration took place starting this season and cost them their team.

The Bisons are 14-12 on the season in the Northeast Division of the new league configuration named “Triple A East”.

The Bisons will return to Sahlen Field this season should the Blue Jays get permission to return home to Rogers Centre in Toronto.

Meantime, the Bisons will make their first appearance at Rochester’s Frontier Field this month. The six game set will run from Tuesday June 15 through Sunday June 20 and this will give Buffalo fans ample opportunity to see their team in action.

As in Buffalo, there are vaccinated sections and socially distant unvaccinated areas of the ballpark. Got to redwingsbaseball.com for information, rules and protocols, and seating. Advance purchase tickets are cheaper.

Yet again, the advice from this corner? Ticket prices for unvaccinated fans at Frontier Field should start at $150.

Yeah, it would be good to be King for a day.