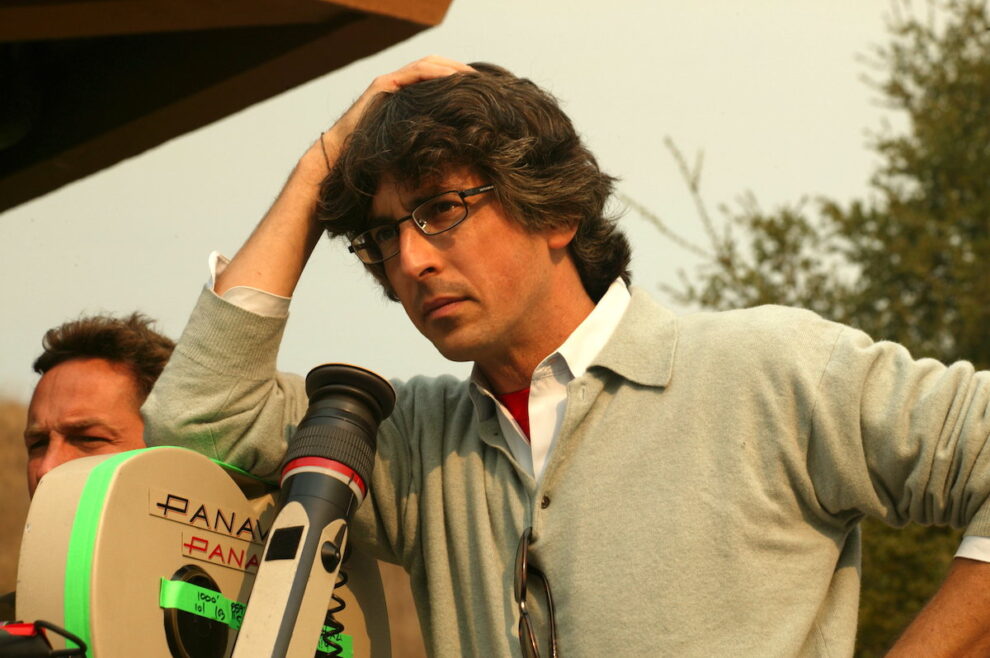 “One of cinema’s greatest uses or values lies not just in its ability to capture reality, but to capture or suggest a dream. Other narrative arts could be related to dream as well, but only the cinema is able to do it with actual images corresponding mysteriously to reality and without a single spoken word – the language of dream.” – Alexander Payne

Payne is known for producing thought-provoking yet darkly comic pieces that explore human nature in everyday, all-American settings. His successful career in the film industry has spanned three decades, and he frequently films in his hometown and muse of Omaha, Nebraska.

Payne grew up in Flyover Territory, that great tract of the United States that encompasses the Midwest and Great Plains, and he still spends part of the year in Omaha, Nebraska. He completed his high school education in the state before heading to California and Stanford University, where he majored in History and Spanish.

After graduating from Stanford in 1984, Payne attended the UCLA School of Theater, Film, and Television, where he completed a Master of Fine Arts (MFA) degree in filmmaking. In 2004, Payne received an honorary Doctorate of Humane Letters from the University of Nebraska for his contributions to film.

At the end of his graduate studies in 1990, Payne’s thesis work, “The Passion of Martin,” based on the dark, psychological novel “El Túnel” by Argentinian Ernesto Sabato, was among the student films shown to a film industry audience, where it garnered considerable interest and got his foot in the door of professional filmmaking. The movie, which its director has described as a “funny tragedy,” was also shown at film festivals around the world.

Simultaneously witty, shrewd, and insightful, Payne’s movies mix black humor with drama in thoroughly prosaic everyday settings. Payne’s first feature after UCLA was “Citizen Ruth” (1996). This was the start of a quartet of films written with Jim Taylor (“Citizen Ruth,” “Election,” “About Schmidt,” and “Sideways”) and marked the deep-dive into the psyche of the “everyman.” Despite, or perhaps because of, the dark edge to the humor in the movies, the characters feel sympathetic and emotionally whole, realistic even as they try to cope with their difficult situations. These four scripts tread the fine line between humor and pathos with the clever use of language – particularly the everyday argot of the Midwest.

A young Alexander Payne’s first foray into filmmaking was in the 1960s when his father won a Super 8 projector in a giveaway from Kraft Foods. Payne started collecting films, buying prints particularly from Blackhawk Films. As a teenager and avid filmgoer in the 1970s, he was immersed in the filmmaking style of the day, which influenced the realism that he injects into his films. Payne continues to respect and admire films from that period for their proximity to real life, saying that “there was just a consistently fine product turned out between “The Graduate” (1967) and “Raging Bull” (1980).”

Payne’s comic stories often feature human details of everyday life. This includes the couple that constantly fights in “The Descendants,” the destructive pseudo-political wrangling of high school in “Election,” and a pregnant woman struggling with addiction who finds herself used as a political pawn by both sides of the abortion debate in “Citizen Ruth.” Payne invites the viewer into sympathizing with seemingly unsympathetic characters, and while we are watching their behavior on the screen, we still care about them as people.

In “Sideways” (2004), Payne gives a picaresque twist to the oft-told road trip story. “Sideways” won both an Oscar and a Golden Globe for Best Adapted Screenplay.

“About Schmidt” (2002) mines pathos mixed with humor as it follows the quietly desperate Warren Schmidt as a newly retired man attempting to reconcile with his estranged daughter before her wedding. The movie, starring Jack Nicholson, became a critically acclaimed success that earned more than three times its budget at the box office. “About Schmidt” premiered at the Cannes Film Festival and received Golden Globes for Jack Nicholson and for the screenplay.

Payne’s intricate balancing act as a director in studiously refusing to take sides on moral and ethical issues also makes his films an uncomfortable joy to watch. Although “Citizen Ruth” expresses no opinion on the delicate abortion debate, it does try to present a balanced view of individual and collective human behavior.

“Election” (1999), which features on Entertainment Weekly’s list of “50 Best High School Movies,” follows schoolgirl Tracy Flick in her desperate pursuit of the role of student government president. Payne has put together a wicked satire of the school election process, which doesn’t limit itself to presenting only through the eyes of the teens involved, but rather from the jaded eyes of a teacher who isn’t always Tracy’s biggest cheerleader. “Election” has become a cult classic. It is purported to be former president Barack Obama’s favorite political movie.

2011 saw the release of “The Descendants,” which Payne co-wrote with Nat Faxon and Jim Rash. The film, starring George Clooney, was a critical and commercial success after its premiere at the Telluride Film Festival. Common to Payne’s other movies, this story also centers around a flawed character forced into difficult decisions by circumstance. “The Descendants” was nominated for five Academy Awards, including Best Director and Best Picture, and it won for Best Adapted Screenplay.

Payne’s 2013 “Nebraska” has a quixotic vibe to it as it follows an eccentric Korean War vet as he undertakes an ill-advised cross-country road trip from Billings, Montana, to Lincoln, Nebraska. Unusually, Payne directed but didn’t write the script for “Nebraska,” but under his supervision, the movie – shot in black and white – demonstrates a bleak sense of melancholy underpinned by the central character’s relationships with those around him. The tragic-comic “Nebraska” resulted in Payne’s third Oscar nomination for Best Director.

With his most recent film, “Downsizing” (2017), Payne moves his everyman character into the future as he ponders how humans could manage the climate crisis by shrinking themselves down to the size of Barbie dolls. This foray into sci-fi attempts to prompt the audience to consider the questions of how technological change will affect humanity down to an individual level. “Downsizing” may well move us to the future, but the themes of the film still link to Payne’s fascination with the microscopic interactions between humans and center on character at the heart of bigger societal questions.

In 2021, Alexander Payne was the guest at the digital seminar “Five Things I’ve Learned About Filmmaking and Film Watching,” where he shared some of what he has learned during his career as a filmmaker and enthusiast. Payne joined Richard Peña, Professor Emeritus of Columbia University, in conversation to discuss the process of both creating and critiquing films.

Along with Gus Van Sant, the Coen Brothers and Wes Craven, among other directors, Alexander Payne collaborated on the 2006 “Paris, je t’aime,” an anthology film consisting of 18 shorts set in different arrondissements. Payne’s film is set in the 14th Arrondissement and features Carol, a first-time visitor to the City of Lights from Denver, Colorado, who tells us in her beginner French what she loves most about Paris. The film premiered at the 2006 Cannes Film Festival to favorable reviews.

Payne recently served on the International Narrative Competition jury at the 2021 Tribeca Film Festival and has previously been part of competition juries at the Cannes, San Sebastián, Sundance and Thessaloniki film festivals. He remains a committed cinephile passionate about preserving and promoting international cinema.