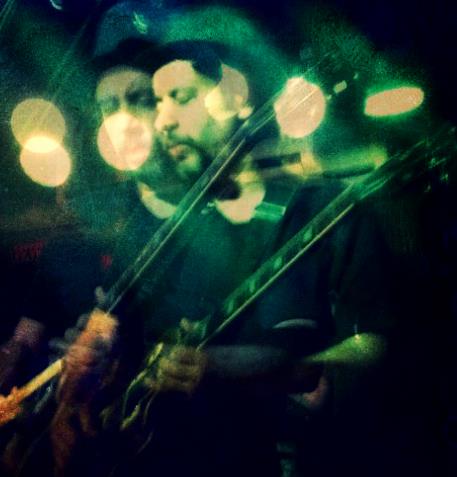 Habitual collaborator to Artvoice and the Frank Report, Brazilian writer and musician Paul Serran has a new single out called ‘Circle the Wagons’, released by Brazilian label Discobertas.

Paul Serran is  a rare kind of artist/journalist, a man trapped between two worlds, as it seems. A Brazilian writer – living in Rio de Janeiro – writing about American affairs? “I always anticipated a lot of skepticism”, Paul admits. “I guess we Brazilians are so used to doubting ourselves that we expect everyone else to do that, too.”

Author and publisher Frank Parlato doesn’t think that it’s strange. “I think it is advantageous to have a view of affairs from without”, Parlato says. “But Paul is a Brazilian only in name. He is much more of a cosmopolitan character with a strong grounding in not only American history and its institutions but in historical freedom principles.”

Paul was part of the underground rock scene in Rio ever since the mid-80’s, but it was only decades later, after a journalism career that included 2 books and many documentaries for TV, that he became a recording artist, way into his forties.

“To become a recording artist at 47 is insane, I know”, Paul laughs. “When I was 32 my father said I should quit because I was too old. In fact, I did quit multiple times, but the guitar never quite quit on me. So I kept at it.”

The man responsible for this unlikely turn of events was Rio de Janeiro’s Marcelo Froes, a journalist, researcher, label owner and publisher. His Discobertas label is packed with some of the top artists in Brazilian Popular Music, but Froes is also a huge ‘Beatlemaniac’ and rock enthusiast: “First I met the guy, later I heard him singing in a record and, finally, I saw him performing live. Great artist, sings and plays very well.”

Add to the odds of that happening, the fact that Paul’s first solo single was a Yoko Ono cover? How’s that even possible? “I guess he knew I had produced a CD of Brazilian female singers making a tribute to Yoko Ono in 2010.  So he felt at home to propose that.”

“John & Yoko’s Double Fantasy (1980) is a very important album for me”, Paul recalls. “And my version of Hard Times Are Over (2015) showed me I could play and sing like a real recording artist”, he recognizes that his own personal criticism always was a great barrier. “Yoko’s song is just so beautiful… it was also very fine to have Erika Martins from Autoramas singing harmonies.”

“I admire Paul’s commitment to his career”, Froes told us, “always making sure he makes his records with excellent musicians, producers and engineers. That makes a difference.” In fact, Paul, for a unknown middle-aged underground rocker, has a disproportionate amount of musical firepower around him.

One clear example of that is Fernando Magalhães, guitarist for one of Brazil’s greatest and most legendary bands, Barão Vermelho. Fernando is also a solo recording artist who has played as an opening act for the likes of REM and Joe Sartriani.

But he doesn’t find strange to be interacting with Serran. “Paul has a very developed musical personality, so I hardly even consider him to be an ‘underground’ artist”, Fernando explains. “I’ve known Paul since the mid-eighties. Paul was always very productive, and always played very well. Even back in the 80’s he already had a personal perspective, and was developing his own songs, which was very relevant.”

“Fernandão is one of the Godfathers of Rio’s rock”, Paul says. “He is also incredibly generous to his friends. Even as a very young man I remember thinking I had to emulate not only his playing, but his kindness, too.”

One of Paul Serran’s most forceful songs, Rock and Roller, released in his first album in 2015 but actually produced back in 2003, brings the trademark guitar work of Fernando Magalhães blasting in the forefront of the track.

“I think Paul Serran is very representative of Rio’s rock”, Fernando says. “He is always coming up with something new, always breaking new ground without losing sight of his roots. He brings credibility to Rio’s rock, and is one of its ambassadors.”

A decade ago, another partnership was to define Paul’s sound for good. “I first met Paul in a local pub called Saloon 79. I liked his voice and his repertoire very much”, recalls Kadu Menezes, a drummer and producer with many Gold and Platinum Records to his name, as a member of Kid Abelha or working with other top Brazilian artists.

“Kadu Menezes is obsessed with quality”, Paul observes. “The first time we were in the studio, he kindly but directly asked me, ‘Paul, don’t you know how to play your own song?’ (laughs) He was not wrong: I was out of tune, out of time…”

Today, Kadu is much more forgiving for Paul’s belated learning curve in the studio. “He was always very insightful and observant. It was a piece of cake for him!”

As Paul and Kadu lived in the same neighborhood, Paul tried to learn as much as he could, following his newfound mentor around gigs, rehearsals and recording sessions. In time, the work became seamless: “It’s very pleasant to work with Paul in the studio, he has lots of ideas, so it’s easy to find solutions for the creative problems.”

As the last decade moved to an end, Paul started to write predominantly for the English-speaking market. “I am interested in world affairs, always was. And the internet levels the playing field a lot.”

At one point Paul had 54k followers in Twitter, before he was deemed too dangerous by Big-Tech overlords and banned. Later, he started a collaboration with the Frank Report that is entering its third year. So it was not surprising that his songs also started to come out in English for the most part.

“He sings in English easily and it doesn’t sound strange”, Discobertas’ Marcelo Froes notes. Producer Kadu Menezes also mentions the aesthetic reasons for that: “He is a very eclectic artist, but I see a lot of folk rock influences in his music, such as Neil Young, Tom Petty, Johnny Cash.”

Now, wait a minute: isn’t it even odder to have a Brazilian rocker singing in English? “I don’t think it odd at all”, replies Frank Parlato. “Paul is not limited to any country or language. He speaks to deeper meaning and the emotions he conveys in this song are, I submit, very well suited in English – as one can hear from listening to it.”

During this pandemic, Marcelo Froes was not expecting much from Paul – or anyone. “I was surprised when he came with Circle the Wagons last month, almost one year after [his previous EP] the Quarantine Tapes. I liked the song immediately and It’s still growing on me.”

“I like the new single very much”, Fernando Magalhães weighs in. “It’s got great power. It’s amazing how he can always surprise me, and I’d say my favorite song of his yet is the new single.”

“His latest release has a subtlety and refinement that makes it great for focused listening and also – I would add – background music”, says Frank Parlato. “His rich voice and his songwriting skills – especially the lyrics  – match up well. There is a reason his audience is growing. He keeps getting better.”

“I recommend everyone listen to his discography, and listen to the evolution of the songs and recordings”, is Fernando Magalhães’ tip. “You will hear all this punch and intensity, and will notice how serious he is about his work.”

“I am not surprised that Americans – of the freedom loving variety – would take to Paul and find affinity”, Parlato opines. “To appreciate Paul Serran you have to approach him like he came from afar – if not another planet – from a country far far away and that coming among us he offered music and a fresh but hauntingly familiar sound that kind of echoes in our hearts – like some old song we heard as children and forgot forever until someone brought it back again. Serran’s music is like that.”