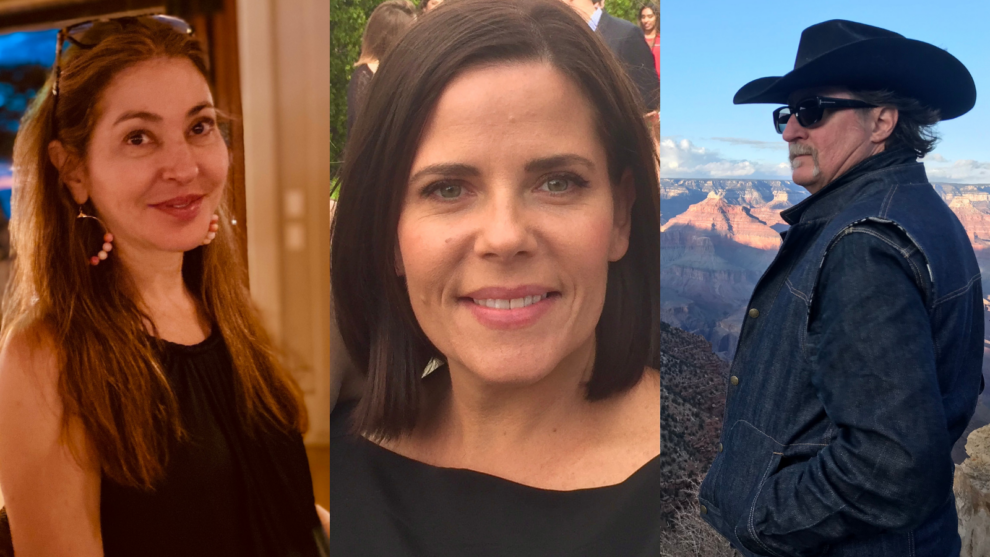 We interviewed the casting directors of HBO's Flight Attendant. Click here to read.

Today we’re speaking with John Papsidera, Kim Miscia, and Beth Bowling, the dynamic team of casting directors for the hit TV series The Flight Attendant created by Steve Yockey and starring Kaley Cuoco, Michiel Huisman, and Zosia Mamet. The series reveals the life of an alcoholic flight attendant who mysteriously wakes up in her hotel room with a dead passenger next to her.

The series is a success with the team of John, Kim, and Beth. John Papsidera is known for his impressive casting for big-budget films such as The Dark Knight Rises, Inception, Interstellar, The Longest Yard, and many more. His achievements in casting include 21 nominations and two Emmy awards. Similarly, Kim Miscia is known for her casting work in films like It’s Complicated, Grown Ups 2, Wanderlust, and various other television shows.

Casting director Beth Bowling is known for her work in Mr. Robot, Mad Men, and The Sixth Sense. In this interview, John, Kim, and Beth share their experience in casting for The Flight Attendant and how they have grown in the casting industry.

Tell us a bit about yourself. What was your first job in casting and how did you decide to pursue your craft professionally?

John Papsidera: I grew up the youngest of 4 children in my family. In a lot of ways, it made me an observer. I started acting in high school and went to Florida State University. Later I went to Circle in the Square to study and train as an actor.  I was living in New York and running a celebrity chef’s restaurant. I went to an audition for a commercial one day and it hit me afterwards that I lacked the confidence it takes to be in front of a camera. That day started a process of change in my mind that ultimately led me to casting. My first job in casting was at the Mark Taper Forum in Los Angeles as a casting intern. Within 2 weeks the casting director, Stanley Soble offered me an assistant position and thus began my journey as a Casting Assistant, Associate and ultimately, me starting my own casting company, Automatic Sweat.

Beth Bowling: My first casting job was an unpaid position. I was asked to help find extras for the independent film The Incredibly True Adventures of Two Girls in Love. I was given a video camera and hit the pavement looking for high school kids in the Bronx. I continued to work for free on quite a few independent films. I love independent films and wish more were made today. My first paid job was working on a nationwide search to find a boy who could play Demi Moore’s son in The Juror. I was hooked after that.

Kim Miscia: I was the girl in the neighborhood who was always corralling my friends and siblings to put on plays for our parents. I spent my childhood watching old movies, watching tv and reading voraciously about the behind-the-scenes in Hollywood. I developed an aptitude for recognizing talent and remembering actors. After college, I moved to NYC to intern for the great Juliet Taylor on the Mike Nichols film, Regarding Henry and the Woody Allen Film, Shadows and Fog.  Ellen Lewis, Juliet’s associate, was casting Goodfellas at the same time.

I still remember the working title: Wise Guys. I was in heaven, coming home to my roommates every night to tell them I’d met Harrison Ford, Woody Allen, and on and on…When Ilene Starger, former VP of Casting at Buena Vista/Touchstone, moved to NYC she hired me and I worked with her for five years. We worked on a variety of feature films including The First Wives Club, The Parent Trap and Sleepy Hollow.  From there I worked as the Manager of Casting at HBO Films for Carrie Frazier. I really decided to make a go of things 20 years ago when Beth and I partnered, braving the ups and downs of the early years of as casting directors in our own right.

Who are some of your favorite long term collaborators?

JP: I owe a lot to the people that believed in me from the beginning, gave me an opportunity, and continued to collaborate and employ me over all these years. The producers Suzanne and Jennifer Todd supported me in Austin Powers, and International Man of Mystery. They also introduced me to Christopher Nolan, Jonathan Nolan, and Emma Thomas for Memento, which now has turned into over a 20 year relationship, friendship and collaboration. Gavin Polone also has been a friend and supporter for so many years starting with Drop Dead Gorgeous all the way through Zombieland: Double Tap. Mark Gordon, Ivan and Jason Reitman, Ruben Fleischer, David Koepp, Roland Emmerich, Chuck Roven, Alex Gartner…..it is a long list of people that have helped me, believed in my talents and trust me again and again with their projects.  I’m eternally grateful for them all and to call them my friends.

BB: On the casting side of things — I really enjoy working with my casting executives/colleagues at Universal Cable Productions and Warner Media.

KM: First let me say that I feel grateful to everyone who gave me an opportunity in this business-  -Juliet Taylor, when I was still wet behind the ears, my mentors Ilene Starger, Carrie Frazier, and Gail Levin.  As for collaborators:  Kevin Wade and Leonard Goldberg have been two of my most cherished collaborators.  I’d never before cast a series as long running as Blue Bloods and probably never will again, as the model is changing. Leonard taught me so much about casting for network television and Kevin is a brilliant writer, loyal friend, and respectful showrunner.  Other long term collaborations I’ve enjoyed have been with Ken Woodruff, from Gotham and The Enemy Within and Rebecca Cutter, from Gotham and Hightown.  Casting Third Watch and subsequently consulting for John Wells was a godsend early in my career and a relationship I’ll always be grateful for.

What character was the most fun to cast for The Flight Attendant?

JP: The one I had nothing to do with, Cassie.  LOL.  Kaley Cuoco is the driving force behind everything special in this project.  Her passion, vision and belief I believe truly made this special.  Beyond that, Rosie Perez as Megan Briscoe and Zosia Mamet as Ani Mouradian probably provided the most fun as they started as just ideas in my head and turned into successful realties.

BB: There were so many fun roles in TFA to cast which is what helps make it such a great show. I do love all the strong female characters. Michelle Gomez, Ann Magnuson and Bebe Neuwirth were fun additions to our other strong female actresses.

KM: Every character was fun – truly! Because Kaley’s reputation precedes her and because it was so well written, the  best and the brightest in NY wanted to audition for The Flight Attendant. We had an embarrassment of riches on our hands. I think Nolan Funk as Van, Yasha  Jackson as Jada and Deniz Aksenkz as Max particularly shine.

What are some philosophies you have when it comes to casting?

JP: Philosophies may be a big word for it, but for me, it encompasses many different aspects. You are always looking for a unique interpretation of a character that only exists, in most cases, as words on a page….my job is to find the soul of an actor that matches that character.  So, it is a combination of diligence, openness, imagination, collaboration, kindness, cleverness, vision and humor that I truly believe all goes into my craft……getting the best from every actor, director, producer, agent, manager and executive that I can, by any means necessary.

BB: It doesn’t matter if you have little time or a long time – whatever time you have is how long it will take to cast the part.

KM: Always give actors chance after chance – actors grow as people and in their craft. Understanding  the tone of the show is the compass to casting it. Get to know the people you’re working with – this gives you critical insight into their taste and likes/dislikes.

Who are some of your influences?

JP: Bruce Springsteen, David Letterman, Dwight Yoakam, John Sayles, Jimmy Stewart,  Ed Ruscha, James Cagney…..none of which have anything to do with casting directly, but have had huge influences on my life.

BB: A current major influence in my life is my son, Gavin. He is responsible for Young M.A. being cast in season 4 of MR. ROBOT.  When Sam Esmail was telling me about the vision he had for the character of “Peanuts” — I immediately texted him to remind me of the name of the female rapper he was into at the time. Sam and I watched some of her videos and she came in to audition. She was the only one we saw for the role and was perfect for the part. Thanks, Gavin!

KM: I’ve been greatly influenced by my mentors, who I mentioned above, and by the strengths of my partner, Beth Bowling, and the talents of our long-term associates Michael Rios and Josy Rodríguez. I find everyone I’ve worked with has something to teach me.  Remaining open and seeking to understand others has been key to my growth as a casting director I believe.

What is your dream project? Dream collaborators?

JP: Looking back at the sum total of the artists I have been given the opportunity to work with…..so I guess I have been living my dream already, with very few exceptions.

BB: I am still dreaming about what my next dream project would be. Ideally I want to work with people I respect, admire and can have a fun creative collaboration with.

KM: I’m not just saying this because of the Emmy fanfare (I swear!) but The flight Attendant was a dream project. The people. The writing, the culture of respect and collaboration.  It was literally fun to go to work every day.  As a woman, I look forward to working on more projects written and produced by women since they still comprise a smaller percentage of the industry and I love being part of moving the needle a little bit.

Where can we find you on social media?

JP: Nothing personally, only my restaurant, The Waffle (@thewafflela) and my art gallery, The Salon at automatic sweat (@the salon_la)…..both on Instagram.

BB: I don’t really do social media at this time but check out @flightattendantonmax on Instagram!
KM: I’m on LinkedIn under my name and Instagram @kim_miscia. Also Facebook, Bowling/Miscia Casting. Thanks for this opportunity!

Online Alt-Text: Casino Industry Booming In 2021
What Are The 6 Worst Mistakes Landlords Make?