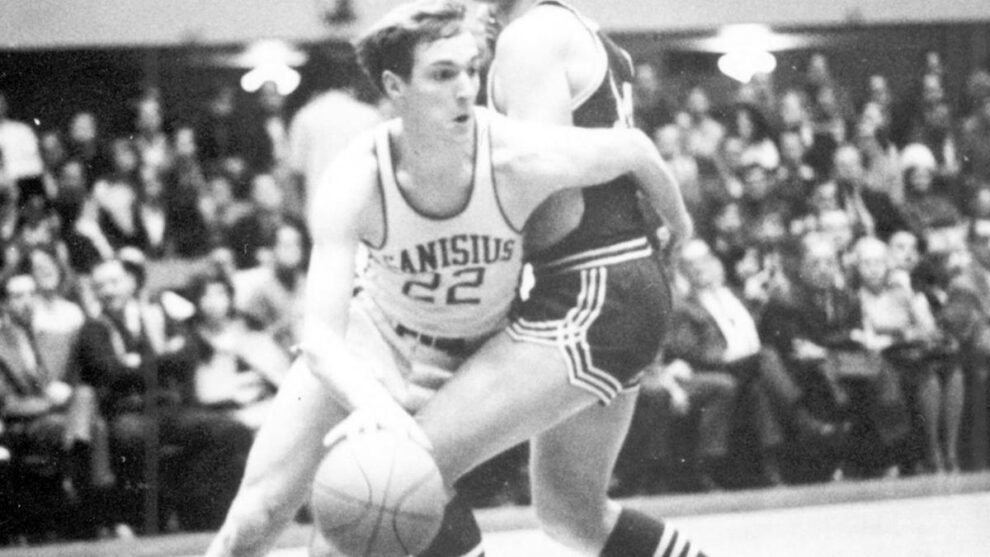 Tony Masiello is well ensconced in Canisius College basketball history, as well as the history of NY politics for his service as an elected official for 35 years, including three, four-year terms as mayor.

As the oldest of seven children (i.e. five sons and two daughters), much was expected of first-son Masiello, per traditional Italian credo and determined by family necessity. Hence, a young Masiello was summoned into action soon after his birth in 1947. He was raised and bred for leadership as a promising youngster on Buffalo’s Italian West Side in the 1950s and 60s, residing at 1336 West Avenue and nestled in a blue collar, hard-working neighborhood. Basketball was young Masiello’s first love: Masiello and his basketball brothers (Vito, Michael, and Johnny) practiced and honed their early basketball skills in the backyard with Tony literally holding court and where lessons were learned, using that hoop that Masiello’s father nailed to a tree as their goal.

Young Masiello learned about caring and education from his mother, Bridget Masiello; he learned about the importance of rigor and commitment by observing his father, Dan Masiello, thereby embracing his “hard work” values as a 30-year, city sanitation worker: As the oldest and first-son of proud Italian parents, he had no choice but to succeed – failure was not an option.

Masiello was the first of the family to attend Coronation of the Blessed Virgin Mary School, a small two-story building that had no gym but was located close enough to home so Mrs. Masiello could watch her children walk to school. The Masiello brothers, Tony and his younger brother, Vito, led the school’s basketball team to its first diocesan championship.

To no one’s real surprise and based on athletic merit, Masiello earned basketball scholarships at Cardinal Dougherty HS and then at Canisius College that paid his tuition and fees. “Tony always showed that fighting spirit. I knew then Tony had great leadership, not just because he was tall and good-looking, even ruddy, but he was always a gentleman, respectful, and very appreciative,” remembers former Coronation Monsignor Richard S. Amico.

As a youngster at 6’4” with solid basketball skills, Masiello recalled having dreams of playing professional basketball. “I spent all day and night in gyms and on playgrounds throughout the city of Buffalo (i.e. Butler Mitchell Athletic Club, Knights of Columbus, Delaware Park Basketball Courts, Schools 19 and 52, and the Reese Basketball Courts). Sports helps you at an early age to relate to people from different neighborhoods, different colors, and different walks of life.”

Masiello was a three-year starter at Cardinal Dougherty HS, averaging 18 points as a junior and was league-leading scoring champ in 1965 with 21 points per game. He led his team to the Manhattan Cup Championship in 1963, was runner-up in 1965, and named to the All-Tourney team at the Hoyle Tournament in Pennsylvania.

At Canisius College, Masiello helped lead Griffs’ teams to victories over powerhouses such as Georgetown, Providence (ranked #3 in D-1 in 1967), Seton Hall, St. John’s, Xavier, and Syracuse; he was selected as the 15th all-time best at the Canisius College 150 Sesquicentennial Anniversary in 2019.

In his final game against Niagara and Calvin Murphy, Masiello amazingly netted 35 points. Masiello saved his very best to the end. Masiello was 13 for 24 from the field, most of his buckets coming on swishers from 15 to 20 feet out; he was nine for 10 from the charity stripe, including two free throw makes in the final seconds of the game to seal an 81 to 79 most memorable win before a packed house at the Memorial Auditorium, leaving Masiello physically exhausted afterward and restraining his emotions.

“I owed this game to my school – Canisius. I also owe it to my coaches, Mr. MacKinnon and Mr. Markey. I am deeply moved by it all. I am happy, and I am sad – happy because we won and sad because, for me, it’s all over. My basketball career at Canisius is over. I will never forget my four years at Canisius,” passionately said Masiello immediately after the game. Masiello talked about his future, “I want a chance to play basketball in the NBA or in the ABA or Europe – anywhere. I just want a chance.”

In a column and tribute written by Phil Ranallo of the Buffalo’s Courier Express the next morning (March 10, 1969), justly affirmed Masiello as a future hall of famer for Canisius College Men’s Basketball, saying for the annals and for posterity:

“Tony Masiello, at 6 feet 4 inches, spent three years in the basketball jungle – the snake pit under the backboards – and did battle with the redwoods of the sport, those athletes who stand 6 feet and 9 inches and taller,” acknowledged Ranallo.

Coach MacKinnon emoted a heartfelt compliment to Masiello after his last game, “Tony is one of the greatest, most dedicated players I’ve ever coached. With Tony, from the first game he played for me right through tonight, it’s always been the same. It’s been the team first and Tony second.”

Masiello earned his Bachelor’s degree from Canisius College in 1969, and Masiello was drafted in the third round by the Indiana Pacers of the ABA in the 1969-70 season but did not make the final roster. Masiello tried out for the new first-year Buffalo Braves and did not make the team, unfortunately. Locally, most believed that Masiello should have made the Braves team.

TONIGHT: Ten Cent Howl play the final Thursday & Main summer concert series event
The World Might Be Free of War If It Stopped Killing in The Name of Religion