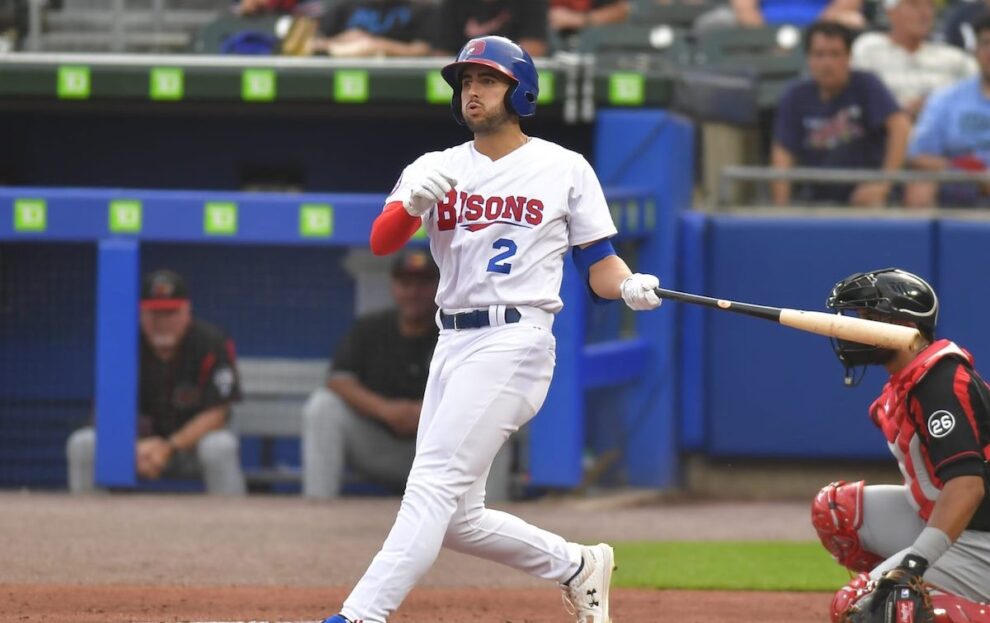 In a perfect world, the Buffalo Bisons and the Durham Bulls would be squaring off in the International League’s Governors Cup championship series to claim supremacy of the top tier of Minor League Baseball and earn a trip to the AAA World Series.

But, alas, the world today is far from perfect. In case you missed it while the pandemic hit us, the minors underwent a huge contraction and reorganization. The International League, for the most past, is now called “AAA East”. And the Bisons compete in the “Northeast Division”, which essentially is the same grouping of six teams from the former league.

Nonetheless, the Bisons are the 2021 “AAA East Northeast Division” champions, posting a 71-46 record to earn the third best record in all of AAA baseball.

For first year manager Casey Candaele and his squad, this was an especially sweet accomplishment, facing hurdles that no other team in minor league baseball had to endure.

To begin with, the team was forced to move their “home” to Trenton, New Jersey, which would allow the parent club Toronto Blue Jays to set up shop here in Buffalo while the Canadian border was closed to team travel due to pandemic restrictions.

That meant that the Bisons were not only living in temporary housing, with no plan or idea when they might be returning to their digs in Buffalo. But their adopted home also had them wearing the uniforms, logos and indicia of their departed AA team the Trenton Thunder at their home games. Trenton being a former New York Yankees affiliate, that meant donning the colors and swag of a hated rival.

The Bisons soldiered on. And piled up the wins, while most of us were paying attention to our newly adopted MLB team, the Toronto Blue Jays. And when the Bisons finally returned home to an appreciative and welcoming crowd on “opening day” August 10, they were actually in striking distance of first place, trailing the perennial division champs Scranton/Wilkes-Barre by just a few games.

“It’s been a different guy each night. This team has so much togetherness it’s kind of amazing actually,” said outfielder Christian Colon, after delivering what was almost a grand slam home run in last Sunday’s home finale. That gave the team a 6-4 victory (his hit was scored as a ground rule double to drive in two runs).

The Bisons run to the division title happened largely due to an incredible seven-game sweep of the Scranton/Wilkes-Barre RailRiders earlier this month, on the road no less. Colon was the voice in the clubhouse exhorting his teammates to step it up. Several players have acknowledged that it was Colon’s strong words that inspired a 12 game winning streak and a championship. The team even had designs on catching the powerhouse Durham Bulls, to clinch the regular season-best overall record and the league championship. No playoffs were planned this year due to the extension of the regular season into early October.

Colon’s heroics capped a final week of home baseball which produced incredible memories and fantastic finishes all week long, very reminiscent of what playoff baseball would look and feel like had there been a postseason tournament.

“Well, we’re the division champs now and looking forward to the playoffs. Oh… wait. Never mind,” quipped Candaele a couple of weeks back when the Bisons clinched their title, describing how many of his players hung out in the clubhouse awaiting the results of the RailRiders game to put an exclamation on their accomplishment.

Two decades ago, the Bisons were a perennial elite team, with multiple division titles and three league championships to their credit, all under the Cleveland Indians umbrella.

But the last playoff appearance, way back in 2005, ended in heartbreak, as the Bisons took the first two games of a best of five series in Indianapolis, only to come home and be swept in three games at the downtown ballpark.

Since then, it has been pretty much a run of futility. There have been three organizations as parent teams, Cleveland, the New York Mets for four seasons, and starting in 2013, the Toronto Blue Jays during that run.

There have been some notable names as team managers – Torey Lovullo from the Indians, Wally Backman from the Mets and Bobby Meacham from the Blue Jays among them. None were able to cobble a winning program the way Candaele did. “That’s one heck of a list of guys you name there”, said Candaele, clearly reveling in the team’s accomplishment.

Candaele was a mainstay and fan favorite with the Bisons back in his playing days. Always known for his sense of humor, his warmth, and his sharp ability to blurt out a funny quip for every occasion, he was quick to pass the praise to his players who coped and flourished during this once-in-a-lifetime unusual season. “These guys played for each other and supported each other through and through. I’ve been with many a team and it might sound cliché but that togetherness that bonding amongst teammates is vital to success. And we got it here.”

For the Buffalo Bisons’ organization, these two seasons, and particularly this year, were also a once-in-a-lifetime challenge. In the span of two weeks in July and August, the team had to deconstruct the physical plant and branding of the departed Toronto Blue Jays, and ramp up hiring and staffing to welcome their fans to what was a 26 game home season.

They met the call, but not with some hiccups. Like most businesses these days, recruiting sufficient game day staff was a challenge. Even the WCC mascot race was short staffed, with characters Atomic Wing and Beef on Weck noticeably absent. (For this keeping track at home, Bleu Cheese was the 2021 champ, and was pretty much a speed terror on the warning track all summer).

What the team did inherit was a ballpark full of capital improvements, to the tune of millions of dollars. State of the art clubhouses, a batting cage facility housed beyond the right field parking lot, new bullpens, a new grass playing surface, and a new LED field lighting system, which even does fan show pyrotechnics.

It all returns on April 5, 2022, which means a six-month offseason instead of the usual seven months.

Will Casey Candaele be back? “I’d like to be back. I love Buffalo. It’s such a great city,” Candaele responded, coming across with true sincerity instead of the normal platitudes when asked such a question. “We’ll be having those conversations with the Blue Jays right after the season ends.”

As for his predictions on the Blue Jays, now locked in a race to the finish line for one of two wild card berths in the American League? “They’re going to get a wild card, then win the wild card game, then the division series, the ALCS and on to the World Series where they’ll win it all, “ Candaele replied, with tongue in cheek.

“And remember when it happens, that path to the championship came right here through Buffalo.”