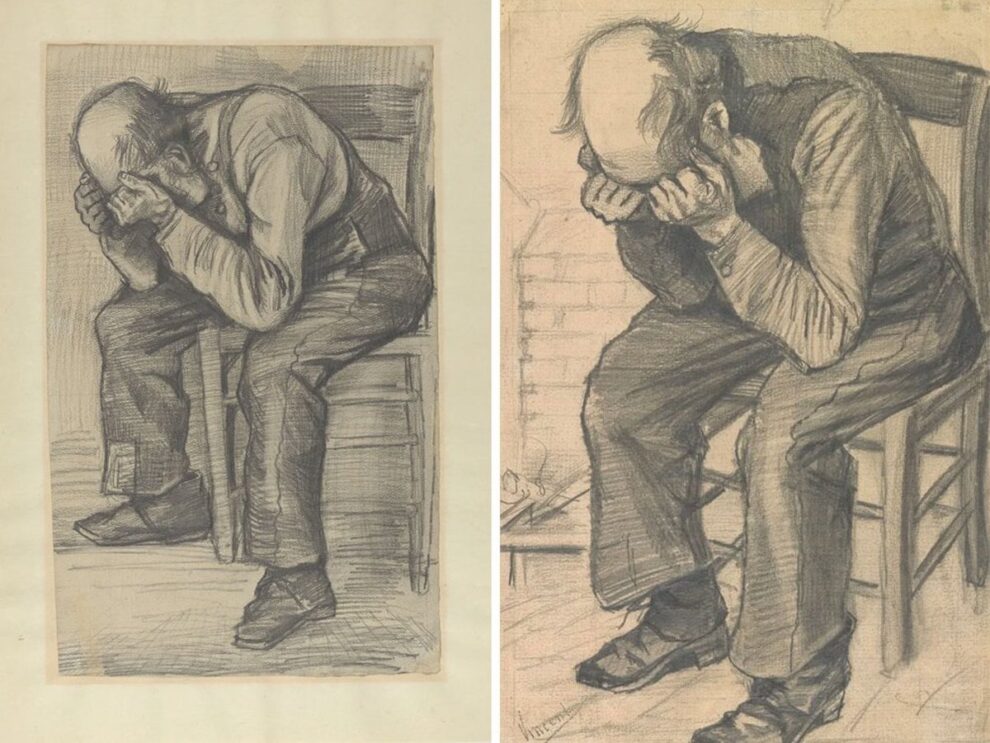 In 1882, Dutch artist Vincent van Gogh picked up his pencil and sketched out a drawing that would later become known as “Worn Out.” It shows an exhausted and balding man sat in a chair, seemingly in a deep state of despair. There are small but significant differences between the early sketch and the final drawing, including a shift in the perspective from which we see the unknown man. Somehow, that sketch ended up in the hands of a Dutch family who held onto it for years without ever realising its origins or its value. They do now – and the sketch is on display to the public for the first time.

Ironically for a man who went unappreciated during his lifetime and spent much of it in poverty, anything connected to van Gogh is worth a fortune today. His best-known works are priceless, but even a small sketch can be worth six or seven figures. Such is his fame that art historians have gone to extensive lengths over the years trying to track down everything he ever did, but it seems there will always be some that slip under the radar. One turns up every few years, and this is the latest. Its existence came as a total surprise to Emilie Gordenker, who runs the Van Gogh Museum in Amsterdam.

Validating and authenticating the small sketch wasn’t easy for the museum because van Gogh didn’t sign it. Scholar, researcher, and van Gogh expert Teio Meenendorp was called in to work on the project and was eventually able to definitively confirm it as a van Gogh in September 2021. The moment that was done, the sketch was back in the hands of the van Gogh museum, where it’s become the centerpiece of a new exhibition. Meenendorp’s forensic work revealed fascinating details about the picture. It was possible to prove that the artist used a carpenter’s pencil to sketch the drawing and then used unconventional methods to create light and shade. Lighter aspects of the drawing were rubbed with breadcrumbs, whereas darker tones were achieved by delicately going over the pencil lines with a mixture of milk and water.

While obtaining a precise date for the sketch is impossible, the museum’s experts are reasonably sure it was completed in or around November 1882. This idea comes from van Gogh’s private letters to his brother Theo, which are also in the museum’s collection. In those letters, he excitedly tells his brother that he’s working on a new piece called “Worn Out,” telling him about the “fine sight” that the image of an old working man makes. Like English artist LS Lowry, van Gogh was fond of drawing working-class figures and often chose them as subjects when sketching or painting people other than himself. The identity of the man in the picture is Adrianus Jacobus Zuyderland. Van Gogh likely found him in the Dutch Reformed Almshouse for Men and Women. The painter is known to have gone to the facility in The Hague repeatedly to offer its residents a small sum of money in return for agreeing to be drawn. Van Gogh noted to Theo that he intended to make a lithograph of the drawing, and it’s the lithograph that eventually became “Worn Out.” Zuyderland would go on to appear in a further forty known van Gogh sketches.

According to “The Art Newspaper,” the creation of “Worn Out” with its English title was part of an attempt by van Gogh to find employment at a publication in England. He never moved to England and never makes reference to this ambition again in future correspondence, so we can only guess at what might have happened. Either the great artist changed his mind, or the British publications he targeted joined the long list of people and institutions that failed to recognize the obvious value of his work. He was a mere 29 years old at the time and living with his partner Clasina Maria Hoornik in the Hague. She appears numerous times in his work, most notably in the lithograph he called “Sorrow,” which was also completed that year.

The full history of the development sketch is unknown, but it’s thought to have been with the family who took it to the museum for authentication since around 1910. What’s most surprising about the fact that they didn’t act earlier is that the sketch was eventually turned into a painting. Eight years after completing “Worn Out,” van Gogh produced a painting based on the work called “At Eternity’s Gate.” He made his subject older for the painting and also changed his dark suit for a lighter shade of blue. In this new depiction, the older man is waiting for death rather than exhausted from a long day of work. There’s also a burning fire in the painting that doesn’t appear in the sketches – an artistic choice that van Gogh made for unknown reasons. It was only after the painting appeared in the 2018 movie “At Eternity’s Gate” that the family finally realized that they might have a lost work of art on their hands and contacted the museum.

The sketch hasn’t been given a formal value and isn’t likely to receive one while it remains with the museum. However, the value of van Gogh’s work has never been higher. There are currently twenty different digital exhibitions of van Gogh’s work touring the United States of America and even more in the rest of the world. The artist is even conquering new digital frontiers long after his death, including an online slots game that features many of his most famous self-portraits and other works of art. As vaguely absurd as that idea might sound, the Dutch master isn’t the only famous artist to have their work used in this way. At last count, there are six different online slots that use the work of Leonardo da Vinci to appeal to players. The fact that great works of art can successfully be used in the marketing of online slots makes a mockery of the idea that art is an elitist or highbrow cultural topic – but we all knew that already!

It might not be true to say that the sketch alone is worth a visit to the museum in Amsterdam, but the rest of the collection certainly is if you’ve never seen it in the flesh before. If you’re heading to Europe in the near future, give it your consideration.