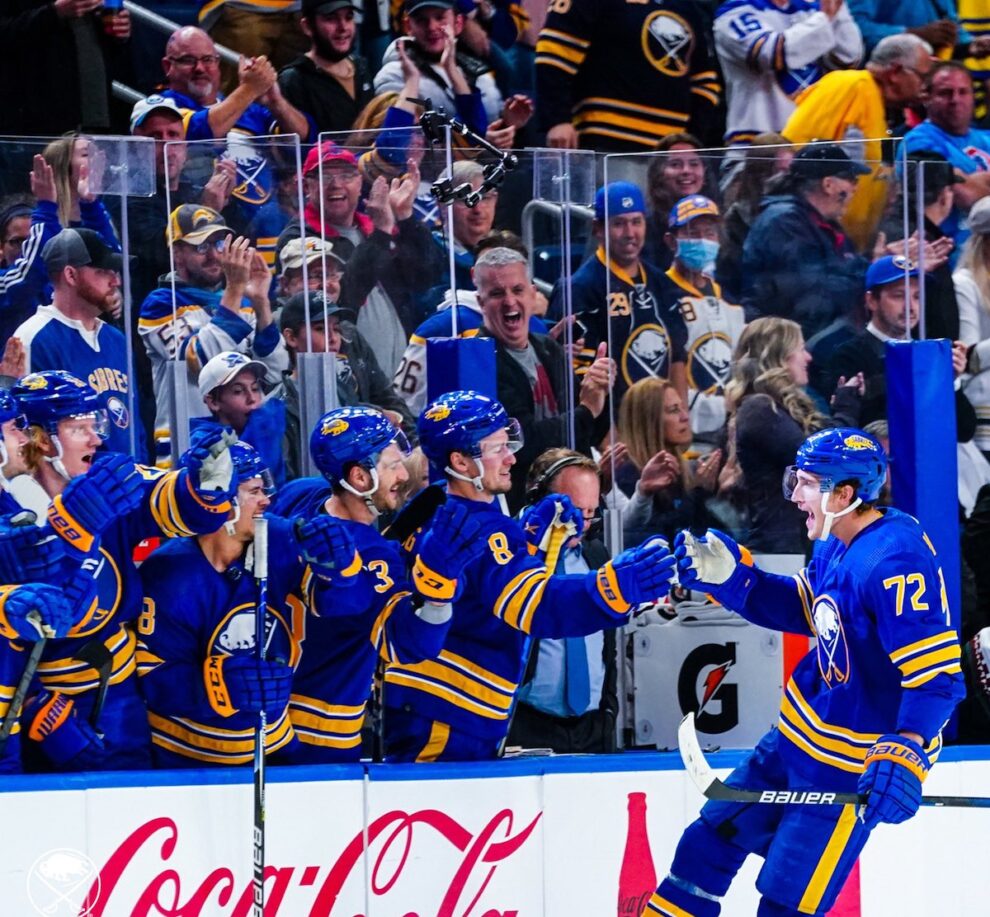 Having a roster sheet with a list of players was a must.

Drake Caggiula? Vinnie Hinostroza” Where the heck are Eichel and Reinhart!

So it was this past Thursday, as the Buffalo Sabres raised the curtain on the new season, the first coming out of the pandemic, playing last year’s Stanley Cup finalists the Montreal Canadiens.

After 10 seasons of no playoffs, of all the futility, the drama, the heartbreak, the fans have by now voted with their feet and their wallets. The arena was about half full, the days of 18.690 tickets sold and sellouts a distant memory. And with the Canadian border still closed but now scheduled to reopen to Canadians on November 8, the familiar sight of Habs fans clad in their rouge blue et blanc jerseys and cramming the corners of the 100 level seating bowl was noticeably absent.

What wasn’t absent were the full-throated fans, who created a sense of passion and energy that this building hasn’t seen in years. In fact the arena was so dead and quiet on most game nights in recent seasons the term “Key Bank Library” has been derisively coined to describe Buffalo’s game night experience.

The excitement was palpable right from the get go, with loud cheers for the team as they entered the ice, the biggest ovations reserved for familiar names such as Kyle Okposo, Casey Mittlestadt, Jeff Skinner and Rasmus Dahlin.  And the team did not disappoint, delivering bone-crushing hits, winning battles in the corners and controlling the tempo of play.  By the end of the first period it was 2-0 Sabres, thanks to goals by Kyle Okposo, who arguably had his best career game in a Sabres uniform, and Zemgus Girgensons, who hadn’t played a regular season game in almost two years. With the team not naming a captain to open the season, both these veterans were awarded the “A” on their uniforms as assistant captains and thus a leadership role on the squad.

5-1 Buffalo was the final, the outcome was a shocker for a team that some have labelled as an enhanced AHL roster. The Jack Eichel saga continues to resonate, the goalie tandem is a way past his prime guy coupled with a career minor leaguer, the roster is loaded with unknowns and roster castoffs from other teams, along with a cadre of promising young talent via the drafts, and the remaining veterans have had their stumbles during these years of futility.  Yet the fans in attendance were loving every minute of it.

To a man, each player interviewed lauded the sample fan presence and said it made a difference for the team. Goalie Craig Anderson said “That was an exciting building to be a part of. With it being half full, the energy that was there was outstanding. The fans were loud and proud tonight and it was awesome to be a part of that.”

“You could see the emotion on the ice, on the bench, in the crowd. We definitely drew energy tonight, off the fans. It was great to have them back in the building. It makes a huge difference.”, added forward Kyle Okposo.

The new look front office and game day crew was a contributing factor to an upgraded fan experience. Opening the festivities were two outstandingly produced videos, the first narrated by the legendary Rick Jeanneret, who will be calling his final season at the Sabres mic this year.  His words were a call to action to the new generation of Sabres players, to show some pride in the crest they wear as a Buffalo Sabre. It’s been a message that General Manager Kevyn Adams has repeatedly exhorted to the underperforming now mostly departed cast of players since he took over the job two years ago.

The Buffalo Sabres also commemorated the passing of three former Sabres this past year, Tom Kurvers, Fred Stanfield and Rene Robert. The tribute video to Robert was top-notch, and certainly a tear jerker to those old enough to have lived through that era of team history.

There were more small touches that made the arena experience a good one. Gone was the screeching and execrable horridness of DJ Milk, who among other things made it impossible to carry on a normal conversation in the seats (or in the pressbox) during pregame warmups and intermissions. Replacing him was a house band presenting very familiar music cuts. A drum band serenaded the fans, a new touch and the fans need to ramp up accompanying rhythmic clapping moving forward. Game breaks at the arena are at long last enjoyable again.

Longtime anthem singer Doug Allen goes to the dustbin of history, joining such past singing luminaries as Keisha Adamczak, Jennie Muckler and Ingrid Smolinska. Allen’s departure is via his refusal to get his COVID-19 vaccine, and KeyBank Center has been rightfully declared a vaccination only zone. Farewell, Doug. At least wear a mask and try to keep yourself healthy.

The arena was also abuzz with the unveiling of the entire rosters’ individual goal songs, which will be played whenever that player nets a goal. Gone is the default “Let Me Clear My Throat”, and the opening night winner was Andres Bjork’s goal, launching Prince’s “Let’s Go Crazy”. It’s still early, but at the moment that’s our clear leader.

“It’s just one game, now we prepare for the next one”, said head coach Don Granato. The next one came soon enough, a Saturday home matinee against the Arizona Coyotes. The Sabres are now 2-0 on the young season, winning this one 2-1 via shootout, with Artu Ruutsolainen getting the shootout winner.

Even with the fast start and fun opening week, nobody should expect anything but a bottom five finish. This is a young team that will endure some awful moments and some hiccups along the way.

But longtime fans can think back to the mid-90s. Ted Nolan’s “Hardest Working Team In Hockey” lost plenty of games and finished out of the playoffs in 1995 and 1996. Yet this group of scrappers battled hard and entertained and scraped every night and a community and fan base fell in love with that squad. In 1997 they won the division title, played an epic first-round playoff still remembered with an overtime thriller in game 7 against Ottawa. Two years later the Sabres were in the Stanley Cup finals.

This team, and this era, feel like that moment and that time in history. One can dream and hope.