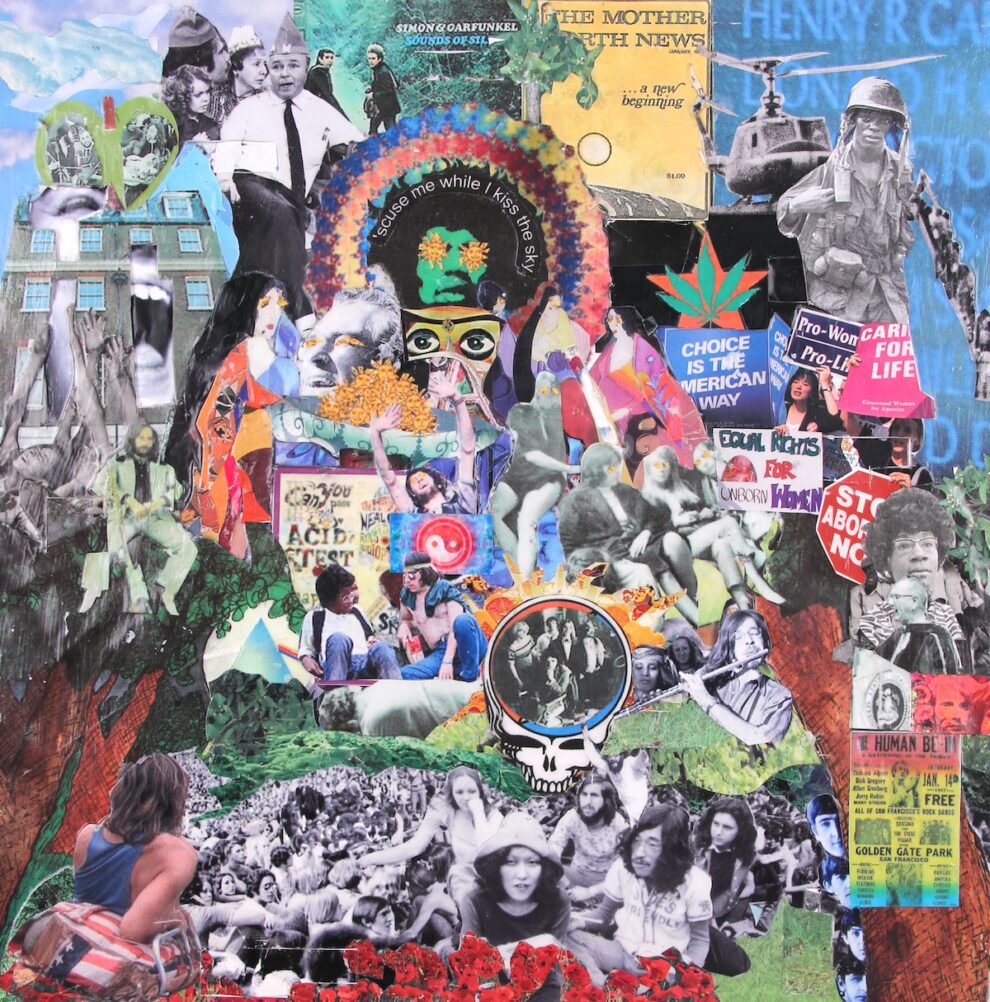 On August 15, 1969, a half million. long-haired. freaky people gathered in the mud for the Woodstock Music Festival in upstate New York. For some, the event symbolized the worst of American youth – dirty, drug-crazed dropouts, listening to the devil’s music, obsessed with free love, unwilling to take personal responsibility, spitting in the faces of hardworking law-abiding citizens who made this country great. And yet, if you look beyond the psychedelic veneer, if you listen to the slogans and lyrics of the day, if you consider what these idealistic young folks and millions like them actually did to further world peace and dismantle discrimination, you’ll see something different, something in short supply today – hope.

Who could believe preposterous ideas like love is all you need, we are everyday people, make love not war, open the doors of perception, and get back to the land? Who could be naïve enough to believe that flower power could overcome tanks and bombers? Or that nonviolence could overcome racism? Or that character is more important than money? Who could be idealistic enough to believe in Dr. King’s dream or America’s commitment to liberty and justice for all?

Today, both Left and Right seem to think that America is dying. The signs are everywhere, I’m told: racist police, the Deep State, the one-percent, Godless socialism, the Alt-Right, and, of course, a deadly virus. But compared to the 1960s and early ’70s, with the exception of the pandemic that has no precedent in the last 100 years, today’s problems don’t seem so bad.

War, hatred, injustice, poverty, riots, assassinations …we had it all in the 1960s and early ’70s. Fifty-eight thousand Americans died in a senseless immoral war. Millions of protesters filled the streets. Racial segregation ruled the land, and those who challenged it were beaten, jailed, and murdered. Birth control was immoral, abortion was illegal, and women were denied equal opportunity in education, employment, and finance. Homosexuality was illegal; gay marriage, an impossible dream. The Russians put missiles in Cuba and threatened to nuke us. Maniacs killed the President and his brother.

And yet, for those kids celebrating on that rainy August weekend, it was a joyous time to live. They believed then, as many of us do today, that a new age is dawning, an Aquarian Age of “mystic revelation and the mind’s true liberation,” an unprecedented epoch in which “peace will guide the planets and love will steer the stars.”

Personally, I missed Woodstock; but I got the message. When I saw my peers celebrating life and challenging the moral evils back in the day, I wanted to belong. I wanted to be part of something honest and true, something morally good and spiritually fulfilling. Like those at the Festival, I wanted to be an authentic pioneer of a new world built on love and understanding, a world where the generous outnumber the greedy, where opportunities belong to all, and people resolve their differences without killing each other. Folks who felt that way were called “hippies.” I got on the hippie bus in 1970 and never got off.

Of course, no one really knows what being a “hippie” means.  It’s not a label that we called ourselves but one that straighter folks commonly used to insult us. No one’s sure where the word originated. My favorite story is that Malcolm X invented the term to describe White dudes trying to act “hip,” but never quite making it.  There’s no hippie bible; no pledge to recite; no membership card to sign.  You don’t have to dress, talk, or act in any particular way. That’s the beauty of it!  It is what you think it is. You’re in when you say you are.  And yet, in my opinion, hippies were – and still are – united by a set of common values. We believe that love is the most powerful force in the universe, that peace is our highest purpose, that freedom of thought and action belongs to all, and that the accumulation of money is a dead-end.

Looking back, perhaps the hippies knew something worth remembering. Perhaps humanity is getting better, not worse. Worldwide, people are healthier, wealthier, and better educated today than ever before. In America, women have entered all professions, narrowed the pay gap, become half of all law and medical students, and attained positions of corporate and political leadership. People of color endure far less discrimination today than they did decades ago, and we’ve finally elected Black folks to our highest offices. Same-sex marriage is legal, and the LGBTQ community is freer, safer, and more accepted than any time in history.

Have we achieved that nirvana that hippies envisioned years ago?  Obviously not, but we’re heading in the right direction. Aquarius is not a place but a star that guides our journey. Hope is the fuel that sustains us. Call me naïve. Call me delusional. In Lennon’s words, “Call me a dreamer” But the hippie in me believes that the Age of Aquarius is unfolding as we speak and that the power of love is slowly and inextricably transforming the world into the happy family we were meant to be.

Stewart Rogers is the Co-Author/Editor of What Happened to the Hippies?, published by McFarland Press. He lives in Wilmington, NC, and can be reached at Stewart@WhatHappenedtotheHippies.com.