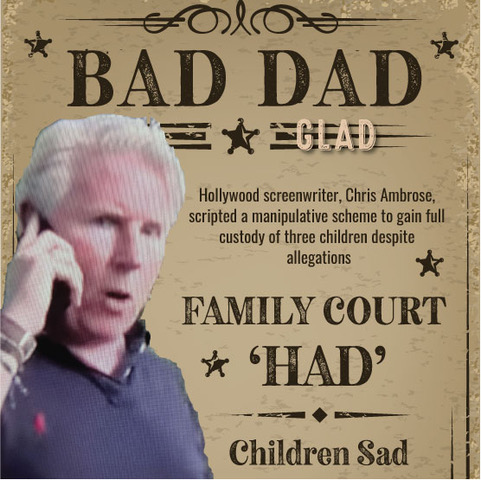 This is part one of a series on Chris Ambrose, Hollywood TV writer, and plagiarist, alleged sex abuser, who got full custody of three adopted children, as the mother was denied contact. As you shall see, there is far more to this story of a very strange custody decision in the Connecticut Family Court. Ambrose declined to respond to requests for an interview.

Child Abuse. That’s what this is.

A trial brief in Connecticut Family Court in connection with the custody of three children was filed on July 21, 2021, by attorney Nickola Cunha in which she alleges, “three children have been held captive and isolated from what they knew and understood life to be prior to April 24, 2020.”

Attorney Cunha added, “all three children [are isolated] from their mother…. are presently in crisis and said crisis for each child occurred while the children have been in the [father, Chris Ambrose’s] sole care and custody. This is supported by the evidence that two of the children have in engaged in self harming behavior that includes cutting to the extent by one of the children that it necessitated immediate medical intervention. One of the children experienced flareups of uncontrollable tics due to failure to ensure that child was receiving medication that he had been prescribed by a provider discharged immediately upon the transfer of custody from mother to father.”

The case is Ambrose versus Riordan, the venue Connecticut Family Court, in Middletown and Bridgeport.  The two, Chris Ambrose and Karen Riordan, are getting a divorce and they have been disputing custody.

The date, April 24, 2020, was the day they were removed from their mother and placed with their father.

Three children, on this date, then ages 13, 13, and 9, were taken away from their mother who raised them from infancy, by order of the Connecticut Family Court and placed with a man who they claim abuses and isolates them, not only from their mother, but from every other family member and friend they ever knew.

Mia, just before she was removed from her home with her mother in 2020

Matthew and Sawyer, on the last day they were with their mother in December 2020.

The three children have complained to anyone who would listen that they did not wish to live with their father.

The Multi Disciplinary Task Force at Yale New Haven Hospital on Jan. 26, 2021 found that the children made disclosures of sexual abuse by their father. At the Connecticut Children’s Hospital, on Dec. 2, 2020, the children also made disturbing disclosures.

These were ignored by the Connecticut Family Court.

Sawyer told Connecticut Children’s Hospital, “dad has been sexually abusing me for the last 7 months”.

Mia told Children’s Hospital  that “he touches my brother [Sawyer] and he really scares us. …[and] cuts us off [from seeing anyone.”

New Haven Yale reports Mia: “feels unsafe at home around dad, states dad fondling her breast.” and reported “youngest brother (10 yo) reported inappropriate touching (fondling penis) by dad. Mia says dad ‘tried to touch me’ but ‘I ran away’.  Also found concerning messages on dad’s phone, including: ‘dating apps’ where dad was ‘pretending to be someone else’…  Verbalizes being frightened that dad was going to cut off communication with others by ‘turning off internet.’”

“In my work with Matthew and his family, I have continuously noted that Matthew feels more connected and bonded with his mother. He has expressed that he feels that his mother takes his feelings and wishes more seriously. I believe that it is in his best interest psychologically to have a say in his custody arrangement.

“He is 13-years of age—an adolescent who is beginning to differentiate and try to find his own sense of identity. Being forced into a living situation that he feels is invalidating will be detrimental and, I believe, rather than facilitating a closer relationship, will only cause more animosity towards his father. I have had no reason to believe that Ms. Riordan, Matthew’s mother, is not “an adult who wants the child, who has had a continuous and affectionate relationship with him, and who is capable of raising him.”…

“Matthew is confused about why he ‘needs to stay with his dad’ ….  Matthew has reported panic attacks….   He said that his younger brother is even more frightened….  He has been very upset that his father was tape recording him and his siblings at the house. He described feeling that he has no privacy at his father’s house. His father removed the door knobs from the bedrooms so that the children could not lock the doors….

“He noted that his father worked a lot when he was younger and he has always been closer to his mother. He also worries about his youngest brother, whom he described as quite frightened by the sudden decision by the Court to have the children go live at his father’s house, without even being able to contact his mother to say goodnight.”

Matthew wrote to the court appointed psychologist, Jessica Biren-Caverly, about his dad, writing that “Mia, Sawyer and I tried to tell him what he has been doing, and he said that our facts were fake. He also ridiculed Sawyer when Sawyer didn’t want him to keep following him up the stairs.”

New Haven Yale reports “Matthew reports that he was brought to the ED because him and his siblings do not feel safe with their father.”

Children’s reports that Matthew told them “I’ve just been going through a lot for the past 220 days, that’s the time I’ve been with my Dad.”

“When asked if patient feels safe at home with Dad, ~he replies no.  When asked if he feels safe at home with Mom, he reports yes, denies having concerns about going home with Mom. When he is asked to tell us more about why he does not feel safe with Dad, he explains…  that Mia has been touched, ‘he will grab her thigh and squeeze” and Mia has told him about such as well. He describes witnessing Dad grabbing, hugging, and squeezing Sawyer in a way that seems ‘over excessive’ and ‘a little weird.’”

Judge Grossman Rules Children Must Go With Their Father

Family Court Judge Jane Grossman ordered the removal of three children living with their mother, to go to the home of their father, Chris Ambrose. She also ruled that the mother can have no contact with her children.

This is an astonishing ruling. And one seemingly quite contrary to the welfare of the children.

There is the diagnosis of the Court Appointed Psychologist, who spent about four hours with Karen interviewing her for the custody evaluation. Dr. Jessica Biren-Caverly wrote that Karen has an “unspecified personality disorder.”

There is a hostile divorce and custody dispute with the wealthier and famous father faring much better than the mother who left her job as a teacher 14 years ago to become a stay at home mom.

The father controls the marital assets which still total more than $1 million.

His career took a nosedive after he was caught plagiarizing two scripts from the TV show Bones to create one episode of Instinct called “Secrets and Lies”. He was immediately fired and has not worked since.

Ambrose admitted to Dr. Caverly in the custody evaluation report that “I did a stupid thing” and that it was “shameful” and “hugely
embarrassing” but Ambrose denies his agents dropped him because of this indiscretion.

After being unable to find work, Ambrose decided to be a stay at home dad and divorce Karen in 2019. He suggested Karen go back to work with the inference that she could pay him child support and alimony.

All three children were adopted when they were infants. Mia at five months, Matthew at 6 months, and Sawyer, a preemie, adopted at birth.

All three were placed in their adoptive mother, Karen’s loving care. She was the primary caretaker. She raised them, leaving her job of 17 years as a special education teacher in the Connecticut public schools to become a fulltime mother.

By order of Judge Grossman, the mother is not permitted to speak to her children.  The judge seemed to be working with the Guardian Ad Litem [GAL] for the children, Jocelyn Hurwitz Esq., and Jessica Biren-Caverly, the court-appointed psychologist, and Ambrose’s lawyer, Nancy Aldrich to get the result.

The GAL, Hurwitz, an attorney for the law firm of Cohen and Wolfe, has billed more than $175,000 for her work on the case. It may not be a coincidence that Ambrose controls the marital assets, and Hurwitz has consistently sided with him.

When you see more of the evidence against the father, you might conclude that money talks in Connecticut Family Court, in the courtroom of Judge Grossman.

The court-appointed psychologist, Dr. Biren-Caverly, works closely with the GAL. She has dismissed allegations of sexual abuse by the children and ignored the desires of the children to live with their mother.

Still, this might be concerning to some, for the children are Latino, but not for Dr. Caverly.

A judge, who never met the children, a high priced GAL, a psychologist who seems to tailor reports to the desires of the GAL, and their colleague, the father’s lawyer – these four women – made the arrangement and determination that the children should be deprived of their mother.

Christopher Alwin Ambrose, 59, is a lawyer who became a successful television producer and screenwriter with more than 100 credits on shows such as Law and Order, Harry’s Law, Judging Amy, Bones, Instinct, NCIS New Orleans, and more.

While Ambrose was pursuing his career, working in LA and NYC, the children were raised mostly in Connecticut, by their mother.

In a subsequent article we will explore more fully the allegations of pedophilia disclosed by the children against their father.

Sawyer alleged his father touched his penis and got in bed with him,. Mia said her father told her to commit suicide and touched her breasts. Mathew disclosed that his father secretly tape records him.

On Christmas day, when the children were confined to rooms without doorknobs.

After taking off the doorknobs, he promised the children that if they did not behave as desired, he would remove the doors.

Chris Ambrose has a hair fetish and adores selfies. He sometimes poses online as a barber, which he is not, sending sexually suggestive messages to young men about how he could improve their “lettuce” his name for their hair.

Here is a list of websites found on Ambrose’s two laptop computers by Computer IT Forensic Expert Donna Eno, of D. Eno Forensics:

When you read them, consider that his children are Latino.

He also likes the military. And loves to give the forced haircut.

There are many facets to this story. In telling it, in our multi part series, we may do more than shock your conscience. We may do more than gut-wrenchingly upset your sense of justice.  We will prove beyond a shadow of a doubt that the Connecticut Family Court system, in the hands of a monster, can be played like a fiddle.

But the tune is macabre.