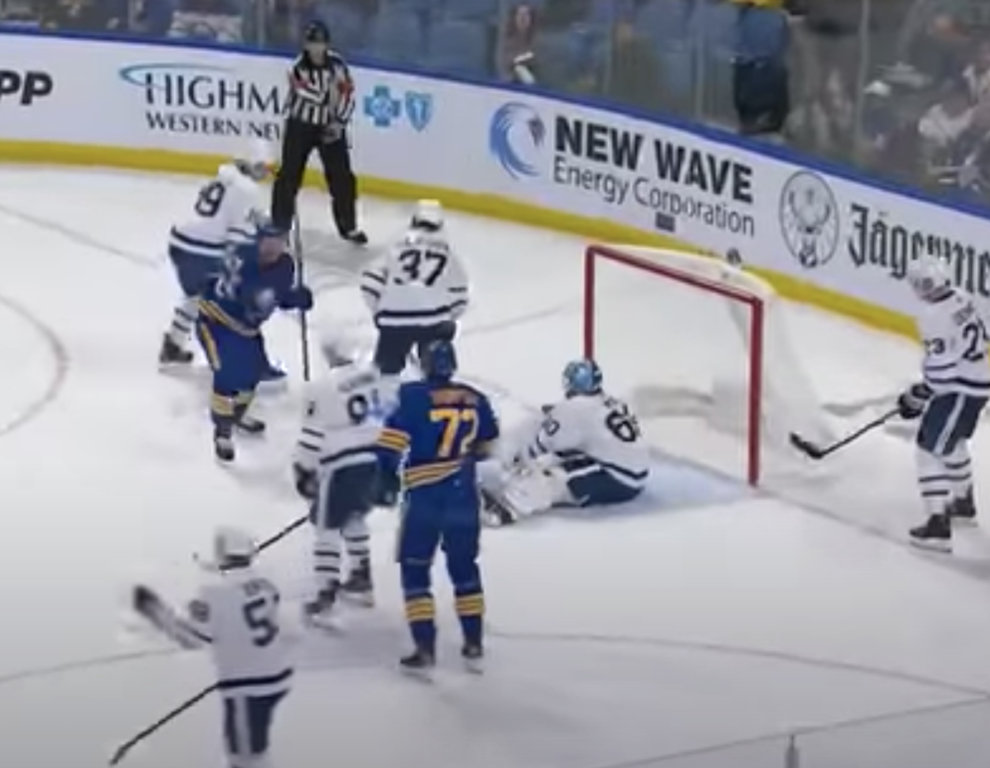 Teams face off before thousands of empty seats

It is an easy exercise to look at the impact of the still ongoing Covid-19 pandemic and its impact on our region through the lens of statistics and numbers.

The Public Bridge Authority cites lower numbers of cross-border travelers on the Peace Bridge.  Soon to be departing County Comptroller Stefan Mychajliw, when he actually shows up at his job to do a day’s work, issues a report on lower sales tax numbers due to the lack of cross-border shopping. Local health departments issue daily positivity rates and hospitalizations.

But for those paying attention, a truly alarming visual of Covid 19 hit home this past Saturday at KeyBank Center, when the Buffalo Sabres and Toronto Maple Leafs faced each other for the first time after a 20 month absence.

Just how intense is the Sabres and Leafs rivalry?

One has to go back to November 18, 1970, during the first season of the franchise’s existence in the National Hockey League. Buffalo Sabres coach Punch Imlach had been unceremoniously fired by the Leafs the previous year despite coaching their team to three Stanley Cup championships in the 1960s (their team has not won a Stanley Cup since). On that night, the Sabres were set to play the Leafs for the very first time, at the storied Maple Leaf Gardens, home of Imlach’s greatest triumphs.

The Sabres that year were a rag-tag group of rookies, castoffs, a starting goalie with a boatload of health issues, and an overall first-round draft pick named Gilbert Perreault who couldn’t speak a lick of English and yet would go on to become the face of the franchise. The Leafs were stacked, coming off years of success and championships.

It was an intense and surreal moment when the Sabres skated onto the ice in Toronto’s hockey palace. The packed house of Leafs fans gave Imlach a standing ovation which lasted through the playing of the anthems and several minutes into play. The expansion Sabres jumped on the energy in the building and demolished the Leafs 7-2. It was a statement win by the Sabres, only their 4th in their first 17 games played. But it would ignite a passionate rivalry between these two cities and their fan bases that has endured and thrived through the decades and has produced some of the more memorable moments and games in Sabres history.

In that first season, the teams would meet five more times, with three of those games at Memorial Auditorium. Buffalo would lose all three home games to the Leafs that year and in fact went 1-5 on the season, the only win coming at the historic first game.

With a pre-building expansion capacity of 10,429 patrons for hockey, a Sabres ticket would become a hot item, and the tradition of Toronto fans coming to Buffalo to cheer for their team, spar with blue and gold-clad Sabres fans, and spend time visiting our city began that season and has endured ever since.

Those who did show on Saturday witnessed another epic game, the Sabres would claw back from a two-goal deficit and got the building roaring, only to see the team lose 5-4, with Toronto getting a puck behind Sabres goaltender Aaron Dell on a weird shot that bounced off the crossbar, hit the ice and then dribbled past the goal line.

So what happened to all the fans?

Just eight home games into the season, the dismal attendance statistics are already becoming the fodder of much discussion. And derision. The Sabres have hemorrhaged an alarming 10,000 or so season ticket customers, long time patrons have voted with their feet, and their wallets, after a decade of failures and on ice futility. Ridiculous player salaries have become even more ridiculous, ticket prices have become untenable to the average fan, and add to that an arena experience which has a patron stepping into a shabby and dated facility which is dropping further in stature when compared to peer venues in the NHL and the NBA.

But certainly, the ship would be righted this past weekend, with back-to-back home games featuring the Edmonton Oilers and Toronto Maple Leafs, and their throngs of Canadian admirers.  Right? The United States had opened its borders to land travelers from Canada just the previous Monday. Canadians would only need to present proof of vaccination and would be eagerly welcomed into our country.

But here’s the rub, and it is all courtesy of the Canadian government.

The Canadian border has been opened to American land travelers since August. But it is really not all that simple. In order to enter Canada, one must first download an app, aptly titled “ArriveCan”. Then one must upload copies of travel credentials (enhanced license, passport, NEXUS card), proof of completed vaccination series, and enter the date, time and port of entry into Canada. Then… (and it’s a big then)… one must go get a Covid test. And not just a rapid test, but one of those more invasive, and sometimes costly, PCR tests.

Even after jumping through all those hoops, there is a slight possibility that Canadian customs will select a traveler for a secondary inspection, meaning yet another Covid test at the border crossing. And with that one must present a 14 day quarantine plan within Canada, or else agree to turn around and head home.

Still want to head over for some Swiss Chalet or Chinese food, a day trip to the Falls or some fun in Toronto? Didn’t think so.

For most Americans living here, free PCR Covid tests are readily available. Those tests must be taken within 72 hours of arrival at the Canadian border. So take your test, plead with those in charge that they turn it around in due time, then plan on calling the testing lab repeatedly the day before the scheduled trip to check on the status of the results. And hope for the best.

So when the border on the United States side opened last week, Canadians traveling here found out that this same ridiculous set of rules also applied to them. The app, the downloads, the uploads and most onerously, the testing.  Yes, Canadians could get their PCR test on their own soil, hop across the Peace Bridge to take in the Sabres game, and as long as they returned within the 72 hour testing window, they were good.

Otherwise, get a test here in the United States and wait for results. By the way, travel down Porter Avenue near the Peace Bridge entrance and you will see no fewer than three pop up testing sites offering PCR tests and a one-hour turnaround.  Some might say they provide a vital and needed service given the temporary set of circumstances. But by charging boxcar rates of $200 or more payable on the spot, others might call them opportunistic bottom feeders., preying on desperate Canadians who simply want to go home.

No wonder that the arena was so empty this past Friday and Saturday.

Local Congressman Brian Higgins has been a leading voice in trying to attain a full reopening of the USA-Canada border throughout much of the pandemic. He has coalesced his colleagues from both sides of the aisle who represent border communities. He has met and lobbied our case before the Canadian ambassador, members of Canada’s parliament, and local governments in border cities just across the bridges here in Western New York. He has pressured the Biden administration to do more.

A breakthrough in this standoff may be soon at hand. Dr. Theresa Tam, Canada’s Chief Medical Officer, along with numerous members of parliament and government officials have been in active discussion to modify or remove the testing requirement and allow all fully vaccinated Canadians (and Americans we assume) to cross the border back and forth freely.

This Thursday President Joe Biden is hosting Canada’s Prime Minister Justin Trudeau at the White House, the first face-to-face meeting between our two countries’ leaders since 2016. There will be plenty to talk about. November 21 is the next announcement day for the continuation or modification of the border crossing protocols.

Will the status of border crossing rules and restrictions also be on that White House agenda? One would think so.

Now back to this past weekend. There are some locals who find the presence of large contingents of Leaf’s fans in our city and trying to take over the vibe in our home arena, somewhat obnoxious and over the top. Even Sabres head coach quipped “I won’t miss them” when asked prior to Saturday’s game.

But here are some numbers that even a failed County Comptroller could do with his kid’s crayons… Let’s say that 5000 additional tickets would have sold to Canadian visitors this past Friday to watch Connor McDavid and the Oilers. Add an additional 10,000 potential patrons to Saturday’s Leafs game. Count up the lost revenue from the unsold tickets, the bars and restaurants that didn’t sell meals and drinks, the unused hotel rooms downtown and empty Airbnb accommodations throughout the city, and the cash registers that were ringing a bit less at the outlet stores and the Walden Galleria. The economic impact, without doubt, is a loss of millions of dollars to Buffalo and Western New York for these two games alone. To the Sabres. To the businesses and institutions that depend on this sort of trade for their existence. And all to prop up a bevy of Canadian inspired Coronavirus safety rules that in actuality don’t make anyone more safe.

The next Sabres/Leafs home game? The Leafs don’t return to KeyBank Center anymore this regular season, but their next “home” game between the two teams will actually take place on Sunday, March 13 at Hamilton’s Tim Hortons Field. This will be a marquee matchup outdoor game as part of the NHL’s annual Heritage Classic.

Many Buffalo fans will surely want to take part in this historic occasion, make the trip, and reignite the great Buffalo Toronto rivalry in a big way.

But not if there are still apps, uploads, downloads, PCR tests and quarantine plans in effect. Hopefully, common sense will prevail well before that date with relaxed border rules, and these two great teams and their eager fan bases can put on a show that will be epic.

Punch Imlach would certainly be proud.