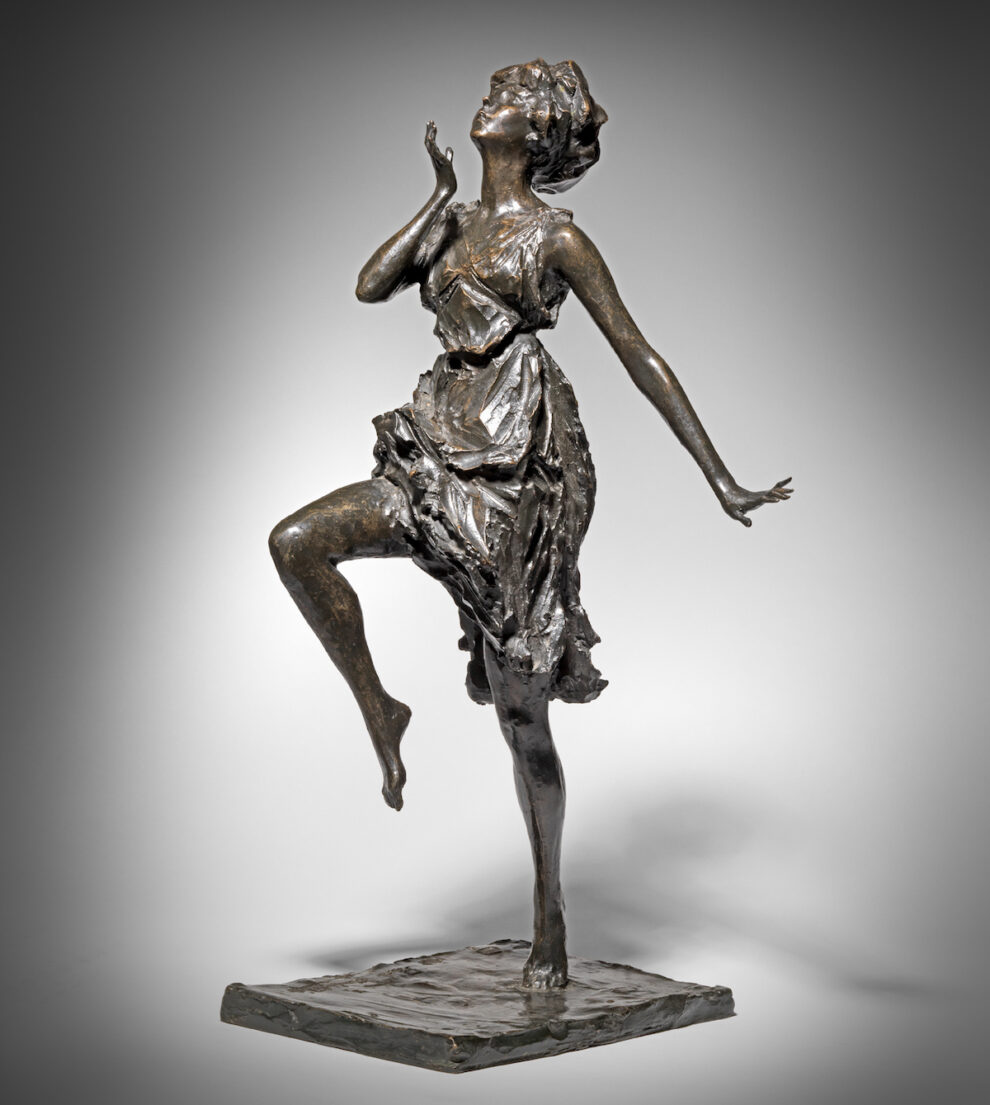 Troubetzkoy captured the international elite in his works over the late 19th and early 20th centuries.

Born to a Russian diplomat and an American opera singer, the renowned portraitist Prince Paul Troubetzkoy grew up near Italy’s Lake Maggiore and spent much of his professional life living in Paris, Moscow, and New York. This cultural backdrop informed his fascinating sculptures and other artistic works, which feature poets, artists, and socialites who became both his friends and the subjects of his portraits.

During his professional career, Troubetzkoy drew inspiration from pioneering sculptors like Giuseppe Grandi and Auguste Rodin (and Donato Barcaglia and Ernesto Bazzaro, who offered him an apprenticeship during his early career). He soon developed his own artistic style, which became prominent in the late 19th century. He modelled with fluidity and skill, crafting intimate portraits that soon made their mark on the art scene. His unconventional approach also caught the attention of the social elite, leading Troubetzkoy to develop a new concept: ‘the society portrait’.

In 1913, art critic Raffaello Giolli identified a grey-brown patina sculpture on a marble base as a portrait of Ernesto Consolo’s daughter. Consolo was a pianist who lived in Milan around the time that Troubetzkoy created this sculpture (1890-92). Though most of Troubetzkoy’s female subjects were nymph-like sitters who looked out into the world, this young, introverted sitter looks in, consumed by the crumpled cloth she holds. Here, Troubetzkoy’s acute eye for his subject’s posture, gesture, and gaze is apparent. The ‘Bronze Figure of a Child ’ sculpture is worth an estimated £5,000-£7,000.

Another of Troubetzkoy’s infamous sculptures depicts the Italian designer Carlo Bugatti (father of Rembrandt Bugatti, who Troubetzkoy also portrayed in a sculpture). Troubetzkoy created the model, ‘Carlo Bugatti[CM2] ’, in bronze and red-brown patina in 1899. In the sculpture, Bugatti stands in a formal pose, wearing his signature attire: high-waisted trousers, short suspenders, and a long coat. He dressed this way because of medical problems that prevented him from belting trousers at the waist. The slick cut and shape of the sculpture is representative of Troubetzkoy’s sculpting ability, particularly in the coat and hat. The sculpture is worth an estimated £30,000-£50,000.

Sergei Yulyevich Witte was an influential Russian statesman who was made a count when he negotiated a favourable end to the Russo-Japanese War. Troubetzkoy cast a bronze sculpture, ‘Portrait of the Minister of Finance Sergei Yulyevich Witte (1849-1915) With His Setter’, in 1901, at which point Witte was Russia’s Minister of Finance. The original sculpture, bronze with dark brown and black patina, has always been in the Troubetzkoy family and has therefore never appeared on the market. After Troubetzkoy’s brother inherited the sculpture, his grand-niece acquired it, and the sculpture has descended the family ever since. As a result, casts of this model are exceptionally rare: The State Russian Museum (St Petersburg) holds one, and other known casts have been exhibited at the Mir Iskusstva exhibition (St Petersburg) in 1902, the Salon d’Automne (Paris) in 1904, and the Art Institute of Chicago in 1912. This bronze cast is thought to be one of those exhibited sculptures and is worth an estimated £50,000-£70,000.

Troubetzkoy moved to Milan in 1884, the same year that composer Giacomo Puccini’s first opera was produced in Milan. They met through the local artistic community and became friends. Troubetzkoy likely sculpted this bronze and dark brown patina statuette of Puccini in around 1912. (At this time, he sculpted several musicians.) When Puccini died in 1924, Troubetzkoy was commissioned to create a statuette of him for La Scala. Troubetzkoy used his 1912 model to replicate Puccini’s features in the life-size commemorative statue, which is now based outside the Museo Puccini (Torre del Lago). Troubetzkoy’s bronze figures of Puccini are held in the Museo Teatrale alla Scala (Milan), Kirov’s Museum of Art (Kirov), and the San Diego Opera Guild (California). This sculpture, ‘Giacomo Puccini’[CM4] , is worth an estimated £35,000-£45,000.

5. ‘Portrait of a Seated Lady’

The ‘Portrait of a Seated Lady[CM5] ’ sculpture is archetypal of Troubetzkoy’s trademark statuettes. He created the society portrait of a seated woman in 1914. Though the seated lady’s pose was difficult to sculpt, particularly on a small scale, Troubetzkoy mastered the bronze and dark brown patina sculpture with confidence. The elegant model resembles Troubetzkoy’s well-known portrait of Marchesa Luisa Casati, which he created a year earlier. The Museo del Paesaggio (Verbania) holds a plaster version of the model. The bronze sculpture is worth an estimated £25,000-£35,000.

Troubetzkoy sculpted this patinated bronze model of Countess Tamara de Svirsky in 1920. The pianist and dancer performed around the world, working with composers like Igor Stravinsky and Edvard Grieg and dancers like Anna Pavlova. She met Troubetzkoy in Paris when he moved to France from Russia in 1905, and his portrait-statuette of her opened the door to his later success in America. He used a bravura modelling technique to capture de Svirsky’s vitality and spirit, recreating one of her barefoot performances. This rare cast is exemplary of Troubetzkoy’s mastery of technique, sensitivity to his subject, and imagination. The ‘Danseuse’ sculpture sold for £43,812 in 2019.

Athlete and suffragette Lady Constance Stewart Richardson was famous for forming a London dance troupe in 1913 that toured the U.S. until 1919. She was known for her sensational choreography, technique, and bare-legged costumes. Troubetzkoy sculpted this model, ‘A Bronze Figure of Lady Constance Stewart Richardson[CM7] ’, one of his most famous works, in 1923. The Detroit Institute of Fine Arts and The Metropolitan Museum of Art (New York) hold other examples of the model. This bronze with brown/green patina sculpture is worth an estimated £20,000-£30,000.

Another sculpture of Troubetzkoy’s, ‘Bust of Arturo Toscanini (1866-1957)[CM8] ’, is a plaster model of the legendary conductor Arturo Toscanini, who was one of the most celebrated musicians of his time. The Museo del Paesaggio holds the original plaster version of this work. The bronze Monument to Toscanini was based on the original plaster cast and was erected in the gardens of the Kursaal (Pallanza). On the other hand, this plaster model may have been cast after another bronze version and was acquired from Italian-born sculptor Victor Anthony De Meo’s American studio. Finished in 1925, it shows clear traces of Troubetzkoy’s tools and artistic skill and is worth an estimated £1,500-£2,000.

About James Drake and the Troubetzkoy Archive Project

In 2019, the progressive publisher Future Science Group teamed up with the Museo del Paesaggio to launch the Troubetzkoy Archive Project. Future Science Group’s chairman and founder James Drake initiated the collaboration, introducing his plans to develop an authoritative, central database of Troubetzkoy’s complete works to the museum. Two years on, as the database grows, the archive is set to become an invaluable resource for those studying — or simply appreciating — Troubetzkoy’s works. The archive may also become a blueprint for future databases that are dedicated to specific artists.