This is #14 of the Ambrose Papers, a series that covers an amazing injustice, an extraordinary caper of the ruthless kind, one that’s apparently common in Connecticut Family Court.  And the courtrooms of Judges Gerald Adelman and Jane Grossman.

I am talking about the gross and unwholesome decision to deny children access to their mother when the father pays enough money.

In the Ambrose case, based on nothing more than a report by psychologist, Dr. Jessica Biren Caverly, Judge Grossman decided that Karen Riordan must be separated from her children and full and exclusive custody be awarded to the long-absent father, Chris Ambrose, the subject of the series.

There was never any allegation of abuse against the mother. She has no criminal record and no diagnosis of any kind of any mental or physical unfitness. That is, not until she met Dr. Biren Caverly for a brief interview as part of a court ordered custody evaluation.

Dr. Caverly diagnosed Karen with an unspecified personality disorder and recommended that she should be denied all contact with her children, a decision the father, who paid Dr. Caverly, completely agreed with.

The children, Mia, 14, Matthew 14, and Sawyer, 11, all three adopted, all three Latino, and all three cared for all of their lives by their mother, Karen, want to live with her.

They hate living with their callous, conniving father, as they have told anyone who will listen. But no one listens.

The children claim that Ambrose abuses them. He calls them liars. However, the children say he is a liar. They refer to him not as dad or father, but as “P,” which does not stand for papa.

It stands for Pinocchio.

It doesn’t matter what they think. Not in Connecticut. Not in family court, not in the courtrooms of Grossman or Adelman.

The father has the money. He got it the easy way. After being fired from his high-paying work as a Hollywood screenwriter, because of plagiarism, he returned from Los Angeles to Connecticut where his wife and children lived for years without him.

He quietly transferred all the marital assets, and even Karen’s inheritance from her late mother, into accounts he controlled — more than $2 million. Then he filed for divorce.

On April 24, 2020, more than 18 months ago, Judge Grossman – accepting the recommendation of Dr. Biren Caverly, and seconded by the guardian ad litem, Jocelyn Hurwitz, also paid by the father – decided that the father should have complete custody of the children, children he did not raise and barely knew, and the mother, who raised them every day of their lives, was ordered not to have contact with them.

In broad daylight, the father stole the marital assets, retained a well connected lawyer, Nancy Aldrich, who in turn secured Hurwitz, and Caverly, who then opined that the mother should be prohibited from contact with her children. Judge Grossman approved it.

In the simplest, most blatant language: The father bought custody of the children.

Of course he had to pay. He paid Caverly around $20,000 for her report and testimony that the mother should never see her children.

All told Ambrose paid about $600,000 to purchase custody of his children. In so doing he avoided child support and alimony.

Because he was a high income earner, the cost is reasonable. He plans to take it out of his wife’s share of the marital assets anyway.

To date the court has never made him produce an accounting of how he has spent the marital assets or how much is left.

Ironically his lawyer, Aldrich, does not think a stay at home mother is entitled to any of the marital assets from a marriage of 14 years duration anyway.

She wrote to Karen’s attorney on June 4, 2020, “since she contributed zero dollars during the marriage from income, how does she think any money is set aside for her?”

Family Court Judge Jane Grossman ordered the removal of three happy children living with their mother, where they wanted to live, to the home of their estranged father.

Judge Grossman never met the children. She relied on the advice of their guardian, Jocelyn Hurwitz, who was paid by the father. 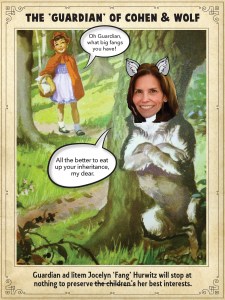 Downhill for the Children

After Ambrose got full custody on April 24, 2020, the children’s lives took a downward spiral.

For example, on Sept. 1, 2020, Mia and Sawyer reported sexual abuse by their father to medical professionals at Yale New Haven Hospital.

Mia said he touched her breast. Sawyer said his father touched his penis.

The guardian ad litem made extraordinary efforts to describe the children as liars and got them returned to the father without a forensic examination which was recommended by the hospital.

On December 2, 2020, Sawyer again disclosed that his father sexually abused him, this time to medical professionals at Connecticut Children’s Hospital. He also told his court-ordered therapist, Dr. Paul El-Fishawy about his father’s sexual abuse. Dr. El-FIshawy filed a report with the Connecticut Department of Children and Families [DCF].

At Children’s Hospital, all three children were found to have suicidal ideations. It was recommended they not be returned to the father.

The guardian ad litem, Hurwitz, made further, extraordinary efforts to describe the children as liars and got a court order to return the children to their father, without a forensic examination or any further psychological testing.

Hurwitz was paid $400 per hour by Ambrose for this outstanding work and for keeping the court misinformed about details of the matter.

Hurwitz, who may be disbarred when this is all said and done, through outright deception and multiple lies by omission, got the judge to sign an order requiring the children to go home to their father – immediately after they had reported sexual abuse.

The children were flabbergasted that, despite repeated cries for help, and candid disclosures that their father was sexually abusing them, that the father kept getting them back, punishing them for their disclosures and, evidently continuing to abuse them.

On January 26, 2021, Mia and Sawyer made yet another disclosure of sexual abuse to the Multidisciplinary Task Force – a task force comprised of members of the Madison Police Dept., DCF and Yale New Haven Hospital.

Sawyer also told his court appointed family therapist, Dr. Robert Horwitz and Dr. Biren Caverly, the custody evaluator, that his father would get into bed with him, despite his protests.  DCF recommended custody be taken from the father. DCF also reported that Sawyer began to engage in self-harm/cutting behaviors.

Mia, while with her mother.

Mia experienced unusual weight gain and was diagnosed with depression in August 2020, four months after being removed from her mother’s care. She did not attend school from February through June, 2021 because of depression.

Mia had been a good student when she lived with her mother. After living with her father, she failed classes in the 2nd trimester and failed every class for the 3rd trimester. She did not attend the summer school program.

For a time, out of sheer depression, Mia stopped showering. She wore the same, extra large blanket size pullover every day. She began cutting herself in July 2020. She continued to cut through January 2021.

In August 2021, after more than a year away from her mother, she ran away, leaving a note for her father that said, “I can’t take it anymore.”

She came to her mothers house.

Madison Police soon arrived. Mia told police that her father had told her, when she had expressed to him how depressed she was that she should “just kill herself.”

Police returned her to her father.

And so it stands today: All three children want to go home, home being wherever their mother is.

Be Safe Until We Come Home

I miss my mother so much,

the boys want to believe Frank.

They don’t know and

I love and miss my mother so much!

We aren’t giving up.

Like Mia, I have a poem of my own to offer:

The Worm Has Turned…

Mia and the boys can best believe

We will not stop till justice’s done

and their voices heard

and they are returned to their mother

away from their abusive father.

If I have to write one thousand stories

this injustice will not stand. It can’t

for all natural law is against it

and no amount of manmade law

can prevent truth from coming out.

These children are abused and prevented

from seeing their mother for no good no

The time of justice is coming.

The worm has turned and

it is not merely a worm

but a fire-breathing dragon.

(He only looked like a worm until he turned….)

In time he will consume

every corrupt official in all of Connecticut Family Court.

And the father, the villainous one, too

See the other posts in this ongoing series:

Ambrose #12: Hurwitz – the Wolf of Cohen and Wolf — ‘I’m the Guardian ad Litem; My Name Is Jocelyn Smite-em’