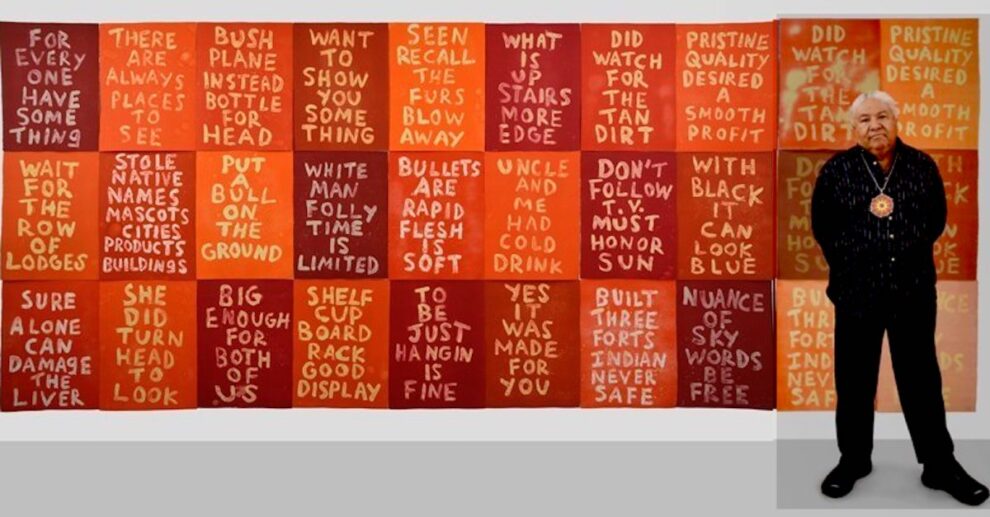 The Native Hosts project is an ongoing series of public art interventions that have been deployed throughout the United States and Canada for over 20 years.

These expressions of honoring indigenous citizens from communities both ancient and contemporary seek to educate the non-Native public as to what tribal grounds and histories they may be walking over and truly where everyone on the continent sleeps each night.

The reversal or backward treatment of the colonial names of states and provinces found on each Native Hosts panel is meant to turn around the state or province and their occupants to see this original Native world in a new manner.

Born in 1954 in Wichita, Kansas, Hock E Aye Vi Edgar Heap of Birds (Cheyenne and Arapaho Nation) is a multi-disciplinary artist, advocate, and educator. In addition to his professorship at the University of Oklahoma from 1988 to 2018, his artwork and words have raised awareness of Native history, modern-day controversies, and land acknowledgment for over forty years. Renowned for his Native Host signs, Heap of Birds utilized the public signage staple to vocalize and respect the land’s original inhabitants. He investigates different communication planes with rag paper monoprints, creating primary and ghost prints to dissect cultural perspectives.

A PLEA TO THE PEGULAS… BUILD IN BUFFALO
How Mobile Apps Can Help Artists to Grow?
Comment