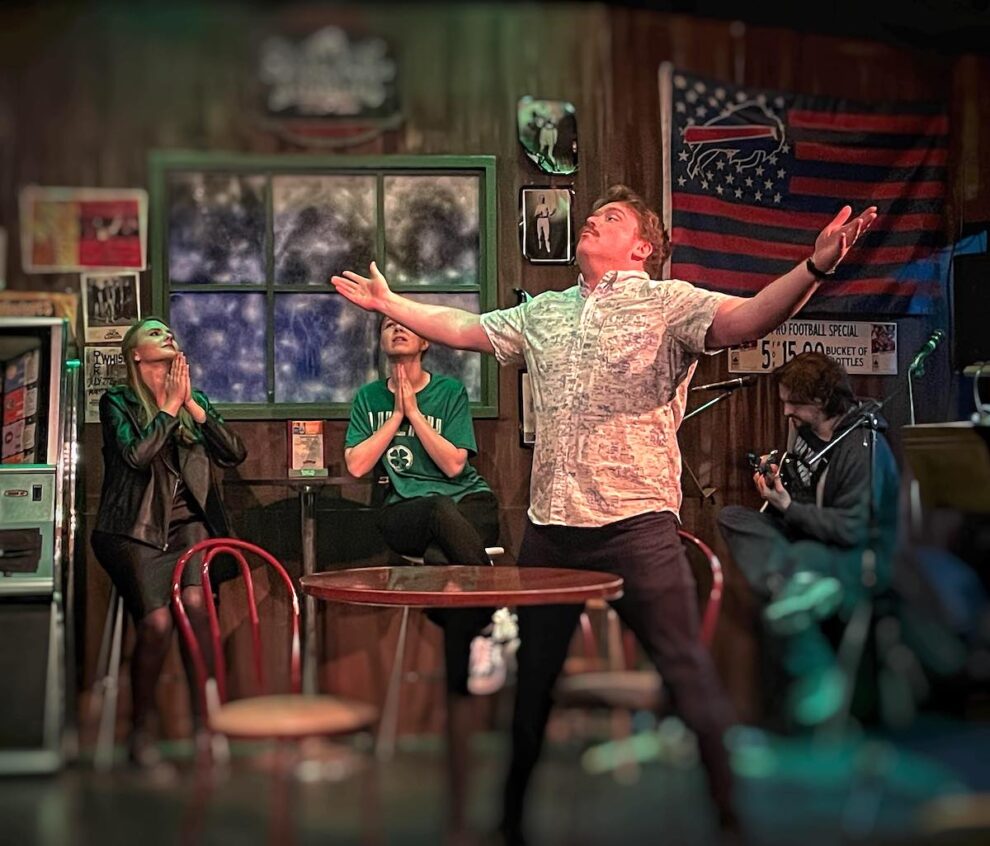 The American Repertory Theater of WNY continues to celebrate a season of regional playwrights with the one-act showcase “Fall from the Grace of God.” The one-acts are inspired by the music of Celtic/Punkers “The Pogues” with each intertwining in an “Our Town” meets Brendan Behan spirited narrative and theatrical structure that has all stories intertwining at a neighborhood dive, Martin’s Bar & Grille.

ART/WNY’s Artistic Director Matthew LaChiusa described the concept of the showcase as “having play within a play narrative highlighting individuals who are inhabiting this South Buffalo dive-bar.

Each character, from a runaway bride, to an ex-con, a wannabe kinky couple to a dead guy who doesn’t know it yet, tells their story as the bar patrons look on and share a pint or two in appreciation. Throughout the narrative, traditional music with some jiggin’ & reelin’, will move the evening along.”

The lineup of local playwrights and works includes John F Kennedy’s “Me Brother“, as the playwright pays homage to a lost brother, “Fairytale in NY” by Karen McDonald centers around an eccentric musician with a choice to make, Mark C Lloyd’s slap & tickle role-playing story “In a Dark and Dirty Bar“, James A Marzo’s runaway bride caught by a “A Rainy Night in Soho“, Jennifer Tromble’s sinister “Fall“, the sleight of hand artistry of TJ Snodgrass’ “Magic Hands“, the beat-poetry didactic of “When the Angels Won’t Receive Me” by Justin Karcher, the fairytale of South Buffalo “Love in a Time of Change” by Timothy Joyce, the irreverent farewell of a butter factory worker in Matthew LaChiusa’s “Petey’s Goodbye“, and Monish Bhattacharyya’s clever game of life or death in “Last Gambit“.

“I am a huge fan of the Irish rock and punk music genre. From the Pogues to The Dropkick Murpheys, and even catching Buffalo-based Jackdaw at the Mohawk, the music fires me up.” Said LaChiusa on what led to creating the showcase concept.

“What is so compelling with these bands is the narratives told through their music. Songs about blue-collar struggles, history, fights against inequality, and humanity told through lyrical poetry, is alone a great inspiration, but when taking a band like The Pogues, and their portfolio of music, the stories translate into great theater & storytelling.

The showcase is highlighted with songs by The Pogues and traditional Irish tunes under music direction by Susan King and “Dirty Old Band” members Robert Insana, Dan Schoeder, and Mark Humphrey. On what be appealing to theater goers about the “Fall from the Grace of God” showcase, LaChiusa concluded “the appeal is presenting 716 playwrights works in a creative structure as opposed to lights up/lights down 10-minute showcases doled out to local writers. Local playwrights deserve better. By providing a theme, or something that allows more subjective narrative not condensed to 10-minutes, then given full-production values, local playwrights’ works can be seen differently as opposed to works displayed in a non-linear, non-cohesive token showcases stuffed into a company’s season just to show community outreach in order to justify grants opportunities.”

American Repertory Theater of WNY continues the 2021-22 season policy of pay-what-you-can for the full production run. For more information on the production please visit www.artofwny.org or call 716-697-087

Show-dates and times are Thursday & Friday at 7:30 pm, and Saturday at 5 pm. American Repertory Theater of WNY requires patrons to show proof of vaccination and will request patrons remain masked while in attendance. Please call for reservations as seating is limited.