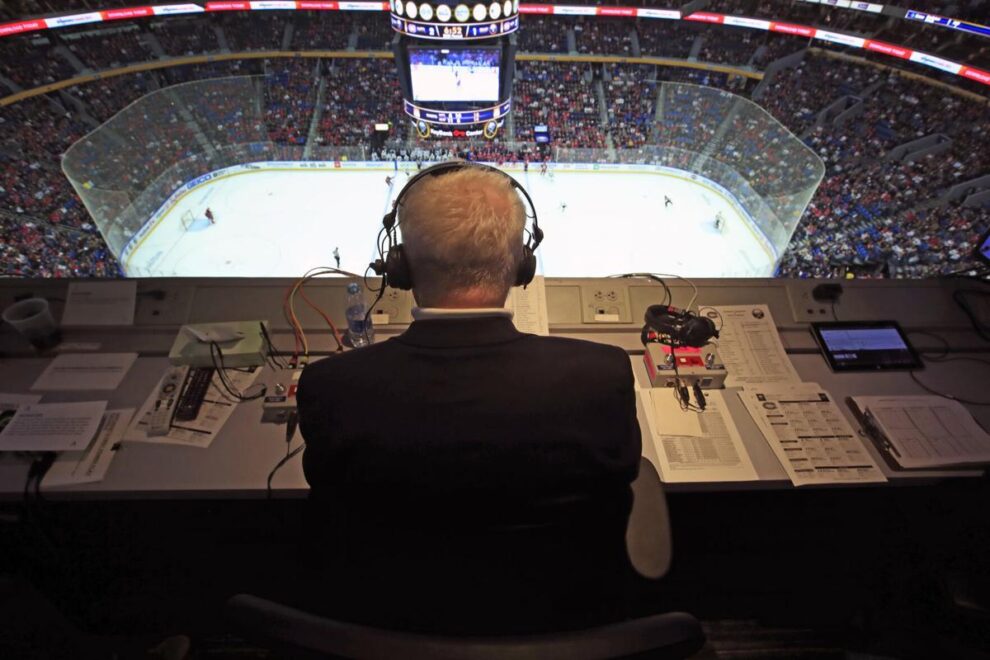 For anyone who was lucky enough to be in attendance this past weekend when the Buffalo Sabres honored their beloved “R.J.”, play-by-play announcer Rick Jeanneret, as he steps down from the broadcast booth after an astonishing 51-year run. You were part of something special.

The Buffalo Sabres nailed it. They gave Jeanneret a send-off that evoked memories and emotions, which have been cobbled together across a lifetime of fandom and participation in Buffalo’s beloved team. And this event could not have come at a better time for this beleaguered franchise, coming out of a pandemic season and a half, and a fan base that had been decimated via apathy and indifference thanks to a combination of factors.

Everyone knows who Rick Jeanneret is.  The calls are legendary.  Shout out phrases such as “Top shelf where Mama hides the cookies”. “La-la-la-la-la-laLafontaine”. “Now do you believe”. “Are you ready, Legion of Doom?”. “Wow Wee Housley”.  “Scary good”. Vintage calls. All part of Buffalo’s sports DNA. All reminisce of happy times and games and goals.

The 1993 playoff series against the Boston Bruins ended in a Sabres sweep and an overtime goal by Brad May. The call “May Day! May Day! May Day!” is about as notable and recognizable as any of the great ones, and videos of that time show May was being mobbed, first by goaltender Dominik Hasek, and the rest of his teammates. “To the day I go to my grave, that goal and that call will define me as who I am,” said May. May was one of over 30 alumni who were in attendance and on the ice as Jeanneret’s ceremony took place.

So. Does Rick Jeanneret actually sit at home, or in his office, and plan and rehearse such calls and such phrases? Perhaps have a cue card collection for just the right moment?

Jeanneret held court with the media during the first intermission at Friday’s game and quickly dismissed any notion that calls were preplanned. “Heck, Brad May hadn’t scored a goal in 18 games leading to that moment. Did you think anyone expected that to happen?”, Jeanneret quipped as he reminisced about the “May Day” call and that goal.

This is not the first time Jeanneret has been honored by the team. A decade ago he was inaugurated into the Buffalo Sabres Hall of Fame. He was then very clear that he was not to be called “The Voice of the Sabres”. “That title is forever bestowed to my friend and mentor Ted Darling,” said Jeanneret. Darling was the original play-by-play announcer for the team and eventually moved onto the television broadcasts, leaving the radio mic to Jeanneret. Darling eventually stepped down and retired mostly due to his health battles with dementia.  The press box at the arena is forever named in Darling’s honor and memory.

Jeanneret again paid homage to Darling, with members of Darling’s family on the dais. Team owners Terry Pegula and Kim Pegula were there as well, with Terry offering a truncated introduction, as his words were overwhelmed by fan applause.  He recognized all of his broadcast partners over the years, people who have had the honor of working alongside him during different eras of the team’s history. Jeanneret offered advice to anyone dreaming of a career in sports broadcasting. “Join a team as an intern and get experience. See if it’s the right fit for you this business can be grueling,” Jeanneret replied.

With all the great memories, the great games, the hundred of hockey players who wore the Sabres uniform, the hundreds of thousands of miles logged through endless travel, the millions of fans who were in attendance at arenas far and wide, and many more who watched an listened over the decades. There was one moment that eluded Jeanneret… the opportunity to call a Stanley Cup-clinching goal or final buzzer for his beloved Sabres.  “We came so close. Twice. But there’s nothing we can do about it now. Nothing anybody can do about it,” Jeanneret replied when asked if he ever thought about how that call would go down.

For the Buffalo Sabres, this seminal event is the centerpiece for what seems to be an emerging turning point for this stressed franchise. The team will end this season with its 11th consecutive non-trip to the playoffs, an NHL record. Season ticket membership is at low levels last seen during the bankruptcy era almost two decades ago. The ownership is under fire, and judging from fan reaction when they were introduced, have a lot of fence-mending to do with their fan base. In arena attendances early this season were at historic lows, not even experienced when the Sabres played in a smaller Memorial Auditorium that inaugural season in 1970-71 when capacity was at 10,429 seats.

“I’d be shocked if this team didn’t make the playoffs next season. I’m not saying Stanley Cup. Yet. But I’d truly be shocked,” said Jeanneret, who certainly has been around enough Sabres squads during his career to feel the temperature in the room.

The team has had its best March run since their playoff years over a decade ago. Dramatic wins in regular time, overtime, and shootouts. There is growing confidence in the room and a culture developing within the organization, which can not be discounted.

The days of $6 tickets on secondary sites are over. The Canadian border has finally been, for the most part, reopened after two years of Covid restrictions.  Fans are returning to the arena. The team is becoming hot again.

And in a final gesture to the great Rick Jeanneret, the Sabres put on a great night of hockey, beating the Nashville Predators 4-3, thanks to Dylan Cozen’s game-winning goal in the third period. The team held on for dear life in the waning final minute but was egged on by full-throated support of the packed house in attendance, chanting “Let’s Go Buffalo” and “RJ! RJ!” at every turn and wiling their team to victory.  “I can’t even imagine how nuts it will be here when we’re back in the playoffs,” said Alex Tuch, who along with teammate Cody Eakin guided Jeanneret back onto the ice for one final curtain call after the game, and an impromptu team photo, all reminiscent of a little league team capturing a league trophy.

“I have but three words for you,” said Jeanneret. “I love you.”

Rick, we love you back.  Thank you for a lifetime of service.

LEGAL NOTICE: Mother files claim against Judge Sharon LoVallo and county officials for taking her son from her.
How Has The Ukraine Invasion Affected Fuel Prices?