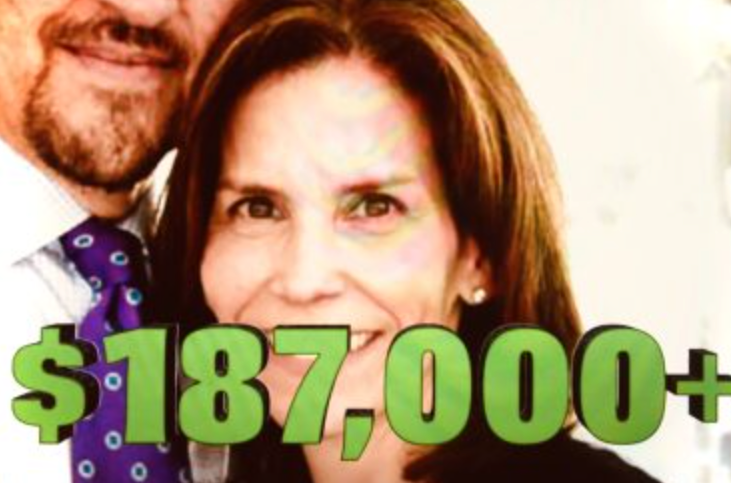 CT Family Court: The ‘Children’s Best Interest’ Is the Best Interest of Attorneys, Psychologists and the Wealthy, Abusive Parent Who Pays Them

That’s what the divorce and custody case of Chris Ambrose versus Karen Riordan is about.

Ambrose has had legal and physical custody of the couple’s three adopted Latino children since April 24, 2020.

On that date, almost two years ago, CT Family Court Judge Jane Grossman surprised the children and their stay-at-home mother, Riordan, by taking them from her and placing them with their father because the mother had alienated the children from their father.

They had lived with their mother all their lives.

In CT Family Court, it is common to transfer custody when the judge determines that the children do not have a good relationship with their father because the mother is alienating the children from him.

For this change of custody from the home the children want to live into the home of the estranged father, the father must establish that he has sufficient liquid assets to pay for the services of a guardian ad litem, an attorney who is appointed by the court to represent the best interests of the children, but who is explicitly not bound by the wishes or preferences of the children. The GAL is a trained expert in detecting parental alienation.

She will, in turn, retain an expert psychologist also trained in parental alienation to do a custody evaluation report to determine that the alienation is caused by the mother and not because the father is cruel or abusive to the children.

Judge Grossman’s decision that Riordan was alienating the children from Ambrose was informed by the guardian ad litem, Jocelyn Hurwitz, and the custody evaluator, Dr. Jessica Biren-Caverly. The latter interpreted the children’s fear of their father as the mother’s alienation.

Because Ambrose had seized the marital funds and taken Riordan’s inheritance, he was responsible for the payment to the GAL, and he paid her promptly along with the custody evaluator. It was her report that gave the go-ahead for the transference of custody.

The GAL and the custody evaluator were praised for their work by the judge. It was not unnoticed by the court that since Ambrose had taken possession of the marital assets to manage them properly, he had been generous in expanding the work of the GAL because he understood that experts should be permitted to do the job they needed to do to make accurate assessments of the cause of conflicts. Conversely, the mother objected to the expenditure of some $200,000 of the marital funds, which Ambrose controlled, to the GAL for her to determine whether parental alienation occurred.

The mother believed that the father was genuinely abusing the children.

So, in reality, there were two conflicts: Who was alienating the children from their father — the father by his abusive behavior or the mother who was training the children not to like their dad. And the second conflict was over the payments to the GAL and the custody evaluator, who would decide the first conflict.

Ambrose favored paying the GAL as much as she cared to bill at $400 per hour.

Riordan alienated the GAL by objecting to her simple request to bill more hours to investigate the conflict.

Since Ambrose controlled the money, he prevailed in both conflicts, for which the GAL, the custody evaluator, and his own attorney were grateful. Had the mother been in control of the money, they would not have earned a tenth of what they made in this case.

And the judge recognized the experts’ work in determining that Riordan was to blame for the alienation of the children and their father.

Ambrose is to be credited by those who work and wish to get paid. He paid the experts with his wife and his money, something they understood and appreciated, which further showed the experts that they were right in advising the court that he was the right parent for the children.

After hearing all this from the experts, Judge Grossman ordered the children to have no contact with their mother.

In CT, the Family Court judges often find that when one parent is affluent and has control of the money, it is better that he has custody of the children and remove the contentious mother and her distractions from his and the children’s life.

It has been effective, and experts like the GAL Hurwitz and the custody evaluator, Caverly, are now in constant demand by family law attorneys who represent affluent fathers to help secure exclusive custody for the father and remove the mother from the children’s lives.

When the three children were removed from their home, they were 13, 13, and 9, too young to comprehend the wisdom of the judge, her court-appointed guardian, and the custody evaluator whom they had met twice.

At their ages, they could not understand why they should not be with the woman who had been their primary attachment figure, who gave them every day of her life for the last 13 years, their mother.

Because they did not understand the judge’s wisdom, perhaps because the judge had never met them, the children became desperate to contact their mother.

The father had to take their phones and internet away so that they might not contact her secretly and therefore not follow the judge’s orders, which she had determined to be in their best interest.

As part of his adherence to the judge’s orders, Ambrose cut off contact with people besides the mother. He had to prevent the children from seeing their mother’s family and friends, who had made up much of their world – for the father had been away when the children were growing up.

Ambrose had to work closely with the court and the experts he paid to prevent the children from having contact with their grandfather, grandmother, aunts, cousins, and all the friends they used to know. He had to do this, for if the children saw these relatives, their mother might come around, and they might have contact with her or be reminded of her, which made them sad.

In consideration of this, Ambrose moved the children to a remote rural home and sequestered them.

Following allegations by the children of sexual abuse by their father, police came and removed them. They were examined at Yale-New Haven and Connecticut Children’s Hospital on another occasion. Forensic evaluations were recommended, and the Dept of Children and Families began an investigation, placing a 96-hour hold on returning the children to their father.

The GAL Hurwitz intervened, and, with the aid of Dr. Biren-Caverly, who released her custody report to police and DCF, they slowed down the investigation long enough to get a court order from Judge Grossman requiring the children be immediately returned to their father, in contravention to the 96-hour hold.

Hurwitz assured the judge that the children made up the abuse allegations to get away from their father and return to their mother.

With the investigation halted, Ambrose was not subjected to being questioned about why the children said he tried to sleep in the same bed with his son, why he touched them inappropriately or took the doorknobs off their bedrooms so they could not lock him out at night when they were sleeping, and why he had hidden recording devices and cameras in the house and what he did with the film.

If the investigation had continued, Ambrose might have been accused of something criminal and lost custody of the children. Then he would not be able to obey court orders and keep the no contact with the children and their mother, which the experts, Dr. Biren-Caverly and attorney Hurwitz said was in their best interest.

As for one of the websites, Latino Boiz, Ambrose assured Dr. Biren-Caverly that the nude male models are not children.

The website is known to use models who appear to be underage but are older than 18. They have a name for these unique childlike models –“twinks.”

The website presents various scenarios of fathers raping their sons and introducing them to sex before they reach the age of consent. Ambrose assured Dr. Biren-Caverly that the older men who perform various acts in the videos found on the website are not the actual fathers of the twinks.

Dr. Biren-Caverly, who, it might be noted, was paid by the father, so she knew he was a dependable and truthful man, was retained to make an unbiased report on who should get custody of the children, mother or father.

Still, it was a close call. If CT Family Court was not dedicated to the children’s best interest, they might have put the children in contact with their mother out of fear that the children’s allegations were true and that he is a menace and a danger to them.

Ambrose’s lawyer, Nancy Aldrich, who knows the judge well, persuaded Judge Grossman to force Riordan to return the computers and order a complete halt to the planned forensic examination, which might embarrass the father further.

The list of websites found on Ambrose’s laptops, as examined by Computer IT forensic expert Donna Eno of D. Eno Forensics, only establishes he visited certain websites and downloaded photos such as these:

The forensic expert felt that there was more, but it was deemed in the children’s best interest not to probe this further.

It should be noted, if it has not been already, that Ambrose pays the GAL Hurwitz and the custody evaluator, Dr. Biren-Caverly, to protect the children’s best interest. They, in turn, assured the court that they are not influenced by the fact that Ambrose has the money and the wife has none.

To compensate for the trouble and expense he incurred to establish the children’s best interest, Ambrose did not pay his wife any spousal support. He took possession of the marital assets right before filing for divorce, and the court chose not to order him to give her half. This made sense since the custody evaluator, the GAL, and Ambrose’s attorney got her half of the marital assets, about 1 million dollars.

This investment – of paying the experts and not his wife her share of the marital assets led the good Judge Grossman to determine, with the help of the experts, that the children should have no contact with their mother.

Since she does not spend time with the children, Riordan does not need the remaining money.