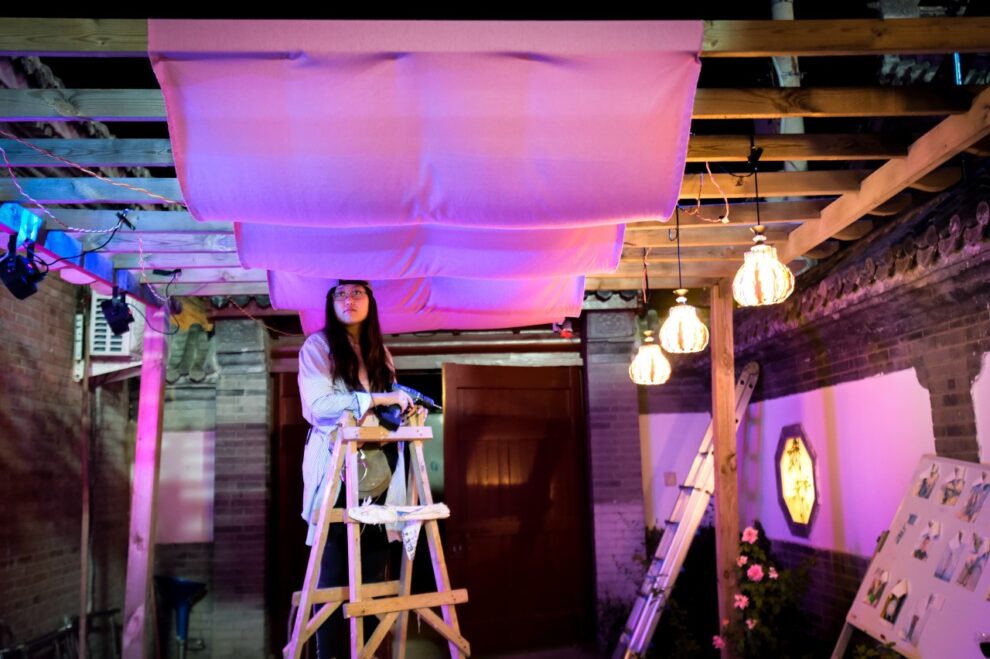 I sat down with talented Production Designer, Angran Li, as she discussed her most recent Disney Shortfilm, her journey into the film space, and her time working in virtual production design. Angran has a passion for visual storytelling, and she brought us into her unique creative process by touching on workflow, previsualization, and more. Born in Beijing, Angran began her career by working on the 2016 NYFW and holds a BFA in interior design from Parsons. In our interview, we spoke about her recent work for Disney’s The Little Prince(ss), how to balance storylines, and the creative freedom at production design offers her.

Please tell us a little about your journey into production design and your current industry.

I recently had many colleagues tell me that I’m really on a fast journey to get into the current film industry and be where I am. They told me they wished they’d found a way in when they were my age, though I always believe that the best time to plant a tree is either ten years ago or right now. I think the world is different now, but it’s really important to me to know what I want to do as a goal so I make decisions toward it.

In your recent work for Disney’s The Little Prince(ss), was there a key prop or visual that you think elevated the story and enhanced the audience’s understanding of the main character Gabriel?

Gabriel is very hard to achieve as a character in The Little Prince(ss) because when kids are at that age their identification is not fully set yet. I would say it’s more like the world around Gabriel elevated the story and enhanced the audience. If we look at the environment, Gabriel will pop up in almost all the scenes.

With the rest of the kids, with public space, around adults, kids in school. It’s not only because we framed Gabriel at the center of each frame, it’s also because we addressed Gabriel in a way that is just unique. We were trying to figure out a way to set a special look for the character. We wanted to make sure that we conveyed the idea that each individual in the world is all figuring out who they are and who they want to be while they are living each day.

With The Little Prince(ss), the short film delved into some more serious content than a typical Disney film. What was your role like balancing the environment to appeal to children while also aligning with the more serious storyline?

I think I mentioned some ideas behind the scenes while designing the world. I watch a lot of Miyazaki’s films, and storyboards and I watched all of the documentaries of him telling the stories through his films. When he designs his characters he looks at children a lot and tries to understand their actions, motivations, and how they see the world. I worked on a lot of stories in recent years where our cast was children. I was able to see props, art, and sets that are like their own space and it has to be real to them. Our actor who played Rob, was saying to Moxie on set, “how am I going to do homework when there’s no homework on my table. Didn’t I just get off from school?” so my prop master and I went to him and said, “because you just got off of school, your homework from school is still in your backpack.” And he took it out, no longer confused about his actions.

When we dressed the set and environment for this film we didn’t just dress it for the camera only, because our leads are children so the easiest and quickest way to fit them into the world for the story is make the space their space. I don’t consider it a film for children because parents and adults watch it as well. And they will think about their life when they were kids, not really about their kid’s life. It’s objective in my opinion, cause I feel I don’t think about another person until I finish thinking about my own self. This could just be me, but that’s how I developed the look of it.

About Disney films: I think it’s shifting at the moment, I never really heard about Disney movies as a type of movie before I moved to America. I loved a lot of animations Disney produced, when I was a kid I watched Lion King so many times, singing the songs of it for a very long time, it just stuck in my head. I think when I watched it as a kid I didn’t pay so much attention to some of the more serious content, cause I didn’t even know what was serious and what’s content. I only started to discern those when I grew up and heard people talk about them.

In my mind, I consider Disney a studio that makes films, and this is the story Disney approved us as filmmakers to tell through their platform, so I think that’s how I see it. And I recently just wrapped on another Disney project; I’ve been on it for over a year. I think it really depends on who the filmmaker is to make decisions to define what the story they are telling to let the world think what a Disney movie is nowadays.

I know that you have recently ventured into the virtual production design space. How has that differed from your previous work?

I would say it’s two different worlds, but the approach is still all towards achieving the story and look. I found it very challenging to work in both the Art Department and Virtual Art Department. I think the skills in Art dep and VAD are very identical, but an Art Director who’s capable of understanding the VFX pipeline would be able to understand the structure of VAD very easily. It’s definitely hard to do, but with technology moving so fast nowadays, it’s a process I have to go through. It’s probably better to go through now than later. The two worlds have their own design languages, speed of workflows, skill sets and costs are all different. To me, it’s definitely a learning curve compressed within a short amount of time to catch up with the speed of Virtual Production.

What do you like about the creative freedom that virtual production gives you in your craft?

I think it is: previsualization, it doesn’t matter if it’s Unreal Engine or Unity or Maya or what program will come up in the future to do virtual productions. It’s more like virtual production gives pre-production freedom to previsualize what could work or doesn’t work before it’s too late for VFX. It’s a better control for the visual-based department in entertainment such as Art Dep, Set Dec, Camera, Grip, etc. It gave the idea out so it buys more time to design the vision.

What has been one of the challenging yet rewarding aspects of entering this new space in the field?

I will say, it’s probably the mindset up for the terminology and the need to get the work done on time. I think from time to time, the Art Department structure is very well constructed. I think it’s a working process for every production to find their own way to work with virtual sets. It will have a different workflow that fits their production. It’s still very much a work in progress from my point of view.

And finally, how can we connect with you to keep up with your future work and endeavors?

Please reach out to my Website or Instagram, I’m mostly active online for both of those two places.

Thanks for reading! You can find more about Angran and her work by checking out her IMDb page.

What Disease Can Cause You to Forget Your Loved Ones and How Can You Deal With It?
CLOSING THIS WEEKEND Alleyway Theatre BERSERKER closes April 23