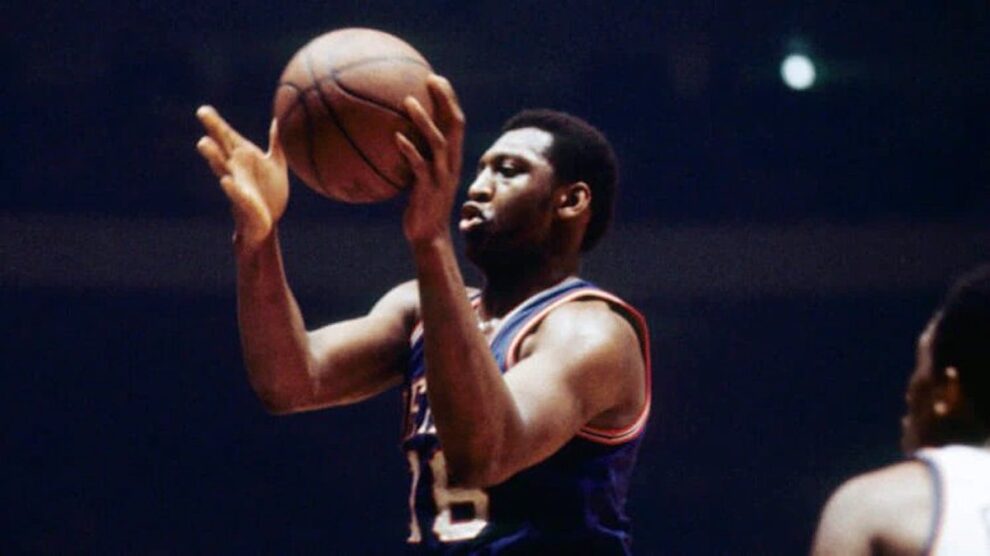 Bob Lanier is Buffalo’s best basketball player to ever come out of the Buffalo area, bar none. Any discussion to the contrary is pointless and usually unsubstantiated.

Throughout his college career at St. Bonaventure University in nearby Olean, New York, and in his professional career with the Detroit Pistons and Milwaukee Bucks, Lanier made his indelible mark as a great talent of the game and was eventually inducted into the Greater Buffalo Sports Hall of Fame (1991), NBA Hall of Fame (1992), and College Hall of Fame (2006).

Lanier’s great basketball prowess blossomed in his college years, and his talents were highly sought after by NBA and ABA teams: Lanier took up a lot of space under the basket, and he dominated the middle on defense. On offense, Lanier brandished an uncanny and beautiful, left-handed hook shot with an incredibly soft touch, scoring with a range of up to 15 feet; sometimes, his graceful, left-handed hook shot appeared to be unstoppable.

Lanier proved to be the hottest prospect of the 1970 NBA draft, chosen by the Pistons as the first pick overall that year. The Pistons would not be disappointed; Lanier would go on to score 15,488 points and grab 8,063 rebounds in his nine-and-a-half years with the club.

Lanier would go on to play another four-and-a-half years with the Bucks, until his retirement in 1984.

Before his eventual retirement, the eight-time NBA all-star would roll up 19,248 points (12th of the all-time NBA scoring list) and grab 9,698 rebounds during his illustrious 14-year career. Lanier’s number, 16, has been retired by the Pistons’ and Bucks’ organization.

At St. Bonaventure University in his college playing career, Lanier averaged 27.5 points and 15.7 rebounds per game throughout his playing career – both all-time school records. He was named Second Team All-America in his sophomore year and First Team All-America in his junior and senior years. Lanier’s brilliant career at St. Bonaventure culminated with the retirement of his number, 31, by the University at the end of senior year.

After a very successful junior year, Lanier was approached by the ABA’s New Jersey Nets, who offered him $1.2 million to join the team. Following his father’s advice, Lanier chose to remain in school and play his senior year at St. Bonaventure where the entire college sports world would closely watch his stardom grow the following year.

In his standout senior year, Lanier averaged 29.2 points and 16 rebounds per game at St. Bonaventure, finishing the 169-70 regular season with a 25-1 record (with the only loss at Villanova, (64 to 62) and a number three national ranking.

However, Lanier injured his knee near the end of the regional championship game in a collision with Villanova’s Chris Ford. It was severe enough that he couldn’t play in the Final Four, and it eventually required surgery; the first of eight surgeries on Lanier’s knees.

Lanier ended his college career at St. Bonaventure as the leading scorer all-time with 2.067 points; he is now ranked third. He graduated in 1970 from St. Bonaventure with a Bachelor’s degree in business administration.

St. Bonaventure Coach Larry Wiese, at age 81, reflected on the magical ride of that most memorable 1969-70 season: “It was a magical moment in our lives, no question. In our hearts, we knew we were good enough to win the national championship.”

Lanier’s early years at Bennett High School were awkward for him as a 14-year old with unusual physical size (i.e. six-foot, eight-inches in height), coming from one of Buffalo’s poorest neighborhoods and feeling out of place; he later told the Buffalo News: “I remember my first day of high school. To me, it seemed like the biggest building in the world, and there were so many people. It gave me a feeling of inadequacy because the kids had nice clothes. They wore khaki pants and penny loafers, and I didn’t have that stuff.”

In later years, Lanier would be interviewed by Ira Berkow of the New York Times (on April 6, 1981), expounding on his difficulties as a teenager: “I grew big fast as a kid. I always felt awkward. Normal clothes didn’t fit. I’d have to wear sloppy, big man’s clothes. I’d go to a party and stand in the corner and wouldn’t dance because I thought everyone was staring at me.”

To make matters worse and most disheartening, Coach Nick Mogavero would cut young Lanier from the varsity team in his sophomore year, saying later that Lanier was too clumsy and was worried about his safety on the basketball court. Lanier then joined a Boys’ Club, and unknowingly, greater and more glorious days were ahead of him.

Playing basketball was Lanier’s first love. Lanier painfully recalled how the neighborhood kids giggled whenever he tried to shoot or dribble the basketball; now he was discouraged and depressed.

Then, a special man entered the disheartened kid’s life – Lorrie Alexander, the director of the Masten Boys’ Club, and teenage Lanier’s life would change forever.

“Alexander saw something in the boy. He took the boy under his wing, becoming his personal martinet. He worked with him in private – out of the sight of the giggling kids. Night after night, for more than two years, Alexander cleared the kids out of the Boys’ Club at closing time, 9 pm. Then, he locked the door from the inside and put the boy through the Alexander regimen,” insightfully writes Phil Ranallo, a sports columnist for the Buffalo’s Courier Express (on March 26, 1970).

“The boy barely touched a basketball during those nightly sessions. Under Alexander’s watchful eye, he worked with weights to strengthen his arms and leg muscles. He climbed ropes. He crawled on the gym floor, first on his stomach, then on all fours,” writes Ranallo. “The sweaty sessions were not wasted. The boy progressed slowly. He became less clumsy. He gained a measure of confidence. He began to dream his dream again. The boy was on his way.”

Fast forwarding to his junior year, a determined and retooled Lanier tried out again, and this time around, he made the varsity team to his long-awaited satisfaction and delight, pleasing his proud parents, Robert Sr. and Nannette Lanier of Buffalo. Lanier was now more equipped with more tools and a fiery confidence: He was mentally and physically ready to take on the challenge of varsity basketball, and he answered the call with flying colors to almost everyone’s amazement. Lanier averaged 21.5 points per game for Bennett HS and was named to the All-City team.

In his senior year, he averaged 25 points per game, and he earned All-Western New York honors. In both his junior and senior years, Lanier led Bennett HS to city titles, graduating in 1966, and the rest is Buffalo sports lore.

Today Lanier currently owns and operates Bob Lanier Enterprises, Inc., a promotional marketing company and is a member of Proforma network. From 2005 to the present day, Lanier has been serving as the NBA Cares Global Ambassador. Lanier routinely works with youth-serving programs that support education, youth, and family development as well as health-related causes.

Lanier was inducted into the St. Bonaventure Athletic Hall of Fame in 1975; the YMCA organization presented Lanier with “the Jackie Robinson Award” in 1981. In the late 1980s, Lanier helped the NBA launch its “Stay in School Program” and later helped launch its “Read to Achieve” and “Team Up” programs. As a special assistant to the NBA commissioner, Lanier traveled around the country speaking to kids about the importance of staying in school and learning to read.

In 2000, Lanier was the recipient of the Congressional “Horizon and Leadership Award.” Lanier received the National Civil Rights Museum Sports Legacy Award in 2007: It is awarded for his significant contribution to civil and human rights internationally in the spirit of Dr. Martin Luther King, Jr. The basketball court at Lanier’s alma mater, St. Bonaventure University, was named in his honor in 2007, as “Bob Lanier Court” in the Reilly Athletic Center Arena. Lanier was named a co-recipient of the 2009 “The Mannie Jackson – Basketball’s Human Spirit Award” in recognition of his passion for the game of basketball and his continued commitment to community service.