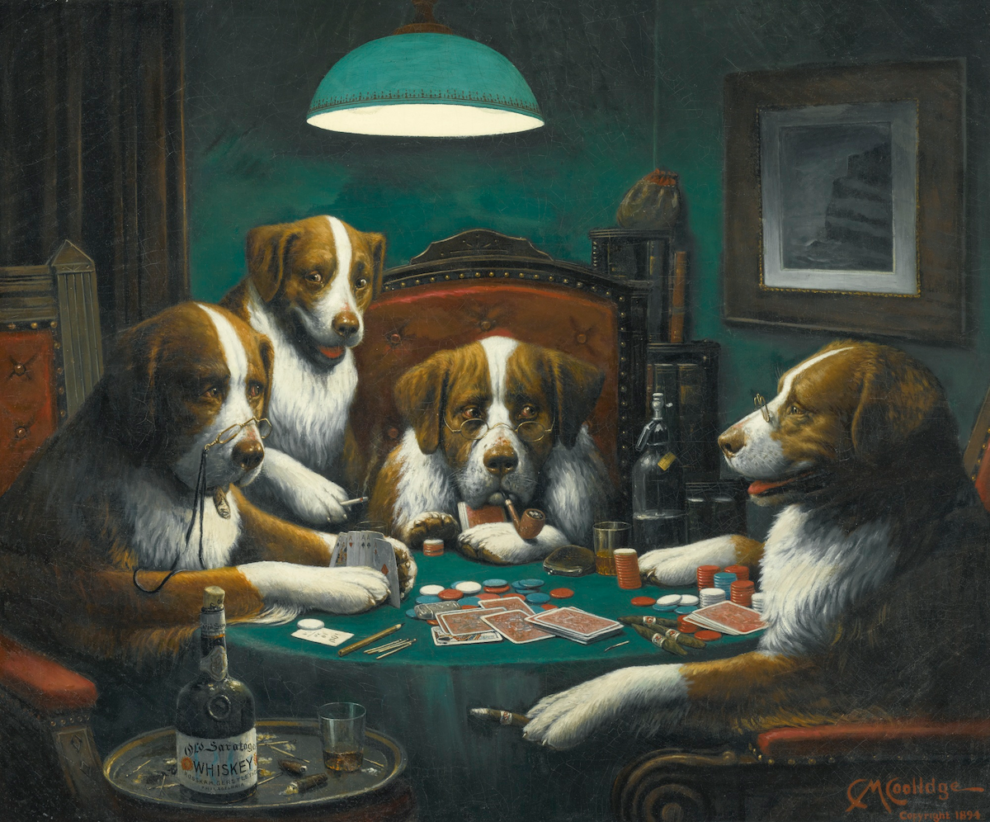 Most people aren’t aware of the strong link that exists between gambling and art. Whether it’s a writer who uses gambling as a metaphor for life, a filmmaker who incorporates casino scenes in their films, or even visual artists who draw inspiration for their masterpieces from casino games, these examples show that gambling has infiltrated the artistic community’s creative minds.

When you visit casinos, try and notice what’s on display. While most traditional casinos have an impeccable aura around them, paintings are also prominent at every corner. The way that gambling and art interact could be why traditional visual artists have loved to create art pieces of casino settings since the beginning of time.

Here are some of the most popular artworks that feature gambling in their art.

The American artist Cassius Marcellus Coolidge’s Dogs Playing Poker from 1894 is maybe the most well-known.

Coolidge’s unique art style can be seen in Dogs Playing Poker, which depicts anthropomorphic dogs gambling or engaging in other human activities. Some may raise an eyebrow at his paintings, dismissing them as pointless or superficial, yet they truly represent a magnificent metaphor about human life.

At The Roulette Table

At the Roulette Table is a work by Edvard Munch, a Norwegian Expressionist painter best known for his 1893 painting The Scream.

During his tour to Nice, in southern France, Munch visited the Casino Monte Carlo and painted At the Roulette Table. The atmosphere prompted him to create the masterpiece as a reflection of his memories and feelings while inside the traditional casino.

Who knows…maybe if this painting was created today, it might have been calle At the Online Roulette Table, given the recent rise and popularity of online gambling in the US, as Michigan online casinos, and other state casinos, have re-focused some of their efforts online.

Argument Over a Card Game

The artist effectively portrayed a spectrum of feelings through this artwork, with negative emotions such as wrath and anger elicited, most likely as a result of losing the game or cheating – both of which are prevalent arguments, particularly in casual gambling contexts.

Last but by certainly not least, we have The Cardsharps. It is one of the most well-known and well-preserved paintings of the baroque genre by Michelangelo Merisi da Caravaggio, an Italian Baroque artist.

This picture presents a street scene in an attractive and realistic manner. A teenage cardsharp (one who cheats to win a card game) reaches for cards hidden beneath his belt, while an older cardsharp looks at the victim’s card to indicate his accomplice in crime. The painting’s dynamic composition simply made it exceptional, combining the significant creative features of various human emotions such as innocence, fear, and rage.