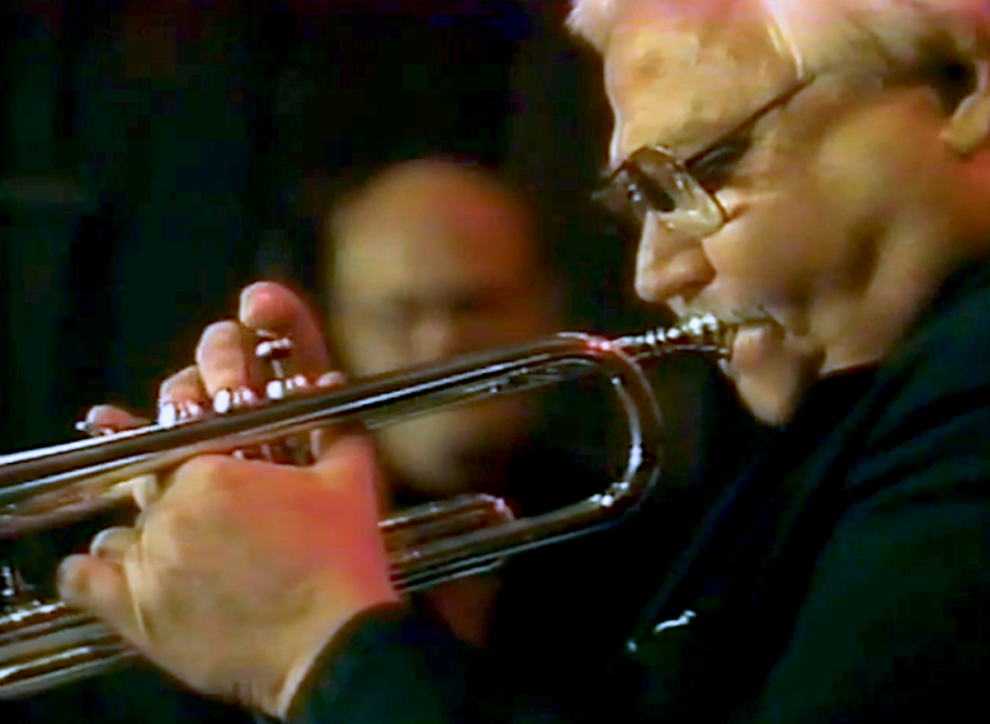 Adapting and surviving the unforeseeable trials and tribulations of the Great Depression in the 1930s and early 1940s were painful and disheartening for all that experienced it; in spite of these horrible economic times, Buffalo born-and-bred, first-generation Italian America Sam Noto persevered and never gave up on his dream to become a jazz trumpet player.

Everyone, including his family, thought trumpeting was literally and figuratively “his pipe dream,” but Noto’s burning desire to succeed motivated him to eventually achieve recognition as a world-class jazz trumpet virtuoso, “bravissimo.”

“When it comes to jazz trumpet players, one man’s achievements eclipses them all. Like a rare and seldom-seen comet, a jazz trumpet virtuoso like Sam Noto could only burst upon the Buffalo music scene once in a couple of centuries,” writes Phil Nyhuis of Jazz Giants. “It’s his passion, that unquenchable fire, plus a high level of technical skill and musicality that set Sam apart and can be heard on the many recordings he made over nearly 50 years as one of the world’s leading jazz players.”

In his biography, Sam Noto: A Life in Jazz, author Joey Giambra assesses the musical passion and contribution of Noto this way: “What Sam Noto has done with his life, and the love he had for what he did, defies description. This was, and still is, a musically philosophical and contemplative artist of the highest order who since his early youth has nourished his soul with his music, and to this, continues to do so.”

Remarkably it seems, Noto beat almost insurmountable odds against him, thankfully for him and his family, but there were trying times during the Great Depression that took its toll on Noto and his family; Noto painfully and vividly recalls the effects:

“My father lost his construction job and unable to find another, he couldn’t make the car payments and it was repossessed; they came and took it away. That was a sad thing for my father and for us kids, too. My father was unhappy, as were millions of others who couldn’t find work. Lacking income, we went on welfare. We couldn’t pay the rent, we didn’t have food, the whole thing. I knew lots of families from the Lower West Side went through that,” writes Noto.

Life during the Great Depression was hard on everyone, no one was exempt. The Notos toted a wagon to the welfare building downtown to get food: chunks of cheese, flour, butter, and all those necessities came from the welfare authorities.

Noto was born on the Lower West Side at 69 Busti Avenue on April 17, 1930; he was the third of five children (three boys, two girls) of Italian immigrants, Louis and Santina Noto from Sutera, Sicily, who originally immigrated to Birmingham, Alabama, in the early 1920s, yearning for a better life in the New World like millions of other Italians looking for the land of opportunity and freedom they heard so much of in sunny Italy.

Louis worked as a coal miner and stocked furnaces at a factory in Birmingham, adapting to a dreadful work life and lamenting: Where was the American Dream they had hoped for before leaving Sicily?

“Those early welfare years on the Lower West Side were rough ones. That’s all we knew. We were kids who played in the street and had a good time, but my parents were hurting because they couldn’t do right by us. My father was always bugged; angry because of work situation,” writes Noto.

The Notos moved to Seventh Street and everyday life was trying and gut-wrenching, a reflection of the desperate economic times, but we certainly know that kids will always be kids, and sometimes that means engaging in expedient things, both misguided and wrongful:

“We’d raid neighborhood fruit trees, and people with shovels would chase us. Then, if the people whose fruit we stole saw us on the street and recognized us, they told our parents. So when we got home, your father would give you a whipping for stealing. But we, me included, we’d never learn. We’d go back and do it again. We lacked material things – bikes, nothing with which to play,” recalls Noto. “When the delivery guy brought doughnuts to a store one of us would keep an eye on him, while outside others would raid the truck. Later, we’d eat doughnuts till we were sick to our stomachs.”

Noto decided he wanted to play the trumpet, but his parents could not afford the cost of $89 for a brand new trumpet; he was able to rent one from the school for $2 instead. “The whole trumpet thing had to start when I entered Buffalo Public School #76. I was about twelve years old, my first year in the band with Mr. Bish. I did that and practiced and practiced until graduating in 1944,” writes Noto.

“Mr. Weis, my high school music teacher, wrote a solo for me. I practiced, practiced, and practiced, and when I played it at the rehearsal I knocked everybody out. Then, I began changing the solo, a little, a little there, putting different notes, creating my own melody, and that’s when I began learning about chords, chord symbols, and different scales.”

After graduating from School 76, his parents and his older brother, Bill, did not want Sam to pursue his trumpeting. However, Sam wanted to go to Grover Cleveland High School or Hutchinson Technical High School to take advantage of its music program; he was overruled by his family.

“His brother, Bill, decided he should go to a vocational school and study printing, so he would have something to fall back on. Sam told them, ‘I want to be a musician, a trumpet player.’ His father agreed with Bill. So, Sam went to Burgard Vocational on Kenmore Avenue to take up printing, but he still played his trumpet,” writes Giambra. So much so that he was considered a “nerd” by other students because he would play his trumpet on the bus.

Noto started playing locally and at school events, gaining some publicity and momentum. He was given an unexpected opportunity to showcase his trumpeting, and young Noto took it:

“At 16, Sam left the linotype printing program at Burgard High School and went on the road with Allen Craig, a bandleader from Chicago, who fronted a typical commercial dance band. With his mother crying and his Sicilian father scowling, Sam and fellow trumpeter Al Bonati caught a train to Richmond where they joined the band and made $55 a week. The boys had to cover their hotel expenses of $1.50 a night. After the bandleader left with the girl singer and with two weeks of payroll, the stranded lads worked their way back home (Buffalo) to father Noto’s ‘I told you so’,” writes Nyhuis.

The next couple of years in Noto’ life were spent hanging out in Buffalo going to jam sessions, sitting in, and honing his skills at Banny’s on Niagara Street and other spots. Sunday afternoons were spent on Broadway and Michigan jamming at the Colored Musicians Local.

“Noto was learning more and more: tunes and chord changes that he’d apply to his playing style. He was happy to hone his skills and played any gig he could get, such as dances and casuals,” writes Giambra.

Fast-forwarding to 1952, Noto was gaining artistic momentum in Buffalo: He then began traveling with big bands and playing at gigs and then to large jazz audiences, and ambitiously looking for that big breakthrough opportunity. It happened that year. Noto was invited to play full-time and travel with the Stan Kenton band, providing the long awaited opportunity to be the lead trumpeter and do some memorable soloist performances.

“Noto became so proficient he was invited to join Stan Kenton’s band as lead trumpet player while still in his early 20s. He played with Kenton full-time until 1958 and again in 1960 after a year-long stint touring Europe with Louie Bellson and Pearl Bailey in 1959. He was a member of the Count Basie Orchestra for two separate periods between 1964 and 1967.

“He worked primarily in Las Vegas after 1969 until relocating to Toronto in 1975. It was while working in Vegas he became acquainted with trumpeter Red Rodney who was influential in Noto’s prolific recording career with Xanadu, producing four LP albums from 1975 to 1981 with the Don Schlitten’s Xanadu label.

“While in Toronto, Noto quickly became a first-call studio player and was a member of Rob McConnell’s ‘the Boss Bass’ for a number of years in the 80s. He also established his own successful groups including the Sam Noto Quintet, performing frequently on bandstands and concert stages throughout Toronto in the 90s and early 2000s.” Noto, indeed, had finally achieved his dream and the overarching American Dream as well, “ancora, ancora.”

Noto’s connection to Toronto is well documented and he plays with his band in Toronto. Noto has a strong contingency of Buffalo fans, and he continues to play with his Buffalo quintet and rehearse with a big band at the Sportsmen’s Tavern on Amherst Street. Nowadays, Noto lives with his family in Fort Erie, Canada, a stone’s throw from the streets of Buffalo where he acquired his formative musicianship.