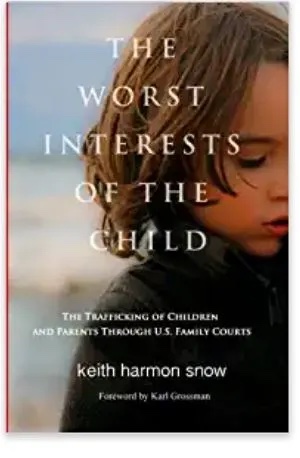 There is a vicious cadre of CT Family Court defenders. They raise a hue and cry that would tickle a tyrant’s heart. Let’s hear a rebuttal from Keith Harmon Snow. Snow is the author of the book: The Worst Interests of the Child.

Let’s start with something clear.

All this talk about “in the best interests of the child.”

There is no operating “in the best interest of the child” in the state of Connecticut.

The courts in the state of Connecticut turned into a private profit-based system of extortion and criminal racketeering that enriches lawyers, judges, doctors, and psychologists. Financial benefits drive lawyers and judges to create war in divorce court.

The system promotes the separation of children from parents and forces them into foster care. In the end, children are being trafficked to their abusers, and we’re talking about sex violations that are very easy to document and support…

I’ve examined over 25 cases here. I’ve interviewed over and over for this.  You need to talk to and understand what’s happening in the courts in Connecticut. And to write it off as saying, “Well, this balances that out there, and here…” is completely unconscionable.

There’s no balance. Let’s look at some specifics.

GAL Maureen Murphy billed Sunny Kelly’s case in Liberty versus Liberty at $300 an hour. And as time went on, Murphy became more and more involved in the daily business of “parenting” Max Liberty, who was being sexually abused by his father.

In this case, the GAL did not spend one hour with the kid. She spent hours and hours and hours, as much as possible, to rack up a bill of $83,170s for 277 hours of what amounts to interference and harassment of the mother.

From the beginning to the bitter final decision, Murphy took the father’s side in this case. She appears in many other cases, in some cases as the lawyer representing a guardian ad litem. This was before she became a judge.

And when she became a judge at her hearing, people brought forward complaints about Murphy.  They were written off even in the press as people went back and looked at the court records, and court records have been actually doctored.

The media didn’t point this out. Nobody pointed it out to the media. So the guardian ad litem is doctoring court records. Working in collusion with judges to extort entire financial fortunes from parents. Liquidate children’s accounts and children’s trust funds, liquidate retirement accounts, to destroy people’s lives, not to stop the process and bring them back together.

In Tittle versus Tittle in Waterbury Court, Judge Robert Risha forced Susan Skipp to sign over a $41,000 retirement account, which is protected from garnishment.

The other people that extort profoundly, beyond the judges, are the psychologists, the psychiatrists, the guardians ad litem, and the appointed court visitation supervisors.

Some visitation supervisors have criminal records. They’ve gotten away with major criminal operations. They’re not even documented in the state, and they’re picked by the guardian ad litem who’s been picked by the judge.

The first case I heard about was Liberty versus Liberty. I heard about it because a friend I was working with was coming back and forth from Massachusetts to Connecticut, where she lived with the parent Sonny Kelly, and the father was abusing Max.

I heard about this over three or four years ago, and for two years, I completely denied hearing that his father was raping this child, and the court sent the kid back to the father.

I refused to accept that the idea of sexual violence of a child like that by the court supporting the father terrified me, and finally, as an international human rights investigator and a journalist, I couldn’t ignore this story.

I went to prove that it was not true. I couldn’t believe that this was happening to the mother, so that was over four years ago, and I spent two years listening to the complaints. Then finally, I spent five months investigating them, where I looked at Liberty versus Liberty, Boccia versus Deback, Bugsy versus Bugsy, Tittle versus Tittle, Zefarro versus Zefarro, Foley versus Foley, D’Angelo versus D’Angelo, Yannick versus Yannick, Taup versus Taup, Gill versus Gill.

In the case of Liberty- Liberty, the supervised visitation was forced on the mother because every time she brought forward evidence of Max being raped by his father that evidence was suppressed by the opposing lawyer, who went about proving that she was suffering from something called parental alienation syndrome, and that in fact is a discredited psychobabble theory that should not be entered into the court system in any way whatsoever.

Keith Harmon Snow is a three-time Project Censored award winner. A journalist, photographer, and writer who has worked in 45 countries.

A former staff writer and photographer for the Japan International Journal, his works appeared in major Japanese newspapers, including the Yomiuri Shimbun and Asahi Weekly. Snow worked at the International Criminal Tribunal on Rwanda and as a journalist accredited with the United Nations Observers Mission in Congo (MONUC), human rights investigator for Genocide Watch, and genocide investigator for the United Nations in Ethiopia. He worked as an independent journalist and human rights investigator in Afghanistan and Mongolia.

He was the 2009 Regent’s Lecturer in Law & Society at the University of California Santa Barbara, recognized for his work contesting official narratives on war crimes, crimes against humanity, and genocide.

In 2011 Snow testified at the International Court of Justice in Spain regarding the war crimes, crimes against humanity, and genocide committed by the high officials of the Rwandan Patriotic Front/Army. Snow provided expert testimony in U.S. Department of Homeland Security refugee asylum hearings and at a special U.S. House of Representatives hearing on genocide and covert operations in Africa.

He investigated corruption and trafficking of children and families in U.S. Family Courts and wrote the landmark book, In the Worst Interest of the Child.