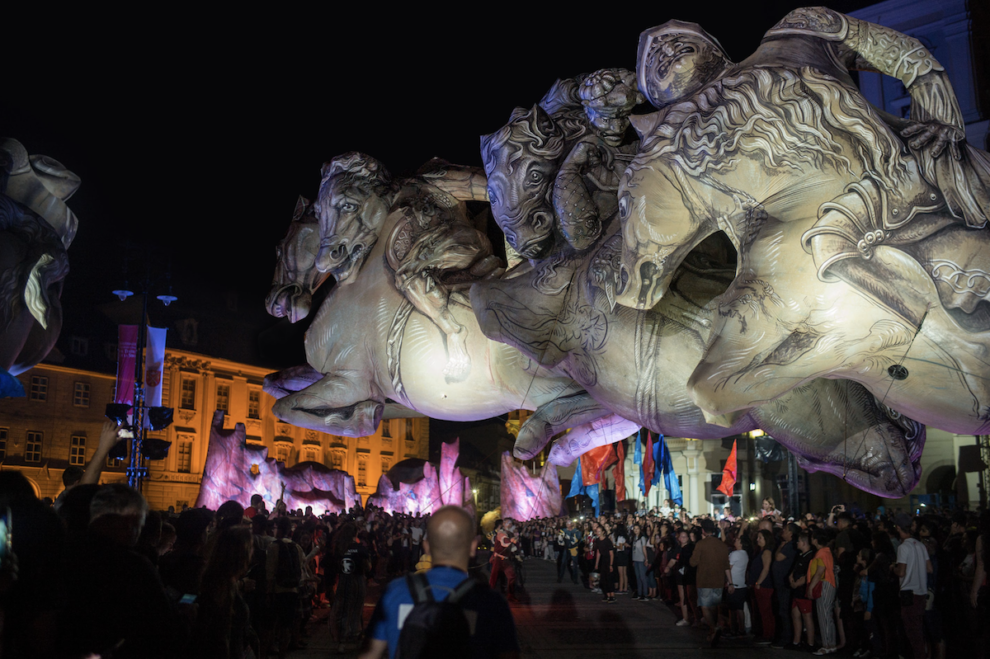 France’s spectacular Plasticiens Volants brings their outdoor spectacle to the skies of Lewiston, NY for the North American premiere of “Leonardo” at Artpark on August 20th

Artpark presents the return of Plasticiens Volants from Toulouse, France for the North American premiere of “Leonardo,” celebrating one of our greatest inventors, Leonardo da Vinci. Guests will witness larger-than-life helium-filled hand-painted inflatable masterpieces depicting Leonardo’s ideas, inventions and visions of life. All of “Leonardo” will be floating weightlessly above the audience and move through the skies at Artpark as the sun sets across the Niagara escarpment.

This special performance will be held on Saturday, August 20 at 8 PM. General admission tickets are $20 and are on sale now at the Artpark Box Office (Mon-Sat, 10-4 & one hour prior to events) and ticketmaster.com.

Returning to Artpark after their incredible U.S. premieres of “Big Bang” in 2017 and “Pearl” in 2019, Artpark is once again honored to host Plasticiens Volants North American Premiere of “Leonardo,” an all-ages journey into the mind and insatiable curiosity of Leonardo da Vinci.

With our dreams…let’s occupy the sky!

In the brilliant mind of Leonardo da Vinci, everything was connected — anatomy, mechanics, drawings of interlacing patterns, bird flight studies, and even the face of his Mona Lisa. His mastery of a wide-range of disciplines reminds us of the infinite possibilities of human understanding and that our minds and imaginations are limitless.

Plasticiens Volants is a 46-year-old institution based in Toulouse, France. Their unique street theater performances featuring giant original hand-painted inflatable creations have been seen in more than 23 countries by millions of people. They have performed at countless international festivals, major events such as the Olympic Games in Rio and Sochi and much more. Audiences have been eagerly awaiting their return!

Artpark is also hosting a Renaissance Carnival-style benefit prior to this performance in the Mainstage Theater Terrace. The event will include food by Oliver’s, open bar, auctions, plus admission to the “Leonardo” performance. Proceeds benefit Artpark’s not-for-profit mission and arts programming. To purchase tickets or for more information on this benefit please go to  https://www.artpark.net/events/artpark-carnival-2022-1

Visitor note: This performance will be held in Artpark’s lower parking lot at the South 4th Street entrance, and the area will be closed to traffic. Patrons are directed to enter the park via the Portage Road entrance for parking in the upper lots. Upon parking, guests can follow the brick road inside the park down to the South 4th Street lot. Shuttles will also be available. Guests may bring a chair or blanket to be used in designated areas.

How Much Do Dental Implants Cost? Here’s How To Organize Your Budget
Top 5 Unique Casinos Worth Visiting at Least Once in Your Life
Comment