Mohamed Abdullahi Mohamed, whose popular nickname is “Farmajo’ (Italian for cheese, from the imperial days of the Italian Somaliland) is president largely in name only since he the government he leads is not a functioning government and controls only small slices of territory. Somalia’s central government collapsed in 1991, and has not had direct elections since 1969. Mohamed was not elected directly by a vote of the Somalian people but by a vote of the 329 members of Parliament, an election which took place at the heavily guarded airport complex in the capital, Mogadishu, as the rest of the country was considered too dangerous to hold elections. There were initially 20 candidates for president. Sixteen had dual citizenship - nine held US passports, four UK passports and three Canadian passports. Unconfirmed reports said votes were being sold for up to $30,000 in a country heavily funded by foreign donors, and where most people living in the country are extremely poor. Mohamed won in the second round of voting over the runner-up, incumbent president Hassan Sheikh Mohamud. 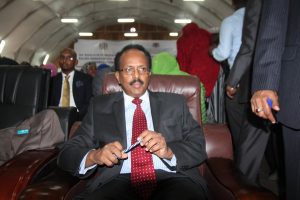