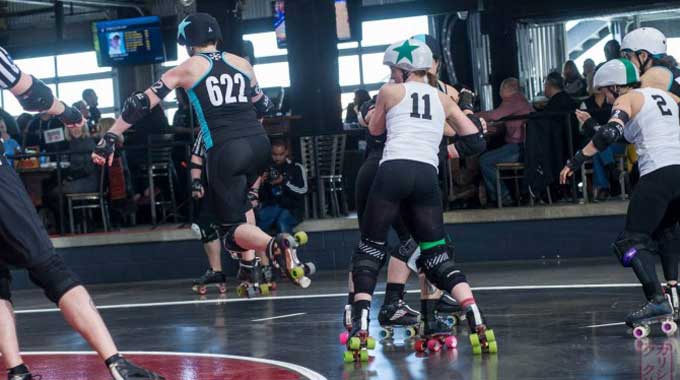 The Lake Effect Furies wasted no time asserting themselves on Sunday at their 2016 Season Opener, kicking off the bout on a 113-0 run before the visitors Roc City could even get on the board. From beginning to end the Furies were dominant and by the time the dust settled they skated away with a 406-52 win, giving up only 9 points the entire bout 5 on 5. The win was exactly what skaters, coaches and fans were hoping for to start this season and this type of performance will need to be repeated throughout their remaining sanctioned home schedule against Ithaca, Green Mt. and Killamazoo.

The win becomes the highest Women’s Flat Track Derby Association (WFTDA) score in Furies history (461), their 3rd highest positive point differential (+354), their third highest all time single game increase on Flat Track Stats and pushes them to their all time highest Flat Track rating (770). Controlling the game with 86% lead jam percentage, Roc City was forced to make up 43 of their points off of 6 Furies jammer penalties. Their jammers played with a lot of heart and determination, but the Furies blockers ground them down from start to finish.

Roc City played without star jammer GO! (Flu) and missed veteran blockers like Lethal Lorelai dearly in this bout. Ranked 76th coming in with an average WFTDA score of 233.76, Roc City come away with a lot of bumps and bruises and only 87 WFTDA points. Last year, almost to the day, they came to Riverworks and challenged the Furies to closer a 213-105 loss that netted them a 207 WFTDA score, above their 191 average at the time. This is the ruthlessness of the WFTDA ranking system though and Roc City is unlikely to gain any sympathy from the Furies – especially not after the Furies got to experience what playing Gotham feels like last year and while they will carry the 95 WFTDA score they received from that game around their neck like an albatross all season.

The Furies mental toughness in this bout was superb. There were no runs or momentum swings for Roc, they played clean and took fewer penalties than their average last year, and while giving up 7.1 points per power jam is still a bit high that is much less than last year. Panic didn’t set in, blockers dug in and did their job regardless of how many of them were on the track. The bout pointed more towards the finer points – jammers taking that extra second to shift their weight as they hit the pack, that extra second on re entry to leave the referees with no doubts. Ending the bout on a final jam with a 4-2 pack advantage for Roc and InSINerator taking a penalty was the first sign of slippage, but the rest of the game was so overwhelmingly positive and dominant it is hard to nit pick. The Furies actually increased their share of total points in that 2nd half – there was no let up.

As dominant as the jammers were this bout was more of a coming out party for the Furies blockers. Locked into to a system that looks tighter and stronger than last season the Furies blockers held Roc jammers for full 2 mins on their initial passes multiple times – creating massive jams and a nice test of their own jammers endurance. Bricks Hit House looks absolutely terrifying on the track for the Furies right now and their overall communication, reforming and timed offense is all greatly increased from D1 Playoffs in October last year. The video above shows a nice assist from Furies blocker Midnty Maniac as Librawlian pushes through the Roc blockers and Bricks holds a Roc blocker as a “goat.”

This is great news for the Furies, and a great statement game, but they now have under two weeks to prepare and keep this going as they head to the Quad City Chaos Tournament in Toronto, On (Canada) on March 19th to face more familiar foes – Tri City Roller Derby and Toronto Roller Derby’s CN Power. The competition will be stiffer and it will be up to the Furies to stick to the gameplan they executed in this game while lead jams become more rare and penalties may increase. With WFTDA weights of 2.56 (Toronto) and 2.43 (Tri-City), the Furies need a good showing against these teams to propel themselves back up in the rankings and into Division 1 Playoff territory.

They take back to the track at Riverworks this coming Friday with a mash up Expo of Buffalo’s two travel teams – the Furies and the Subzero Sirens – to work on their in game fitness and also have some fun.

The Sirens also came away Sunday with a dominant win taking the Roc City B Sides for a spin with a 290-94 win. The first Sirens bout for Queen City Junior Roller Girls graduate Veggy Cowgirl, she looked perfectly at home in the Sirens deep jammer rotation. Her, Dana Scullcrusher, Celery Stalk-HER and Double Barryl were relentless all game. The Sirens put up 145 points a half and only allowed 39 and 53 points for the B Sides. Undefeated this season, the Sirens move to 3-0 and the win shows that much more progress as they never had a momentum lapse in the 2nd half as they did in their first two bouts this year. Like the Furies they kept the pressure on from start to finish.

Tickets for the Mash Up Expo are available at http://www.qcrg.net/event/lake-effect-furies-opponent-tbd-8/.

Salute Spring With A Season: National Saison Day is March 12
Free Will Astrology