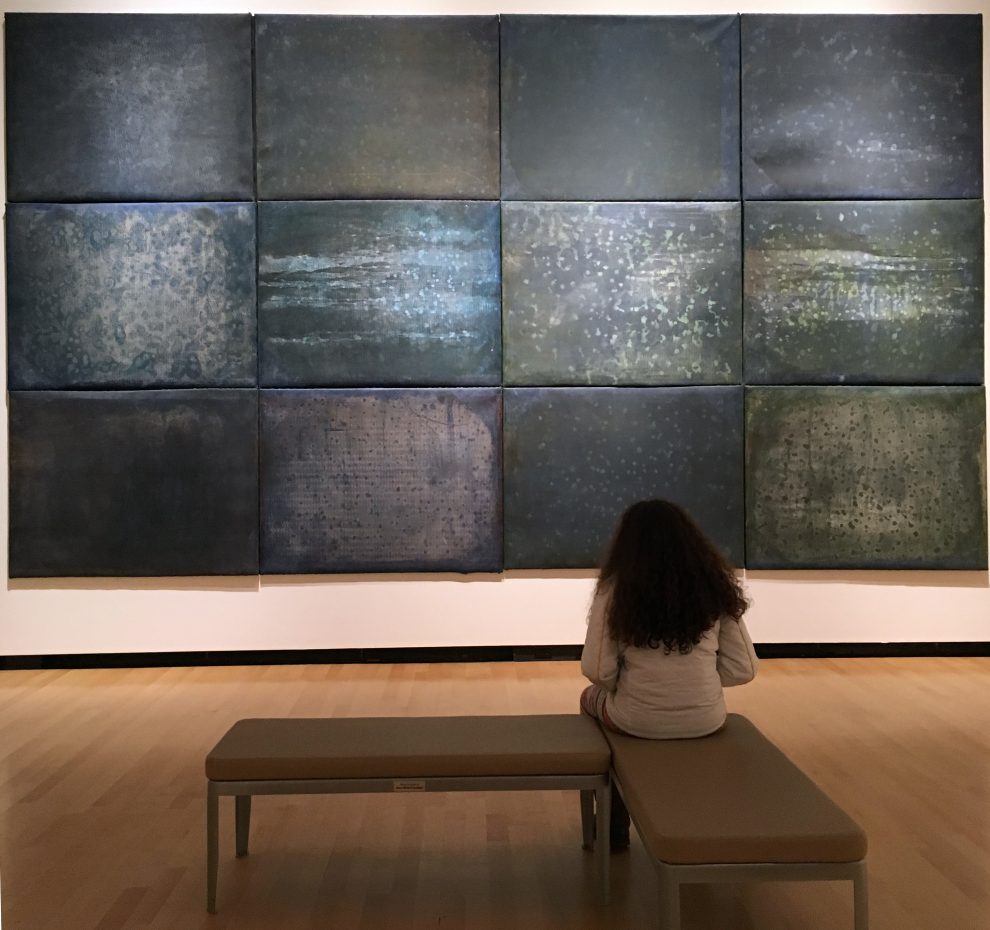 The descriptive labels for the works specify stretched and stitched and often dyed and sometimes painted.  Another significant descriptive of the black rubber panel works would be abraded.

In  a two-segment work, in one half of which–greenish in hue–the abrasion pattern suggests imbricated foliage, as a kind of wallpaper background behind or beneath the surface coloring.  (But what is surface, what is background?  Ambivalence as to surface and depth is part of the mystery of Drummer’s artwork.  Part of the allure.)  In the other segment, the other half of the work–basically pink in hue, fading to greenish in some border areas–the same pattern more or less, but harder to see, harder to read as foliage or anything identifiable else.  More industrial artifact than nature evocative.

Another work in two segments reads as some ancient deteriorated to the point of illegible manuscript–writing as sign but not message–in one segment, something akin but still further deteriorated–illegible even as writing–in the other.

Many of the works are in segments–up to twenty-one in one instance–usually with minimal differences from segment to segment.  Differences in tonality.  Differences as to dye or paint application, or abrasion treatment.  (However all of this is done.  How do you dye black rubber?)  But brush effects versus Jackson Pollock-reminiscent splotches and spatter.

A few of the works suggest imagery.  Landscape, cityscape.  Grid industrial patterns suggest fencing, partitioning, territorial boundaries, turf.  But barely suggest.  Further suggesting, that wasn’t the artist’s idea at all.  Not what he was getting at.  If he was getting at any idea at all, more than just the work itself.  The strange beauty of stretched and treated industrial black rubber.

The only overt imagery is in two works that are line-pattern-perforated then stitched like a baseball, but with black or white rubber ribbon instead of baseball red thread.  Both have a Japoniste quality.  Zen quality.  One is black on black in a pattern that looks random at first glance but after half a minute or so resolves into a lotus flower.  In the other, the stitching ribbon is sometimes black, sometimes white, in regular irregular patterns that resolve into cherry tree branches and blossoms.

There is one specifically sculptural work amid the wall-hangings.  Black, squat, square, a little like a tabletop, about four or five foot long on each side, and just a foot or so high.  Composed of pipe, tar, dirt, screen, metal, according to the descriptive label.  But tar for the most part–or tar and dirt amalgam–with the other listed materials half buried in the amalgam.  (And possibly more such materials completely buried in it.)  It’s a little reminiscent of an iconic sculptural work by Robert Rauschenberg of a taxidermied goat in a garbage dump eating tin cans and whatever else might be tasty.  Part of the point of the Rauschenberg work is the modern artist as goat.  Making art out of everything.  It was Jack Drummer’s principle as much as Rauschenberg’s.  Art from whatever’s available, whatever’s lying around.  Pipes, dirt, tar, industrial scrap, black rubber.

The work on show is heavy on the rubber.  A few works in the entrance to the exhibit–in addition to the sole sculpture–better illustrate the omnivore principle.  But the point of the exhibit is more than that you make art from everything.  The point is that you make it sublime.