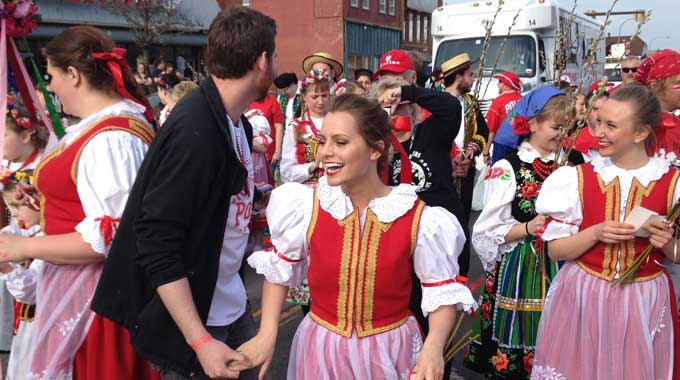 On Monday, March 28, Buffalo celebrates its Polish heritage with the annual Dyngus Day Parade and all the merriment that follows it. Now it in its 10th year, the parade is the brainchild of media entrepreneur and Forgotten Buffalo tour guide Eddy Dobosiewicz.

“I started the parade in 2007 after nearly two years of talking about doing it with Marty Biniasz and Russ Pawlak,” said Eddy. “Russ was then the president of the Central Terminal Restoration and Marty was on the board at the Broadway Market.”

On Monday, March 28, Buffalo celebrates its Polish heritage with the annual Dyngus Day Parade and all the merriment that follows it. Now it in its 10th year, the parade is the brainchild of media entrepreneur and Forgotten Buffalo tour guide Eddy Dobosiewicz.

“I started the parade in 2007 after nearly two years of talking about doing it with Marty Biniasz and Russ Pawlak,” said Eddy. “Russ was then the president of the Central Terminal Restoration and Marty was on the board at the Broadway Market.”

Their vision was that a big Polish celebration and parade would bring positive publicity to the Broadway-Fillmore neighborhood, which they dubbed the historic Polonia district. Pawlak provided the Central Terminal for a party gathering the first few years but Dyngus Day quickly outgrew that space. It’s unlikely anyone anticipated how much the event would grow.

“The parade started out with a few dozen organizations marching alongside a couple of pickup trucks,” said Eddy, “there was one band, three nuns and a guy in a kielbasa costume. This year we will have over 150 different organizations in three divisions, bands, dancers, shuttle buses, live coverage on Channel 7, 26 venues and tens of thousands of spectators and revelers.”

An online ranking of the top 10 cities with Dyngus Day festivals ranks Buffalo at the top of the list. “Nowhere else in the world will you find more pussy willows being plucked, polkas being played and more sausage being consumed than in Buffalo, New York on Dyngus Day.”

The success of Dyngus Day may lie in its uniqueness–the polka music and dancing, the quirky ritual of splashing women with water and women spanking men with pussy willow branches immediately sets it apart in a very fun way.

“But we also have tapped into a swelling Polish pride and nostalgia,” said Eddy. “Young Poles were yearning for an excuse to proclaim their ethnic exuberance. They were tired of being the punchline of “Polak jokes” and this was the perfect vehicle to unleash that torrent Polish pride. 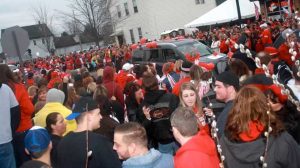 “In addition the neighborhood was a huge draw. Although the festival encompasses suburban communities like Cheektowaga, Lancaster, and Depew, the heart is on the old East side. Remember that the area surrounding the Broadway Market was the most densely populated neighborhood in Buffalo for decades. We were once the second largest Polish colony in the world outside of Warsaw. Millions of people had some connection to the streets and businesses of the “historic Polonia District.”  Either they lived or worked there or their parents or grandparents did. Our goal in bringing these descendants back into the area was to expose them to the historical significance of the Poles in Buffalo and the architectural focal points such as the Central Terminal, the magnificent houses of worship, the still functioning social clubs, the family owned taverns and the still standing infrastructure of a business district that rivaled downtown Buffalo for over half a century.

“As crazy as it sounds we thought it would spark entrepreneurship with young people because of the economic opportunities that seemed so prevalent. If a quirky parade is what it took to get them there then so be it. And quirky it is. No other parade on the planet has participants throwing out loaves of rye bread, kielbasa, or butter lambs in addition to beads and candy. We have had numerous weddings and couples meeting on Dyngus Day. I just ran into a couple at the Broadway market this past week with their 7-month-old daughter that met on Dyngus Day a few years ago. In fact her parents met on Dyngus Day about twenty years before that. I guess with them it’s a family tradition.”

A relatively new resident of Buffalo recently observed “it’s very cool how Buffalo has bookended Lent with parties.” That’s true. We go into the fasting and penance of Lent with a big Mardi Gras celebration and the day after Easter Sunday we come out of lent with another big party, Buffalo’s Dyngus Day celebration. It should be great fun, and if you’ve ever yearned to be spanked by beautiful Polish girl wielding a pussy willow branch, this is your chance.

For everything you need to know about the festival go to www.dyngusday.com. 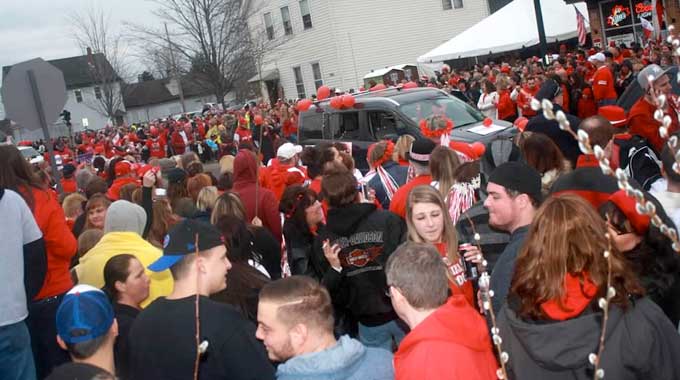