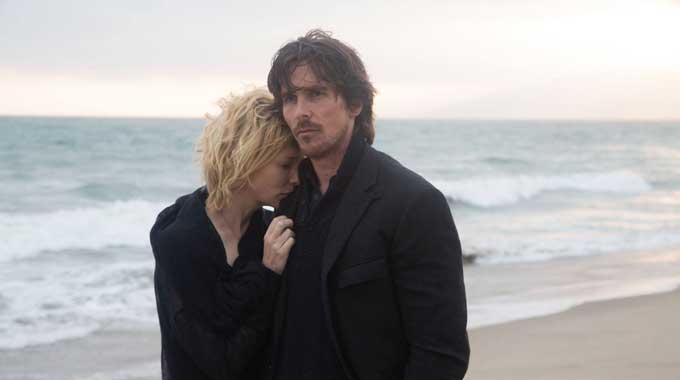 An urban symphony in six movements, Knight of Cups is a dizzying odyssey into the nature of perception, love, and the dual nature of the self. By turns euphoric and mournful, Terrence Malick’s seventh feature finds American cinema’s greatest philosopher-poet turning his gaze from the sun-kissed treetop canopies and wheat fields of the natural world to the towering structures of glass and steel which comprise contemporary Los Angeles.

An urban symphony in six movements, Knight of Cups is a dizzying odyssey into the nature of perception, love, and the dual nature of the self. By turns euphoric and mournful, Terrence Malick’s seventh feature finds American cinema’s greatest philosopher-poet turning his gaze from the sun-kissed treetop canopies and wheat fields of the natural world to the towering structures of glass and steel which comprise contemporary Los Angeles. Whether one is taking in the vast solitude of the California desert or the cold expanses of the Pacific, the most lavish of penthouse parties or the crowded city streets below, Malick captures his various locales with such a surprising depth of contrast as to transform the setting into a character itself.

Furthering his experimentation with a central character as a sort of structural absence, Knight of Cups concerns the spiritual crisis of the emotionally aloof Rick (Christian Bale), a high-paid, hedonistic Hollywood screenwriter and something of a stand-in for Malick, given that he worked as a script doctor during the early part of his career in the 1970s. Like Fellini’s Guido from 8 1⁄2, Rick seems to be stuck in a waking slumber, drifting in and out of various pool parties, executive suites, and empty studio back lots, just as his despondent voice over drifts in and out of the soundtrack freely. His casual sexual encounters with various beauties and his regular interactions with real-life celebrities (many surprisingly appearing as themselves, given the film’s modest budget by Hollywood standards) do little to shake him from his apathy. Like so much of the materialistic world he inhabits, Rick is little more than a consumer product to be used by other self-serving tools.

His reflections eventually turn to the suicide of his younger brother (an unfortunate episode from Malick’s own life), captured intermittently amidst his wanderings through the city of angels. Such moments give way to a series of episodes involving Rick’s memories of strained relationships with people close to him. Some of them are old flames, including his ex-wife (a suberb Cate Blanchett), a heartbroken married woman (Natalie Portman), and a cool model (Frieda Pinto). Other chapters explore his relationships with his brother (Wes Bently), his father (Brian Dennehy), and a corrupt associate(Antonia Banderas). Because no Malick film can be adequately described through plot summary, and because his use of montage and editing has grown increasing loose, one might have trouble even distinguishing between Knight of Cups different movements were they not marked by chapter headings named after other tarot cards. Why Rhodes Scholar Malick chose to assign certain cards to certain chapters (“The Moon”, “The Hanged Man, The High Priestess”) is likely to keep the die hard Malick fans endlessly speculating.

As has been the case with Malick’s last few films, characters exist less as fully developed personalities than broad archetypes symbolic for larger forces in nature, like Mr. and Mrs. O’Brien in The Tree of Life or lovers Pocahontas and John Smith in The New World. Similarly, Malick is not interested in rendering the people in Rick’s life as three-dimensional characters, but rather as avatars of memories and emotion, befitting his balletic direction of his female actresses. Conversely, Bale’s occasional blankness should be read as deliberate, since Rick is a man that has been left numb by the avarice his lifestyle has afforded, necessitating the spiritual catharsis he so frequently spends the film pining for. From an aesthetic viewpoint, I probably don’t have to mention Knight of Cups is visually stunning, at this point it’s practically a given every Malick film will be. Cinematographer Emmanuel Lubezki, Malick’s collaborator on his last four films, continues to remind everyone he’s arguably the greatest DP in the world. Shooting on both film and digital, Knight of Cups renders a vision of Los Angeles that is hauntingly familiar and comfortably alien. This affect is due also in part to longtime Malick production designer Jack Fisk, who previously immortalized the metropolis in Mulholland Drive and The Master.

It’s surprising to look back and realize that in 2011 when the once-reclusive Malick released only his fifth feature, The Tree of Life, a cosmos-encompassing epic rooted in his memories of growing up in 1950s Texas, the aging filmmaker would be entering the most prolific period of his career. Instead of  drawing upon historical episodes to explore his interest in philosophy and spirituality (The Great Depression in Days of Heaven, World War II in The Thin Red Line, and the colonial settlement of America in The New World), the director suddenly seemed more interested in looking inward at his own life for inspiration. The Tree of Life was his grandest and most personal film, and also his most radical, sharply dividing critics who either hailed the film as a wondrous masterpiece or derided it as a colossal bore. There’s really no middle ground with Malick, you either think he’s a visionary artist whose trademark use of imagery, voice over, and montage in place of traditional three-act storytelling has been beautifully refined, or he’s become a pretentious parody of himself.

Much like Malick’s previous effort, the small scale To the Wonder, Knight of Cups is unlikely to convert viewers already entrenched in either side of the debate. Still, when viewed as part of a whole alongside The Tree of Life, all three works enrich the others, forming a sort of thematic trilogy concerning different chapters in Malick’s autobiography. The individuals who occupy the spaces of Terrence Malick’s cinema are constantly yearning for transcendence, some kind of emotional reckoning with a power beyond their own, reaching out into the beautiful light no matter how vast the darkness, just as Rick searches his own memories for an answer to how he could have lost the good he once possessed. Malick doesn’t pretend to have all the answers, but by constantly wrestling with such questions through cinema, and asking us to do the same, perhaps he hopes that we, like Rick, can see the world a little more clearly by the journey’s end.