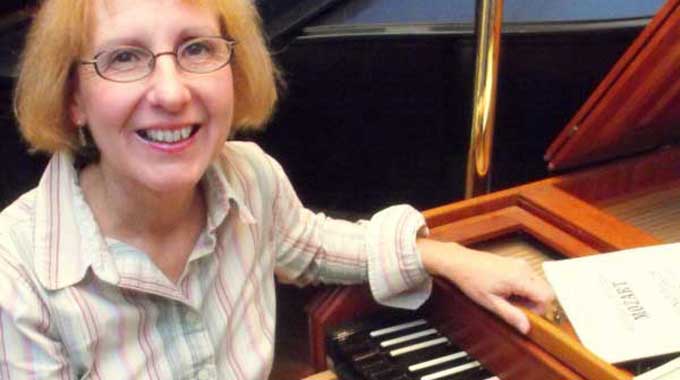 Karen Schmid plays Haydn, Mozart and Beethoven on the fortepiano

On Saturday April 16 at 3pm, Karen Schmid, an Oberlin Conservatory and Julliard School graduate who is a professor of piano at Canisius College will give a fortepiano recital in Baird Hall on the UB Amherst Campus. Karen describes herself as “a pianist whose specialty is fortepiano. I also perform on the ‘big’ piano, and teach on it, primarily.”

She says that she first fell in love with the fortepiano while a student at the Oberlin Conservatory. “They acquired a copy of a fortepiano, by Walter, a Viennese builder around the time of Mozart,” she says. “The piano was placed in a practice room and they let anyone have at it. I spent hours on that piano, marveling at the sound, the musical revelations it provided, and the degree of control I felt I had, owing to the substantial difference in touch. I also studied later at Cornell with Malcolm Bilson, the leading exponent of early piano in America.

“I love the early piano because it reveals musically what the composers’ markings mean. The instrument and the music are so intertwined, and it brings a completely new awareness of articulations, phrase marks, note length, and register balances. Playing on a fortepiano illuminates the sound world of the composers who wrote for the instrument and shows us really why they wrote the way that they did—their textures, and what their instruments were capable of playing, which was vastly different than the big pianos of today. I also love the fortepiano for its light, quick action, which requires more finger control than arm weight and strength, as in the big piano. What I do not like about fortepianos is their touchiness as far as tuning, action problems, and overall sturdiness – you are constantly fussing with them.”

“Haydn composed his Sonata in C Major (Hob.XVI/50), one of his last three sonatas, after he had the chance to travel to England in the 1790’s” says Schmid. “He encountered English pianos there, and saw the differences between the Viennese and English pianos. The English pianos were heavier, with thicker stringing and bigger hammers, and had foot pedals by this time, which enabled the performer to think of using the pedal to connect measures and blend sounds more. He experimented with using the knee lever in a similar way when he returned, and you have two unusual passages marked ‘open pedal’ which lets the knee lever act like a foot pedal and create an ‘effect’ – just for fun. The slow movement’s theme keeps returning in highly-ornamented and freely expressive forms, while the final movement is indicative of that musical humor Haydn is so good at”.

“Mozart’s Sonata in F Major (K.533, K.494) has two catalogue numbers”, says Schmid, “because Mozart later combined the final Rondo movement, written as an independent piece in 1786, with the first two movements, composed in 1788. It is his most contrapuntal work, very linear, with the second movement noted for its striking dissonances, and the third movement featuring a written out cadenza section, highly unusual for Mozart. In my opinion, it is a sublime piece”.

Beethoven composed his Piano Sonata No. 4, in E-flat major, Op.7 in November of 1796 in the Keglevich Palace in Bratislava, for Babette, the Countess Keglevics, his talented aristocratic student.  Somewhat surprisingly, this very early piece, which is approximately 28 minutes long, is one of the longest of the composer’s sonatas for piano, just behind the mighty Hammerklavier Sonata, a work composed more than 20 years later which takes 45-50 minutes to perform. “All the movements are conceived on a grand scale”, says Schmid. “It had a nickname in the 19th century ‘Der Verliebte’, the one in love, and is a mixture of brilliance, pathos, and sentimental lyricism. Maybe the Countess had something to do with that?”

“I choose all of these sonatas based upon the date of origin of the UB fortepiano, a replica of an instrument built in the early 1790’s. All three composers would have been familiar with this exact type of piano, and would have possibly owned one built by the same builder, Anton Walter, and wrote works with this specific piano in mind. This was their piano.”

“I would add that I wish all players and listeners could hear or play any piano work on the appropriate piano it was conceived for. In the 75 or so years of the pianos ascendancy, it underwent many changes, had numerous builders in various parts of the world, and composers were writing for the instrument(s) they knew in their world at the time of writing. Mozart never knew any type of piano but this one. Beethoven knew many other pianos into the 1820’s, since pianos changed so much even in that 20-30 year period. It brings great revelations to both the performer and listener to hear and play what they heard and played. You first of all understand the markings, which are easily doable on early pianos, and second of all you understand the texture in the registers of the early pianos, which allowed voices to speak equally.”