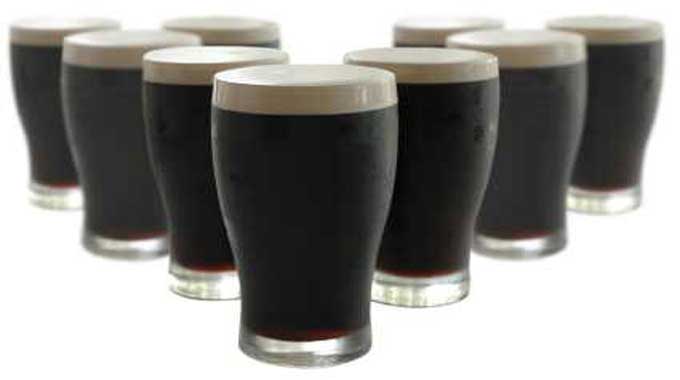 With two solid weeks of spring weather, it seems that winter will not relinquish its icy grip on Buffalo. While it is easy to lament the return of the cold temperatures and grumble about digging the snowbrushes out from the depths of our basements, there is also reason to celebrate

With two solid weeks of spring weather, it seems that winter will not relinquish its icy grip on Buffalo. While it is easy to lament the return of the cold temperatures and grumble about digging the snowbrushes out from the depths of our basements, there is also reason to celebrate. The falling temperatures may have Western New York staring helplessly to the sky, but the wise. Buffalonian knows that the greatest treat for the blustery weather is a stout poured thick, heavy, and dark, and at its freshest – from taps of the brewers that brewed it. Thankfully, our local brewers love to brew fantastic stouts that rival even the best imports.

Since Resurgence Brewing’s soft open, their Sponge Candy Stout has dominated the tongues of Buffalo’s dark beer drinkers. It is a unique brew that uses sponge candy shavings from a local chocolatier. The beer is medium bodied with hints of caramel and chocolate. It’s not as sweet as the name might indicate, but the creamy sweetness finds a good balance with the bitter malts used. Resurgence also has their Chipotle Cinnamon Stout on tap – like a spicy hot chocolate to start your parade morning right. If you’re more in the mood for some hops with your coffee flavors, try Take the Black Trail, a black coffee IPA – innovative, fresh, and delicious.

Downtown Buffalo is home to Big Ditch Brewing. Big Ditch offers their winter seasonal Vanilla Oatmeal Stout. Traditionally full bodied, the oatmeal stout is a meal in a pint glass, and this stout is just that. The bitter chocolate flavors balance lightly with the house-made vanilla extract to produce a very drinkable stout. Also on tap is Towpath, Big Ditch’s imperial stout. At 9.4%, Towpath is just right for hauling tugs down a canalside road.

On the outskirts of the city, nestled behind the beer garden at Gene McCarthy’s is Old First Ward Brewing. OFW’s HO Stout is an amazingly full oatmeal stout. Like a deep, rich cup of coffee, this stout is shockingly enjoyable in its bitterness. HO would make a great base for roasting your corned beef brisket, and would pair incredibly with the salty cut.

Heading south, Hamburg Brewing’s Oatmeal Milk Stout is a full and sweet brew. The sweetness comes from the milk sugars used in fermentation, and the full body from the oatmeal used in the wort. OMS is a winter seasonal, so Hamburg has also bottled their imperial stout. Grounded is available in local grocers and bottle shops around Western New York.

Also adorning the shelves of your local grocery store is the jewel of Cattaraugus County, Ellicott Brewing Company’s Imperial Chocolate Cherry Bomb. Rich and sweet, this beer is a bomb indeed, in that the 8.2% ABV hides behind the cherry flavors. This is definitely a beer to share with friends after a night on Holiday Valley’s slopes. EBC also has several other stouts available in their taproom, and each are worth stopping by for.

The Woodcock Brothers Porter is a wonderfully chocolate treat; the beer is smooth and creamy with little of the bitter smokiness that porters sometimes lean toward. This brew is great with a meal or dessert, and is perfect for the slight chill that remains in the air as spring thaw begins.

Flying Bison’s Spot Coffee Stout is another WNY version of an imperial stout. The body is thinner than the others, with burnt cocoa and strong coffee flavor. Brewed with Buffalo’s favorite coffee, this imperial is available in four-pack bottles.

If you find yourself northeast of the city, Woodcock Brothers is pouring their Orange Chocolate Stout, which is a tasty brew created with chocolate malts and orange peel – a must have for St. Patrick’s Day, but also to fill any growler for upcoming holiday dinners.

If you have your eyes on another prize, closer to the end of the month, and you’re hoping for a basket full of Reese’s finest offering, it is suggested that you head south of the city to Olean, where newcomers Four Mile Brewing have their Peanut Butter Stout available. Happiness in a glass comes in many varieties, but surely, few as happy as this one – even if it is missing the jelly.

Despite the freezing temperatures, the Buffalo River has shed its icy skin and the swift current has returned to full strength; so flows the steady outpouring of Buffalo’s deepest and darkest beers. With each of Jack Frost’s jabs at your nose, fight back with a swig of the old sod. The cold weather may have worn out its welcome, but the Queen City knows how to ward of the icy fingers of a relentless winter – elbow to elbow at the nearest oak, with a dark pint and a warm smile.