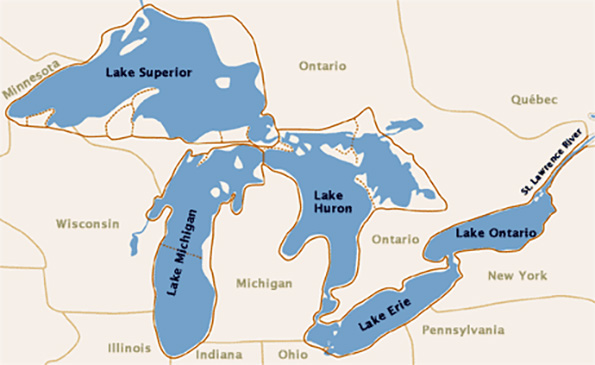 Later this month, and for the second time during his five years in office, Gov. Andrew Cuomo will make a decision that has enormous implications for the future of Western New York's water resources. The Governor will either deny or support the application of the small city of Waukesha, Wisconsin, which lies outside the natural basin of the Great Lakes, to access water from Lake Michigan in order to replenish its rapidly depleting municipal water supply. While the city's request has been winding its way through the regulatory pipeline for a number of years, the governor's office has given no indication regarding his intentions in terms of whether or not, as one of eight Great Lake states governors with veto power over the proposal, he will vote to approve the unprecedented water diversion.

The first crucial and pivotal challenge confronting the governor with respect to water, of course, culminated in his administration's 2014 prohibition of the practice of high-volume hydraulic fracturing, or "fracking", in New York State. In that case, most who were active in the movement against fracking, while appreciative of the final result, privately agree that Cuomo was dragged kicking and screaming to the decision.

At various times in the years leading up to the final and comprehensive frack ban, state agencies had floated various trial balloons involving "pilot programs" and "test wells", at first with the potential to be widespread but later restricted to four economically-depressed Southern Tier counties. Draft State Energy Master plans made oblique references to the implementation of hydrofracking here, and prominently factored fracked gas in the state's future energy portfolio as a "bridge fuel". Finally, the DEC's and Commissioner Joe Martens' assertion that fracking could be safely regulated here in New York, similar to the pap we're hearing from the Clinton campaign lately, was rightfully discredited by the time Cuomo's thumbs down on fracking became a fait accompli.

Confronted by an avalanche of scientific evidence documenting dangers to the public health from fracking, and encouraged by thousands of loud and raucous protesters who crammed into the Empire State Plaza during his State of the State speeches, Gov. Cuomo reluctantly banned fracking.

Cue up the next battle of the water wars.

Waukesha, WI, with a population of approximately 70,000, has a problem. The deep wells that have supplied the city's water for over a century are drying up. Worse, since they are diminishing, the concentration of a certain contaminant brought up from deep within the earth, the carcinogenic element radium, is increasing. The city has been under orders from the EPA to find another source of water.

A November 19, 2002 article in the Milwaukee Journal Sentinel made clear that the EPA had warned Waukesha as early as 2000 that remedial action was required to bring the radium levels down to acceptable standards, and the city's reaction? Sue the EPA.

"Waukesha… would have to spend an estimated $67 million to rid its water of radium," it is reported, and "has spent nearly $500,000 in legal fees and research in an effort to disprove that radium poses a danger at levels… found in Waukesha water."

"(T)he city will need to find another source of water in the future to serve the demands of a growing population and industrial base… (and) is also looking toward Lake Michigan as a potential water source." Sixteen years later, a decade and a half during which the city could have implemented any number of conservation and water savings strategies to cope with its predicament, as so many other communities across the country have, Waukesha's solution is to tap into one of the sole remaining bodies of freshwater extant on the planet.

"What's the problem with that?" the reader may well ask, "Aren't there billions of gallons of water in the Great Lakes, and wouldn't a city a mere 17 miles from Lake Michigan have a right to some of it?"

Enacted by Congress and signed into law in 2008, The Great Lakes-St. Lawrence River Basin Water Resources Compact established a council comprising the eight states bordering the lakes, Illinois, Indiana, Michigan, Minnesota, New York, Ohio, Pennsylvania and Wisconsin. A key provision of the compact is that no municipality located geographically outside of the Great Lakes watershed is allowed to draw on its water.

However, even though the city limits of Waukesha lie 1.5 miles outside the watershed boundary, a technicality in the statute enables towns, villages and cities of counties that straddle the boundary to be eligible to apply for a special exemption to help themselves to the abundant and seemingly boundless natural resource, and that's precisely what Waukesha has done. All eight governors must approve the application for the withdrawals to move forward.

A letter sent to the Council by 41 conservation groups outlined reasons why the application should be denied. "The City of Waukesha: 1) does not justify why it needs so much more water than it is currently using; 2) does not consider all reasonable alternatives to provide potable water for its residents; and 3) proposes to divert Great Lakes water to communities who do not need it."

It's perhaps 3) that is the most alarming. In fact, Waukesha administrates a water service supply area that forwards water to three neighboring towns and the nearby city of Pewaukee, all outside of the Great Lakes watershed. If the water diversion is approved, could the lawns and golf courses of Arizona, and the fountains of Las Vegas, be added to this network?

There's a history here to be told as well. It's the story of the American experience of environmental exploitation, belatedly coming to the realization that, as singer Joni Mitchell put it, "You don't know what you've got 'til it's gone."

Back in the late 1800's Waukesha had scores of natural mineral springs. One entrepreneur began bottling the water, and shipping it out by the barrel as a cure for diabetes. The town garnered a national reputation for its healing waters and, at one point, planned to pipeline the water to Chicago's 1893 World's Fair.

Then more people moved in. The springs got contaminated from outhouses and storm drain outflow. A nearby quarry drew water away. The city dug deeper and deeper wells, but couldn't keep up with the burgeoning demands from a growing population, unregulated water usage and lack of intelligent planning. Now it's thirsty.

And they want is a sip, just a little sip, mind you, of the Great Lakes. Pending Gov. Cuomo's approval, that is. Given that the public hasn't paid as much attention to this issue as they did fracking, and Wisconsin is a swing state important to the governor's future presidential aspirations, they'll probably get it.