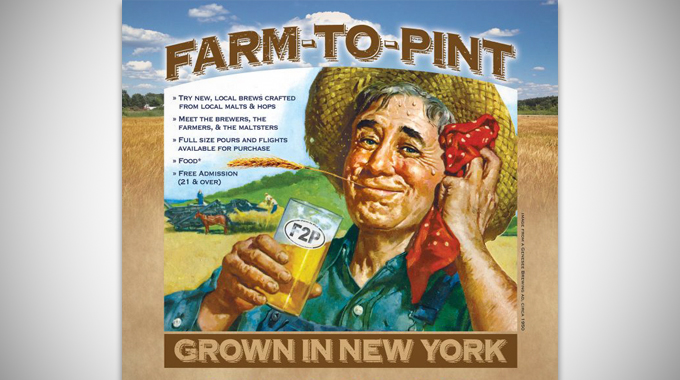 “F2P celebrates Buffalo Niagara’s exciting new growth of hops and small grains farming which has given local brewing companies the ability to produce craft beer from local sources right here at home,” said Willard Brooks, Chairman of the BNBA Board of Directors. “The addition of so many independent, locally owned breweries is truly making Western New York a real tourist draw for craft beer and food enthusiasts alike.”

John Russo, owner of Hamburg Brewing Company, the site of Farm to Pint for the third straight year, says that an event such as this is an important one because ‘the idea of farm to pint is more than just beer.’

“It’s important to use locally grown ingredients because it supports those around us who do grow local ingredients and to let the consumer know ‘Hey, this stuff was grown down the road,’” Russo says. “It’s for the same reason people purchase food at farmers markets, fresh locally grown product. It’s also not just about hops and barley. This region is great for extracting maple sap from trees and making the commonly known maple syrup! We want to promote Farm to Pint because it draws attention to a topic that is sometimes overlooked when it comes to beer. Most people do not realize that you can make beer from ingredients grown in your own backyard. The idea of farm to pint is more than just beer. It’s a fun way to interact with those who make up the different steps it takes to get the liquid in your glass.”

The growth in the craft beer industry is supported by Governor Andrew Cuomo’s farm brewery bill, which calls for designated “farm breweries” to use, until the end of 2018, at least 20 percent NYS hops and 20 percent of all other ingredients in their beer, a number which rises to 60 percent from January 1, 2018 to December 31, 2023 and 90 percent from January 1, 2024. Both Hamburg Brewery and Old First Ward Brewing are now designated as “farm breweries.”

Russo says that HBC brews a handful of beers throughout the year that utilize the best of what NYS sourced ingredients have to offer.

“Hamburg Brewing uses local ingredients as often as they are cost effective and available,” Russo says. “We have a beer called the “House Dressing” that is available year round. We also do a wet hop beer every hop harvest where we pick hops grown locally and on site here in HBC’s half acre hop yard and brew with them within 48 hours. Beers like this provide great hop flavor and aromatics due to the extra oils on the plants when picked. In addition to these beers, we have our annual Farm to Pint event beer debuting on May 15th. That beer is made 100 percent NYS ingredients!”

Farm to Pint will be held at Hamburg Brewing Company, located at 6553 Boston State Road in Hamburg, on Sunday, May 15th from 12—8pm. In addition to all of the beer, there will be locally raised meat and vegetarian grilled skewers available for purchase throughout the day. The event is free and open to the public.

“People should come check out Farm-to-Pint for a variety of reasons,” Russo says. “The first is of course that there is beer, but also there will be the people responsible for getting it into your glass. There will be brewers and representatives from 11 different WNY region breweries, hop farmers, barley farmers, maltsters, local chefs, etc. In addition to that, nowhere else will you be able to try all of these locally grown beers in the same place. It really should be another fun day at Hamburg Brewing.” 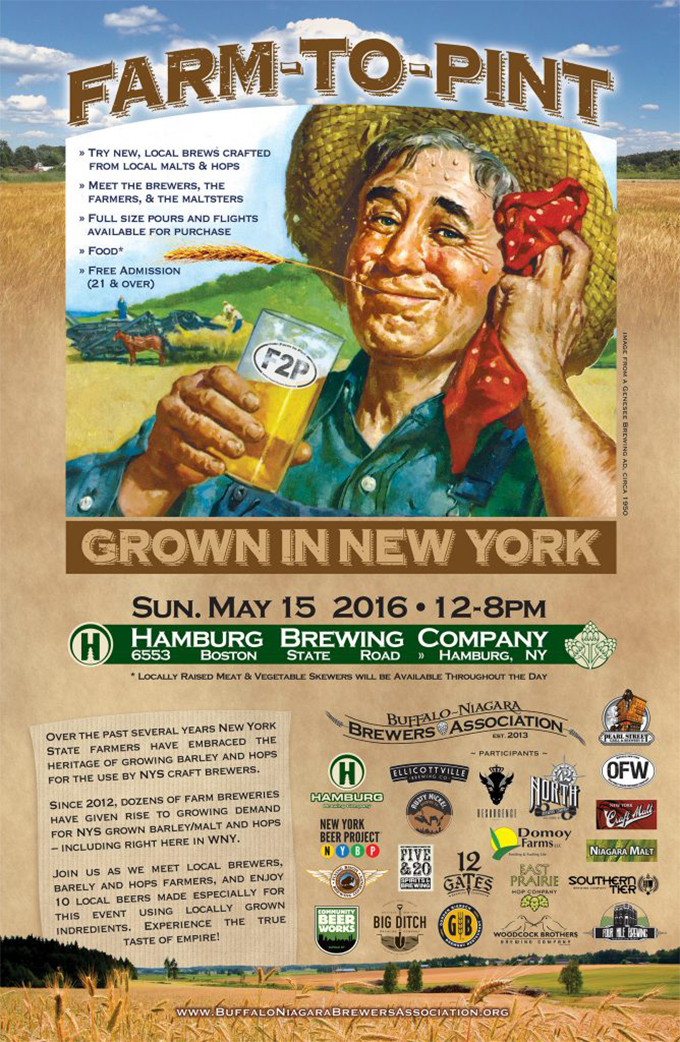